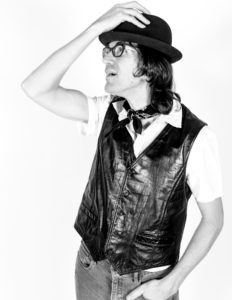 Where the Buffalo Roam: Greg Klyma

This is the start of a new series of stories and interviews focusing on Buffalo and Western New York’s contributions to the world: our musicians.  Every Where the Buffalo Roam segment will focus on an Americana-related musician who has gone on to fame and — sometimes — fortune outside the boundries of our fair region.  Our first guest is Greg Klyma, who has been making  his living on the road as a musician for about 20 years now. He has made the Boston area his home base for a number of years now.

EP: What can you tell us about your new album?

GK: That all depends on which album you are talking about. If you mean the one I’m currently recording, the working title is “Maybe the Ocean” – it’s introspective as all get-out with rock production. Most of it was tracked live. After a few harmonies are overdubbed and probably some keyboards, too, it’ll be finished. I hope to have it available for folks in one way or another by June. Probably on Bandcamp.com.

If you mean the one I’m dreaming up next, it’s gonna be a country album. I have a bunch of tried-and-true songs (like “Why I Oughta” and “Davidson Country Beauty Queen”) that I need to get out there. I really dig recording live with the guys I play shows with. They know the songs inside and out, and we work fast together. The songs are country. The production will likely be… Americana?

The album that I just released on Bandcamp in follow up to “Never Knew Caroline” is called “FAKE SONGS.” Initially, I was going to release each song as a single on a streaming service called The Standing “O” Project. That platform closed shop at the top of 2019. I was kinda stuck and needed to recoup what I’d spent recording the songs. So, it’s up on BandCamp now. Folks can download it here:
http://klyma.bandcamp.com/album/fake-songs

EP: While your last album, the LP “Never Knew Caroline,” seemed to have a thread running through it about relationships ending, this new one seems to be more along the lines of “Greg Klyma and the Meaning of Life.” Any thoughts on that?

GK: Yeah, a few of the songs on “Caroline” were my reaction to a toxic break up. I was working it out. Sonically, those songs fit with some others that I’d written in the years leading up to the break. When I wrote the title track and the album closer, “My Old Guitar,” it all crystalized.
“FAKE SONGS” is the album I was conceptualizing when I recorded “Another Man’s Treasure” in 2013. I just didn’t have enough strong enough songs to pull it off the way I wanted, so I put it on hold. After looking inward with “Never Knew Caroline,”  it was a natural swing of the pendulum to look outward and “FAKE SONGS” was the perfect vehicle for it.

I don’t know about the meaning of life, but the songs are definitely a reflection of the world we’re living in. Everything from the blame game and PTSD to the need for kindness and empathy. Hey, and you can dance to it.

EP: You’ve lived away from Buffalo for a long time now — close to 20 years. How much does your Buffalo background affect your work?

GK: I was born in Sisters Hospital and raised in Cheektowaga in the ’70s and ’80s. As much as anyone’s formative years informs the way they carry themselves, I am forever a Buffalonian. I’m sure it shows up in ways that I don’t even realize.

EP: When you look back at the Buffalo scene, who are some of your favorite musicians?

GK: From 1992 until I started touring full time in 1998, I spent just about every Friday at Nietzsche’s, catching the Fibs happy hour. Tom Fenton and Jim Iarocci are two of my favorites. I’m nostalgic for Scott Carpenter and the Real McCoys. So much so that I recorded Scott’s song “Signpost” on “Another Man’s Treasure.” And not that I want to sound like everybody else in Buffalo, but I love Jim Whitford. The Pine Dogs are still one of my favorite bands ever. “Poison in the Well” is great. And more than any other musician – until “FAKE SONGS” – I think Jim has been on most of my recordings in one way or another. He’s the best.

EP: You’ve been making your living as a musician since you left town. Not a lot of people are able to do that. What are some of the biggest challenges?

GK: Part of the reason I moved to Massachusetts is because this state got hip to health care years before the Affordable Care Act was a thing. Being a prolific writer, as it turns out, doesn’t pay the bills. I suck at “straight jobs,” and I don’t have a gimmick other than keeping my nose to the grindstone. So yeah, man, in a capitalistic culture where a sad majority of people do not value creators, the challenges are unending. The fuck all of it is I just can’t imagine doing anything else. So I live hand-to-mouth, eat healthfully as I can, and appreciate the good stuff when it comes my way.

EP: So how many albums have you put out, going back to your Stone Church days?

GK: Geez, do I have to count the Stone Church albums? (narrator pauses to count on his fingers) …

Not counting the one in progress, I think I’m at 12. Check back later this year.

My whole deal right now is that I have notebooks full of songs that’ll never be heard. Granted, some of ’em ought not be heard — hundreds of ’em are terrible songs. But there are a bunch of really good ones that I want to record while I’m still capable. And I write new ones all the time. ALL the time! Starting with “FAKE SONGS,” I intend to release three albums this year. If I can keep it going, I’ll have a couple more ready in 2020.

Back to your earlier question about challenges, paying to record my songs! I’m really lucky to be working with musicians who believe in me and these songs. They are giving me the family rate and we’re working fast to keep the studio expense down. I’m trying something new by releasing the albums digitally. This cuts the cost of manufacturing CDs and as such is better for the environment.

Truth be told, if my fan base was bigger – if I was more in demand – I’d release all of ’em on vinyl. I released “NEVER KNEW CAROLINE” on vinyl. I’ll never get over the feeling of dropping a needle on my first (and so far, only) record.

EP: Which do you feel hold up best today?

GK: The albums I think will hold up the best are the newest ones: “Another Man’s Treasure,” “Never Knew Caroline” and “FAKE SONGS” are all keepers. I have never stopped working at being a better writer. I like to think it shows on these recordings.

Which hold up the best, though? That’s for others to answer. Ain’t it? Like, I get why someone might dig my older albums. For me, it’s about growing as a writer and an artist. For the listener, it’s often about the memories wrapped up in that time of their lives when they first heard a song.

I think the stuff I’m releasing now is the best I’ve done. I’m excited for what might come after a little more road under the wheels.

EP: Do you find yourself looking at the Weather Channel to see if it’s going to be 2 degrees in Buffalo (the title of one of his best-known songs)?

GK: Ha! I don’t have to. I get texts, emails and phone calls. Honest. Just a couple weeks ago in January, my dad called. I answer the phone and he’s all proud of himself, “I just thought you’d like to know it’s 2 degrees in Buffalo.” I could see him smiling as he said it. I love it!

EP: What do you see the future holding for a road-tested troubadour?

GK: That’s the $64,000 question. Right now I’m hyper-focused on recording songs while I can. I feel I’m at the peak of my abilities and want to capture all these songs and all this energy while I can. Also, as a companion piece to “FAKE SONGS,” I have a lyric book coming out. If that experiment is well received, I’ll see about doing more of that kind of thing.

I probably should be trying to make connections in Nashville, but if I had my druthers I’d buy a ticket to Amsterdam and traipse about Europe for a month. In the immediate future, more recording and more learning about how to spread the word using social media.

EP: And your next show in Buffalo?

GK: My next show in Buffalo is at Pausa Art House on Saturday, June 15, 2019. Best for folks to get tickets now. Hometown shows are special events and Pausa’s capacity is 75. Here are a couple of helpful links: