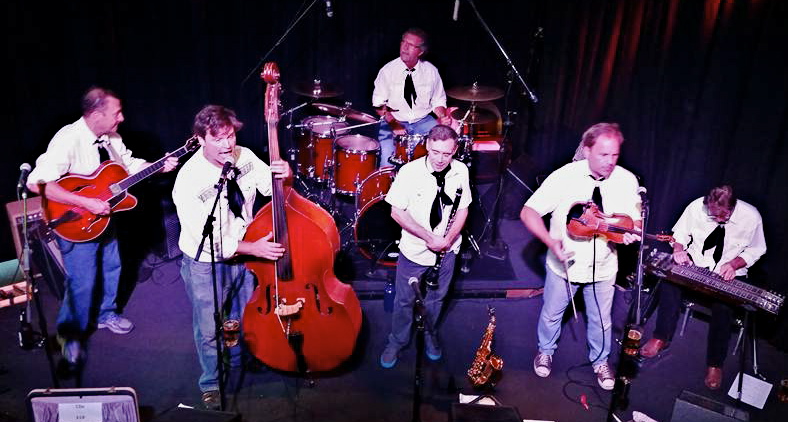 The Skiffle Minstrels have a gift for everybody who’s been housebound for the past 11 months, guaranteed to make you get up and dance around the living room. 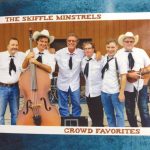 Well, OK, you do still have to pay for it, but “Crowd Favorites,” their new CD, is out. It seems seems like a phone call from an old friend and, as Dick Clark’s Bandstand kids used to say, you can dance to it.

We got a chance to catch up with Skiffles singer and bass player Paul Todaro recently to talk about the new disk.

The album was actually recorded during the pandemic at Holt Studios in Mount Morris. The rhythm section of Todaro, drummer Bill Hutchison and guitarist Phil Knoerzer played live in the studio.

The studio is small, Todaro said, but “it’s just big enough for three people to stay distant from each other. The drummer was in a booth and bass and guitar were in the same room about 8 or 10 feet apart. And the engineer, of course, was in a booth. So we felt pretty safe doing that.

The Skiffle Minstrels at the Sportsmen’s Tavern.

They recorded 21 songs over two days in August. Then steel guitar player Jim Whitford, fiddler Chris Jones and clarinetist Dave Mussen recorded their parts at home to add to the mix.

The goal, as reflected by the CD title, was to give fans as much of a taste as possible of a live show.

The songs reflect the results of a poll Todaro took sometime back of fans’ favorites from among the Skiffle Minstrels’ live repertoire.

“A lot of them are from answers from that poll … And then what are our favorites? You know, things that the crowd likes, the things that we often play,” he said.

Not surprisingly, since the Skiffle Minstrels have developed into a crack western swing outfit, the CD includes Bob Wills & the Texas Playboys standards such as “Take Me Back to Tulsa” and “That’s What I Like About the South” and their version of the jump blues classic “There Ain’t Nobody Here But Us Chickens.” 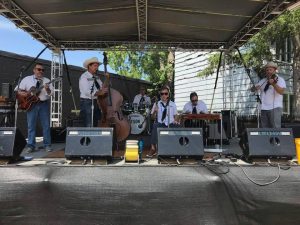 The Skiffle Minstrels on the Ameripolitan Festival stage.

The originals have appeared on the band’s other recordings, but these versions reflect the band’s current makeup.

The Skiffle Minstrels have been a long time coming to this point. Their starting point was somewhere around 20 years ago, Todaro said, when they came together playing at parties.

“The three of us that started the group were actors, we weren’t really musicians,” he said. “So something about ‘skiffle’ sort of implies an amateur in the true sense of the word, like a lover of something, someone who does something because they love it.”

The band was never a “skiffle” band in the sense of the British performers like Lonnie Donnegan (of “Rock Island Line” fame), but more like American jug bands of the early 20th century.

Todaro played guitars in the early versions of the band. Then he bought a stand-up acoustic bass. He’s self taught, and he says it took him at least a year before he dared play it in front of an audience.

But along the way, the band got more serious about its music. Todaro said that when the group started, it could be hard to get audiences that weren’t familiar with western swing to buy into it. 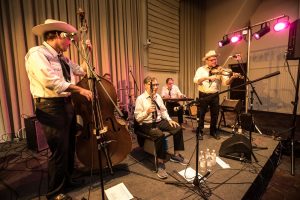 On stage at the Hotel Henry.

But as the band got better, it also developed an audience that appreciates the mixture of jazz and honky tonk that is western swing.

“And being legitimized, too, by being so embraced by the Sportsman’s Tavern,” Todaro said, “and that happy hour show’s been around for 15 years.”

While Todaro and crew may be serious about their music, they know what their goal is: to make people dance.

“It’s a nice guiding force for making decisions. ‘What song are you gonna do, how do I even arrange it? Todaro said. “Just keep in mind, ‘well, it’s a dance band.’”

Todaro said one of the things that has drawn him toward the music is that it’s dance music. He said before the Skiffle Minstrels started, he burned out on rock and downer songs.

“Is this really what music is for?” Todaro asked? “I don’t understand even listening to music like that, let alone playing it.”

So for now, Todaro and crew will be keeping people dancing in the privacy of their kitchens and living rooms. But they’re looking forward to playing out again and perhaps resuming their monthly happy hours at the Sportsmen’s.

Because as one of those originals on the CD says, “All God’s Children’s Gotta Dance.”