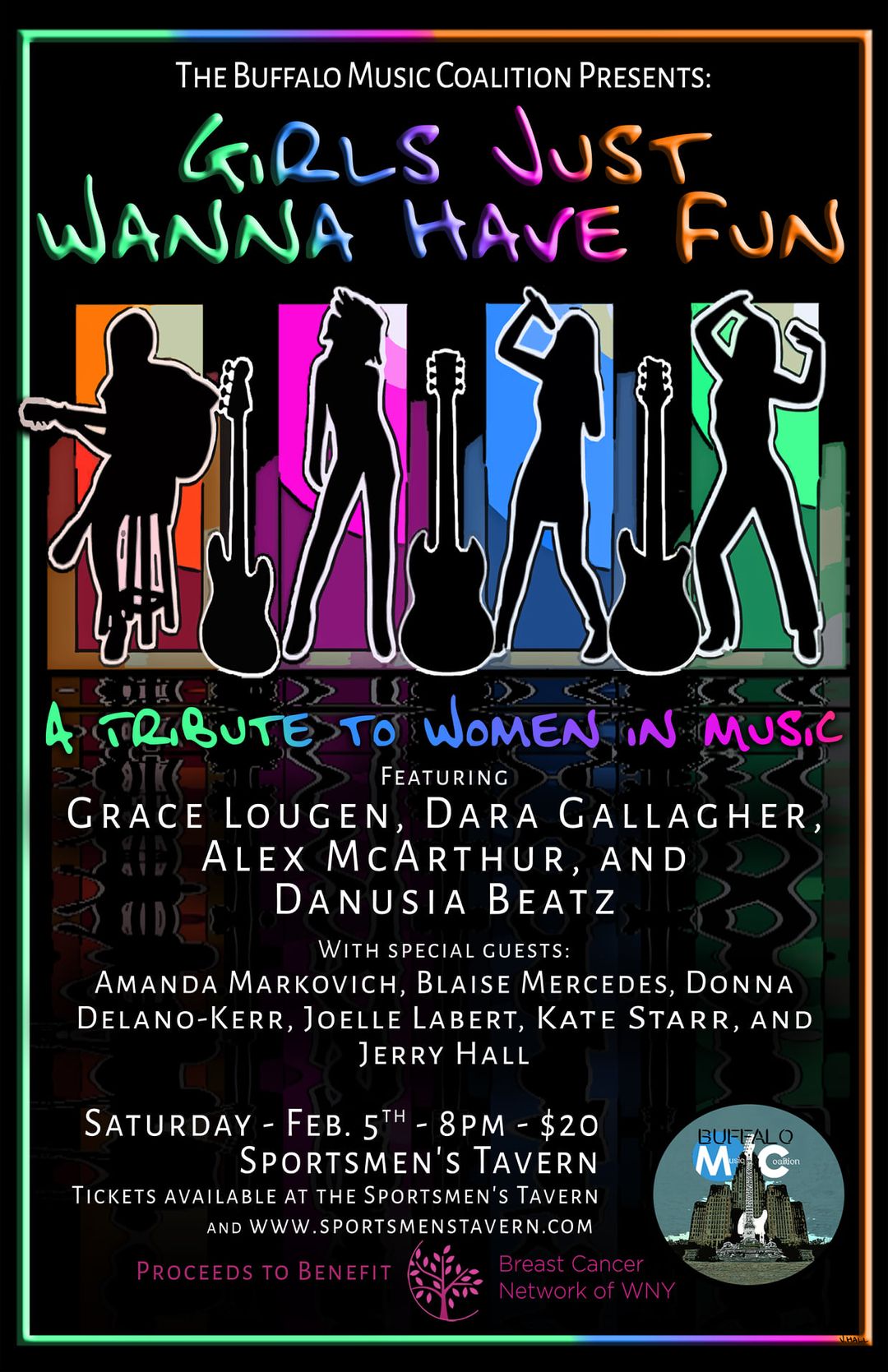 She’s in the Band: Girls Just Want to Have Fun

As a very famous woman once said in perhaps an even more famous song: Girls Just Wanna Have Fun.

And fun they shall have. 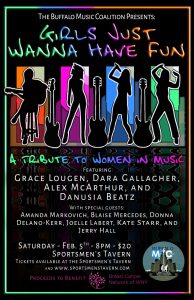 On Saturday, Feb. 5, concertgoers in Buffalo will be treated to the sound of all that fun. The Buffalo Music Coalition will be presenting its first major concert of 2022 in the esteemed halls of the Sportsmen’s Tavern.

The BMC was founded in 2018 and serves to “put on shows … that nobody else seems to be doing,” according to founder Robert McLennan (who is also a member of the SAM Foundation Board of Directors).

To date, its biggest success was the Woodstock 50th Anniversary Concert in August 2019, where Buffalo musicians played the roles of the artists of Woodstock and performed music from the famed festival.

This show, though, is all about the ladies

Girls Just Wanna Have Fun: A Tribute to Women in Music will consist of nine female and one male artist playing songs written and/or originally performed by some of the most recognizable women in music history. This is a show several years in the making, but technically, it all started in the Caribbean.

McLennan, the founder of the BMC, first thought of the concept years ago while watching a performance on a music cruise with his wife, Rose.

“One of the shows was a tribute to women songwriters … It was all women in the band and all women guest singers, except for two men, who happened to be Jason Isbell and Buddy Miller,” he said.

McLennan was inspired by seeing an all-woman band, as well as the two songs the token men of the show performed.

The man of the upcoming show, Jerry Hall, also a member of the Buffalo Music Coalition, will be performing a couple of songs, but the main focus will be on what McLennan really finds to be “unique and very special.”

This is female singers, who aren’t uncommon to Buffalo, accompanied by an all-female band, which surprisingly is. 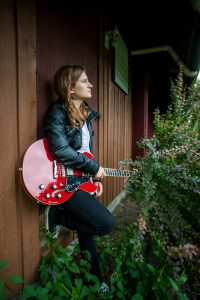 This reason is what has musical director and band guitarist Grace Lougen so excited.

Lougen is one of the most well-known guitarists in Buffalo and a self-described “hired gun,” contributing her talents to multiple local and regional groups and artists over her 13-year career. Her current home is in the band Grosh, where she plays lead guitar and supplies some vocals.

Lougen first signed on to do the show when it was supposed to premiere in April 2020.

After being postponed due to the COVID-19 pandemic, Lougen and other original performers recorded a cover of Patti Smith’s “People Have The Power” to give audiences something to tide them over until the real show could have a proper debut.

Later this week, Lougen and her fellow performers will reprise this song for a real audience.

The meaning of this song and the message of the show overall strongly resonates with Lougen.

“I don’t get to play these songs that often and I am excited about playing with an all-female band because I’ve never done that before, and I’ve been playing for a long time.”

The other members of the core band are Danusia Beatz, Alex McArthur and Dara Gallagher.

Lougen and Beatz have a 10-year friendship and plenty of experience playing together, but it will be her first time performing with McArthur, who Lougen describes as a “genius jazz singer.”

Despite her knowledge of all of the other musicians in the show, it will be Lougen’s first performance with many of them.

“It’s always different when you get to play with them … It gets real when its face-to-face,” she says.

As for some of the songs that will be played, Lougen doesn’t want to give the whole lineup away, but shared that “This song list was chosen to span a whole lot of great, influential female artists and … each girl is singing what’s slightly more to their style, and each girl definitely has a different style.”

Each of these styles will have their chance to shine in the show, as the artists lend their voices to some of the most iconic female-led songs. And it just so happens that Buffalo is perhaps the perfect environment for an event like this.

Lougen acknowledges that her instrument is typically heavily male-dominated, but she feels that the Buffalo music scene has never been anything but accepting, and she’s looking forward to combining her talents with an incredible crew of other female musicians.

“Normally it’s just me and the rest are guys or maybe one girl singer, so it’ll be different. I mean, it’ll be great,” she said.

McLennan commends the distinctiveness of the show, saying “There are so many great songs written and performed by women, and it’s not difficult to see women sing around town. But to [be] backed up by an all-women band, we think this will be special.”

Girls Just Wanna Have Fun: A Tribute to Women in Music will be held at the Sportsmen’s Tavern Saturday, Feb. 5, at 8 p.m. Featured artists are Lougen, Beatz, McArthur and Dara Gallagher. Special guests are Amanda Markovich, Blaise Mercedes, Donna Delano-Kerr, Joelle Labert, Kate Starr and Jerry Hall. Tickets are $20 and can be purchased at the Sportsmen’s Tavern or sportsmenstavern.com. A portion of proceeds will be donated to the Breast Cancer Network of WNY. This is a 21+ event. Contact the Buffalo Music Coalition on Facebook with any questions about the event.