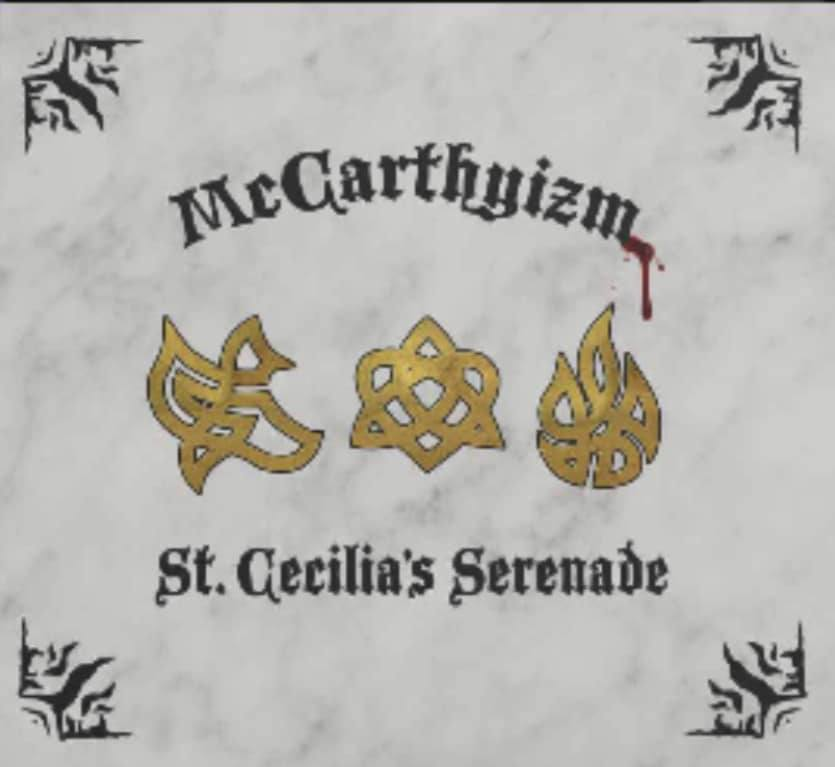 McCarthyizm released its new album, “St. Cecilia’s Serenade,” on June 2 at the Sportsmen’s Tavern! I’m going to tell you all about it, but first some background and memories. 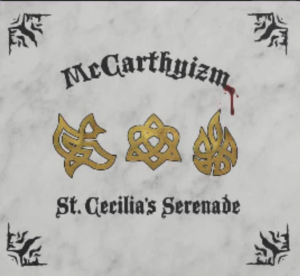 I can’t remember the first time I saw McCarthyizm, but once I did, they’ve always been one of my favorite bands. For a music fan for whom the Pogues are at the top of the heap, it was a thrill to see a Buffalo band doing Celtic/Irish music that incorporated some of the features of the Pogues: traditional sounds and instruments mixed in with kick-ass rock music. And they do excellent versions of the Pogues’ “If I Should Fall From Grace With God,” “Turkish Song of the Damned” and, sometimes inspired by seeing me in the audience, “Sally MacLennane.”

McCarthyizm has been around in one form or another since 1993. They’ve been regulars at Irish Fests, of course, but also at the Sportsmen’s Tavern and many other local venues. They’ve opened for the legendary Black 47 and many other national touring artists, and they’ve put out six albums of exciting, high-quality recordings, the most recent being “Pair O’ Docs” and “Victors and Vices,” both in 2011. They’ve played in many cities beyond Western New York and their live shows have become extraordinary. McCarthyizm was inducted into the Buffalo Music Hall of Fame in 2009.

However, it does the band a disservice to imply they are Celtic-only. This band can rock, with a powerhouse drummer, great rock ‘n’ roll lead guitar, a thundering bass and a tradition of remarkable fiddling. Their biggest musical influences have been the Who, the Beatles, the Rolling Stones, the Clancey Brothers, the Pogues, the Clash, REM, The Band, Bob Dylan and Steve Earle. A little bit of rock, punk, country, pop, folk and zydeco, all mixed together, Maximum Rock n Celt! And it’s all led by the voice and guitar and songwriting of the band’s namesake, Joe McCarthy.

But one of my favorite McCarthyizm memories is the time in the mid-2000s when they were just about to start on the big stage at Amherst’s Scottish Fest and most of the town lost power. McCarthyizm came down off the stage and sat in a circle and did a lengthy acoustic set for a highly enthusiastic, sing-along crowd. It was a brilliant performance by a band of talented, inspired professionals. 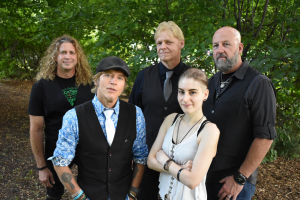 It’s been several years since McCarthyizm’s last collection of new songs. I knew they were working on the new album for a while and I was excited to get the chance to hear the new songs.

It turns out I’ve heard most of them a time or two lately, as they have been playing them as part of their live show, riveting versions with the newer members of McCarthyizm, Sally Schaefer and Joe Dzialek.

Recorded primarily at Sessions Studio in Black Rock by Jason Hall and produced by Paul Ceppaglia, the album sounds great right off the bat, opening with “Such is Life,” an ode to the challenge of appreciating everyday life, even when it’s a struggle. It’s a raucous, boisterous number and leads into “Black Rock City Nights,” a rockin’ tribute to the Sportsmen’s Tavern, especially when you really need a night out with some music.

After the first two, the tempo changes to include reggae, gypsy guitar sounds and even a little tin whistle, bagpipe and frottoir, or what I call a washboard. There are a couple of slower ballads; I especially like “These are Times,” the other side of the coin of “Such is Life,” this time a wistful appreciation of life for all the sublime quiet moments.

There are a couple of very creative, first-rate covers: “Colleen Malone,” a bluegrass song done by Hot Rize and Fiddler’s Green, popularized by the Dubliners and the Irish Rovers. “Borstal Boy,” a title taken from a 1958 novel by Brendan Behan, is a classic McCarthyizm Irish rebel song. “Devil On My Shoulder” is just what it sounds like, the devil on one side grappling with an angel on the other shoulder. The song “Light the Way” was originally entitled “Hell on the Highway,” but the great Steve Earle himself changed the name of the song. Ask Joe for the story next time you go out to see McCarthyizm.

Near the end is “Chasin’ the Setting Sun,” a terrific live song that I think sounds Grateful Deadish, with some really delightful Cajun accordion. The song just has a great groove and it expands the range of what you think you’re gonna hear from McCarthyizm. There’s even a little sample of “Tequila,” reminding me of the Earl of Bud! 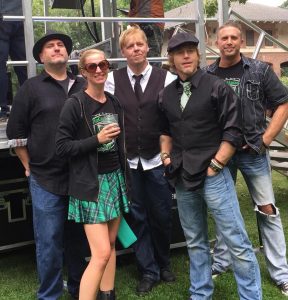 The line-up that made the new album, ‘St. Cecilia’s Serenade’

In addition to Joe McCarthy, Dave Mucha and Greg Czech, the album features Paul Ceppaglia on guitar and Helen Butler Ceppaglia on fiddle. There are several guests playing on the album, including Dwane Hall, Jim Whitford, Dee Adams, Jacob Brockway, Ron Kowalewski, Joe Bacon, Seamus Dalacroix, Nick Ceppaglia and Violet Ceppaglia. Other than the two covers I mentioned, all songs are written by McCarthyizm, lyrics by Joe McCarthy.

I highly recommend this album; great songs and incredible performances. Support the best of our musicians in Buffalo, and that certainly includes McCarthyizm.

You’ll be able to stream the album soon, but buy the CD and retro cassette with a USB drive and get the liner notes and all the lyrics, and keep artists like McCarthyizm in the business of presenting us with their musical vision.

And if you haven’t seen them play these killer songs live, what are you waiting for?! McCarthyizm will be playing Dwyer’s Irish Pub in North Tonawanda on July 17 at 4 p.m. and the Irishman Pub in Williamsville on July 21 at 6 p.m.