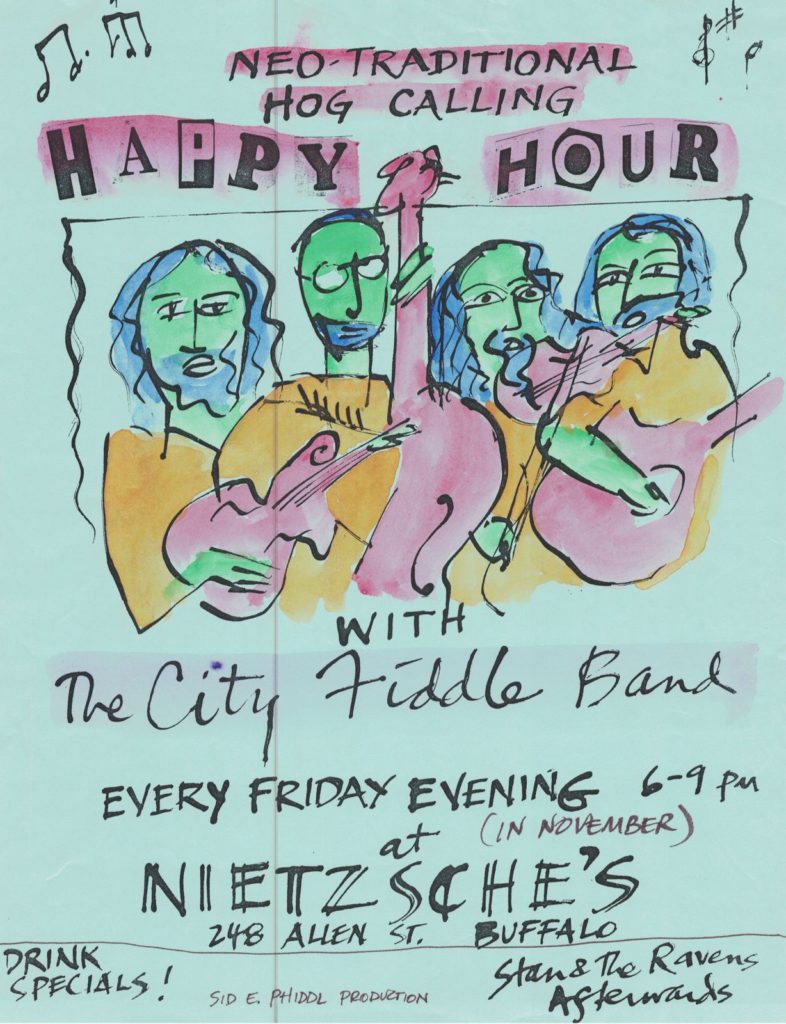 By Philip Banaszak February 16, 2019 No Comments

On Jan. 18, 2019, I went to Steve’s estate sale and bought a couple of small boxes with buttons and sewing-related items and, along with a few other items, a poster that Steve created many years ago.

I spent about an hour walking around the house looking at the numerous, remaining pieces of Steve’s material world that were up for sale: parts of concertinas and button boxes, guitars, drums and other assorted musical items, Robin Hood books, archery equipment, art supplies, stained glass making remnants and so much more. I stepped out into the yard and surveyed the state of the house, noting that it was in much worse shape now than the last time I visited him many years ago.

I met Steve around 1980, when he approached me, as I sat on my porch fiddling, saying that he knew some of the tunes that I was playing, adding that he also played the guitar. I urged him to bring his guitar and we could try to play together. I had just returned to playing the fiddle a couple of years earlier after an 11-year hiatus.

He did come with his guitar and we began exploring the tunes that we both knew. He shared some of the music that he found inspirational, turning me on to the likes of the Holy Modal Rounders, Kenny Hall and Kate Wolfe, and we began a friendship and musical relationship that would continue over the next 20 years or more. We performed music together across the Western New York region as Without Further Ado and or City Fiddle. We played open mics, parties, picnics, coffee houses, living history events and dances, civic functions, festivals, fiddle contests (including the Erie County Fair contest, which we won three years running, and a state championship in 1991), in the studio and in our homes.

Steve coined the phrase “Neo-Traditional Hog Calling Happy Hour,” which became a long-running show that we played every Friday night at Nietzsche’s in Allentown. We got to know each other’s families and he was always quick to help when help was needed.

When I started to write tunes, he would learn them and we would add them to our repertoire. He learned to play the guitar in most keys to minimize the use of a capo and he usually added a positive energy to the music we played. We were able to play for hours without repeating a tune and could jump from tune to tune, communicating our intentions with just a glance.

Steve’s creativity was rampant in other areas, as well. He created stained glass, marbled paper, pocket-sized notebooks (sewed and bound), and artwork in many forms (including band posters). And he made music. He was a multi-instrumentalist. He was fluent in guitar, concertina, mandolin and voice primarily, but he dabbled with all sorts of instruments.

He had skills as a carpenter, rebuilt button squeezeboxes and concertinas and he collected all kinds of ephemera, including his aforementioned Robin Hood library. He was one of the driving forces behind the accordionists gathering know as “Squeeze Out.”

Steve was a man of passion and conviction and he was reliable and available. We met when we were at similar stages of our development as musicians and we spent much of our musical time together. We also spent quite a bit of time together doing other things that held our interest. During the time I knew Steve, he went to school and became a registered nurse but he could not tolerate working in the hospital setting so he gave up a job at the VA Hospital.

Following the release of our “City Fiddle: 20 Neo-Traditional Fiddle Tunes” CD in 2002, we found ourselves in a difficult place, where Steve’s lifestyle decisions came in direct conflict with my vision of City Fiddle, which was to be playing music. He was angry with the circumstances that his lifestyle decisions delivered to him. His coping strategy could not improve his situation, and I was unwilling to tolerate it in a professional, musical setting. I issued an ultimatum but Steve decided to continue on his chosen path. We played our last gig together in 2003 and our interpersonal communication became rare indeed.

I visited him in the hospital once and he did not recognize me and I saw him at a party once and did not immediately recognize him. The nearly 25 years that I spent working as a CASAC (Credentialed Alcoholism And Substance Abuse Counselor) gave me no skill or tool to help Steve Pevo. On Nov. 16, I received calls from some friends and then from Steve’s brother, who confirmed that Steve had passed away. He was 65 years old. Rest in peace old friend!

There are some strange and dark ironical forces at work here, as the poster that I bought at the estate sale was one that Steve created for the late Michael Meldrum’s long-running Open Mic at Nietzsche’s, about an age ago. Steve pulled a photo, from an autopsy book, of a man’s chest cavity opened up, exposing his organs, and grafted an image of Mike Meldrum’s head onto it! It loudly exclaimed “Open Mike” and gives the details of the Monday event.

That poster will join the numerous other ones that are available on the Posters page in the History section of Cityfiddle.com. You can find more of Steve’s poster art and some additional information about him there as well.