A lot of water has gone under the bridge since Peter Haskell was a Raven.

But he was one of the first to play with Stan Szelest in the early days of Stan & the Ravens. He replaced Rebel Payne to become the second bassist for the Ravens. 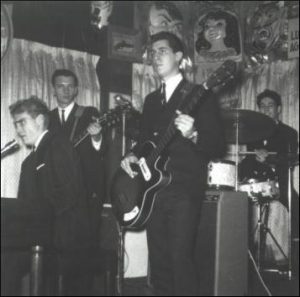 Haskell, an Elmira native, got out of the Navy and moved to Buffalo to go to UB. But he found music to be a full-time job, playing at places like Tom & Jerry’s (which he describes as “kind of a den of iniquity” on Washington Street behind the Courier Express newspaper … but the, he says, “they were all dens of iniquity; it’s just that T&J’s was my introduction to Buffalo saloons in the early ’60s and probably made a larger and lasting impression in that regard on me) and eventually Lulu Belle’s on Best Street.

At the time, Szelest was still just a 19-year-old, but he had returned from his first stint playing piano with Ronnie Hawkins & the Hawks. Szelest had left an impression on the Hawks’ Robbie Robertson, Levon Helm and especially Rick Danko, the future core of The Band.

Haskell replaced Payne (another Hawkins’ alum) and found himself playing with the Ravens at the Hideway, another East Side haunt.
In a recent interview, Haskell said the repertoire was blues — with a heavy emphasis on Ray Charles. 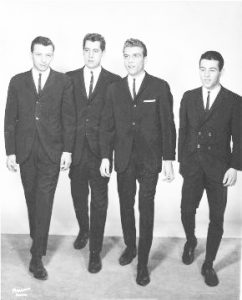 What he also did was play with a ferocious intensity. He was also demanding.

Also in the band was Chuck McCormick, a James Burton-styled guitarist.

Szelest had learned from his time with the Hawks. Like them, he required the Ravens to buy matching suits.

“He had us all buy black mohair suits to match his,” said Haskell.

He also turned up the volume.

In Buffalo, Helen Morton was the owner of a small corner bar on Delavan Avenue called The Hideaway,” Haskell said. “The building was darkly painted as I recall and had a long bar on the right as you entered. To the left was a sort of dining room with wooden booths running the entire length along the far left wall.

“The floors were wooden and the stage was elevated a foot and half or so and located in the dining room front window area. The front windows on both sides of the front entrance were rather large pieces of pane glass, probably Thermopane.

“From the street outside looking through the stage window we could see the backs of our Fender amps, Stan’s Wurlitzer electric piano and Sandy’s drums. From where I stood when I was on the stage Helen and her girlfriend tending bar on the other side were often hidden from view.

“Helen always insisted we cracked her huge front Thermopane picture window behind bandstand with our sheer volume. Stan always referred to us as the “Volume Kings.” Helen wasn’t too delighted with the volume we achieved, but that was always tempered by the noise of her cash register ringing. After we had been in her employ for a spell I remember she bought herself a brand new shiny midnight blue Buick Riviera.” 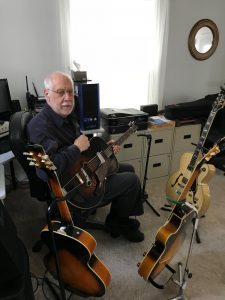 Haskell spent about a year with Stan & the Ravens before moving on to join the Jesters, at a that point a more high profile gig (and who had a history intertwined with the Rocking Rebels). He went on to play with more Buffalo bands, including Billy Quad & the Rockitts, Baby Huey & the Relatives (with the late Nick Salamone) and the Coincidentals.
He also gave guitar lessons, with a young Hamburg teenager named Peter Case being among his students.

Eventually he moved to the guitar and moved to Boston, Mass., eventually returning to Elmira, where he lives now. During the ‘70s, he played disco. He’s recorded jingles. He’s developed his sound as a jazz player.

All along the way, he made his living through music — and he still does. Today he mostly does solo shows with a sound system.

But songs like “Honky Tonk,” “Georgia on My Mind” and “Johnny B. Goode” are still in his repertoire. He can still rock it.

Note: Some of the information for this story was from Peter Haskell’s website (http://www.peterhaskell.net/peterhaskell), where you can find more of his stories and samples of some of his original music.

By Peter Case
(Courtesy of the writer)