Music at the Library

By Elmer Ploetz February 1, 2020 No Comments

We’re pretty excited about one of our newest initiatives. 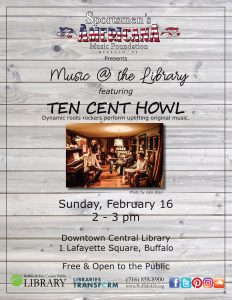 The Sportsmen’s Americana Music Foundation is partnering with the Buffalo & Erie County Public Library in a new initiative, and we’re pretty excited about it.

A new series of shows, “Music at the Library,” will be premiering at the downtown library, 1 Lafayette Square, on Sunday, Feb. 16, at 2 p.m. with a perormance by Ten Cent Howl. Admission, of course, is free.

The band will play a largely acoustic set in the library’s “Ring of Knowledge” space (near the escalators), with the library video recording the set to put on its online video and social media channels. The SAM Foundation also plans to stream the performance as it happens on Facebook Live.

Showcasing local musicians and orginal music is the focus of the new series, which is loosely modeled after National Public Radio’s “Tiny Desk Concert” programs. (If you want to check them out, here’s a link to one they did with Roseanne Cash last fall: https://youtu.be/F0Za2ZHmVNI).

The SAM Foundation and the B&ECPL will be offering several more free public performances this year.
The Steam Donkeys will be playing on March 29 and the following show will be on May 3 with performers to be announced. A ‘’New Musician Showcase’’ outdoors at the Downtown Library Reading Park is being planned for a date in June 2020.

One of the goals of this collaboration is to create an online archive of original music from Western New York musicians that can be shared via the library system’s resources.

Further down the road, the program is expected to move into other libraries around the county, spreading the good news of our region’s incredible talent base.

Here’s what outgoing SAMF President Bob McLennan had to say in the official announcement of the series:
‘’The Sportmen‘s Americana Music Foundation is dedicated to sharing Americana music and its makers with the Buffalo community but especially to giving kids access to music workshops and instruments that they otherwise might never have had.

“We are very excited about collaborating with the Library to introduce local music to the wider community through these new events, and there’s more to come.’’