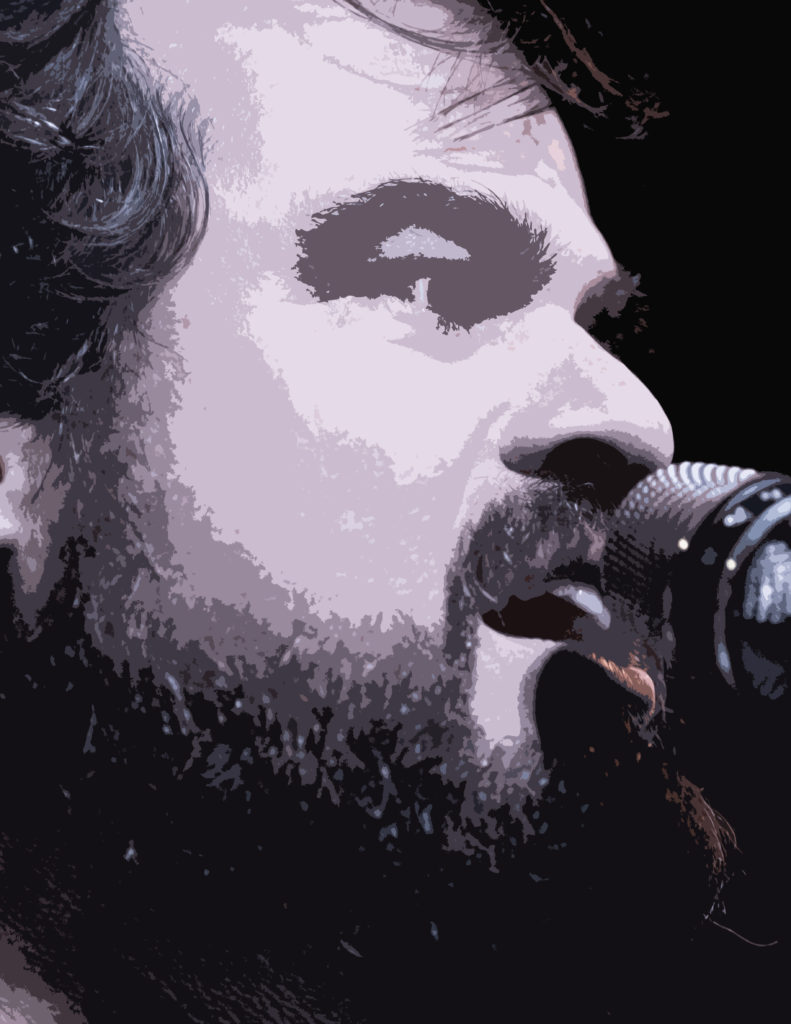 With this, the second of my monthly installments writing up something about folks on the local scene, I’m happy to present this profile of noted songwriter, 2015 SAM Foundation songwriter of the year, singer and leader of the band known as Leroy Townes: Beave Sorensen. —BQ

As many of you already know, Sorensen is a magnetic personality, on stage and off. How does a dude get to be like that? I asked Sorensen about some of his earliest memories playing music. He revealed his memories in this way…

“I learned to play music in church. My old man was a preacher and when I started plunking around on an old nylon string cardboard guitar at home, he tossed me a chord book and a hymnal. I started playing with him (he was a phenomenal piano player and singer) during service and I fell in love with some of the songwriters, especially Fanny Crosby—a blind woman in the 19th century who wrote thousands of gospel tunes. There’s this song that stands out to me: ‘Savior, savior, hear my humble cry/While on others thou art calling, do not pass me by.’ That’s the blues right there.”

I’m not too proud to admit that I had to Google Fanny Crosby to get what he was talking about, but then, yeah, I could see what he was saying. It’s joyous and spiritual. Just like going to hear the Leroy Townes Band, except not as relaxed and fun.

“My parents were very conservative and my father was a reformed hippy who had done time in California before I was born,” Sorensen continues. “We had to be surreptitious about secular music. My older brother introduced me to Ice-T and Shania Twain. I found an old record player in the basement with those cool spiral-cord headphones that make you look like a ham radio operator. I started riding my bike to garage sales and collecting vinyl. The first record that hit me like a ton of bricks was John Prine’s ‘Diamonds in the Rough,’ he recalls, “I was a lost cause after that.”

So me, I’m like, Ice-T? Shania Twain? John Prine? Fanny Crosby? I had to ask Sorensen if, having grown up in that environment, did he still draw distinctions between religious and secular music? It’s known to have been a major rub for some writers and performers. How different is the experience of playing in a church compared with playing in a bar?

“There is zero difference between a bar and a church,” Sorensen says. “Both are offering an illusion that we’re not alone, that there’s nobility in toil and suffering; brotherhood of man type stuff. When you’re playing music, you get to be a part of that magic trick and your job is to tap into that universal human experience. I think all music is inherently spiritual or sacramental in that way.”

What’s up with the Leroy Townes identity for the band, and why do you use it?

“Often times when I start writing, my intention is to have a story arc of songs. The song “The Hunting” on our last record, Little Bit of Light, is about the Greek goddess Diana and I wanted to have several songs that dealt with muses, but that was the one that stuck,” says Sorensen. “The closest I’ve come to pulling that off was on our second record, where the first two and last two songs on the record deal with Leroy Townes, a character that fits in that Sergio Leone fantasy of the West, something that’s always fascinated me,” he explains. “So I start writing from a place of fantasy, seeing a world in my head and writing about it and that’s where that character lives.”

It’s always interesting to me to find out when a songwriter began writing songs, and why. Sorensen recalls his start this way: “I started writing songs in high school and like I said before, I’m drawn into worlds that I’m reading about, voices and places that capture me. My first song was about Holden Caulfield from Catcher in the Rye. There’s a song on our new album about Qanah Parker, who I discovered in the book Empire of the Summer Moon. It’s a fascinating account of the Comanche tribe in Texas by S. C. Gwynne.”

Sorensen’s recent work has been crystalized during some recording sessions for an upcoming Leroy Townes release, which I’ll let him describe thusly…

“We went in last month to record a five-song EP at Temperamental Recordings in Geneseo. It’s a 200-year-old church converted into an amazing live space by Mike Brown, a man with a well of musical knowledge deeper than any I’ve met. Our drummer, Jeff Schaller, had recorded there last year with First Ward and told us we had to get there. He was right; we ended up recording 10 songs in two days and we’ll be releasing This Side Up in time for the summer. I already can’t wait to get back in this studio!”

Then, I asked the inevitable question about where art meets commerce: How does an independent band making beautiful music make the new songs available to the people? I found Sorensen’s response to be very realistic and genuine.

“I know very little about the business side of music,” he admits, “Pretty much all of the money we make goes back into the band: equipment, studio time, merchandise, GAS. I’ve been seeing a bunch of posts recently about the winter of Buffalo musician’s discontent. I see where they’re coming from to some extent, but I’ve just been playing the gigs I want to play. Mike DiSanto told me a few years ago about the power of “no.” It’s helped to take a lot of that anxiety away from seeing your calendar fill up with gigs you’d rather not play. In any case, we’ll be releasing a hard copy of this record because I still believe in the physical world. But of course we’ll have it on Spotify, Apple Music, Google and YouTube as well. All of our albums are online. One of the things I’m really excited about with this record is making some music videos to release on our YouTube channel. We’ve got three in the works and it’s such a fun and creative process, it’ll probably change the way I write songs!”

In the meantime, I urge you, if you have not, to see the Leroy Townes Band whenever you have the opportunity. It’ll feel like going to church, just not so early in the morning.