What would happen if you were to take two of the biggest party days in Buffalo — Mardi Gras and Dyngus Day — and combine them into one?

Well, Buffalo is about to find out what it looks like on stage on Feb. 26 as the Big Easy in Buffalo brings local zydeco legends LeeRon Zydeco and nationally known polka stars Buffalo Touch together on stage at the Sportsmen’s Tavern for Mardi Graski. It’s an afternoon show, running from 3 to 6 p.m.

It’s a concept that’s unique enough that if you google “Mardi Graski,” you’ll get only one page of results — and they all refer to this event.

But at the same time it just makes so much sense that it’s amazing nobody seems to have thought of it before.

“(Zydeco’s) actually happy music, like polka music. It’s a happy and partying and get you swinging this way. And it’s a fun music,” said Ken Machelski, one of the founding members of Buffalo Touch. “They’re both dance music and they get your feet moving and getting people grooving.”

And they both rely heavily on the accordion.

“I’m excited about doing this because it’s a sort of accordion-dominant gig,  ‘Revenge of the Accordions’ or ‘Blazing Accordions.’ It’s kind of fun,” said Ron Davis, aka LeeRon Zydeco.

Somewhere, someplace there are still people who think the accordion is uncool. They haven’t seen either one of these sets of performers.

The idea for the show came from the mind of Tod Kniazuk, the founder of The Big Easy in Buffalo.

“Awhile back we did a ‘cultural connections’ show at Canalside with Ten Cent Howl and the Brass Machine where they each did their own set, then did a third set together,” Kniazuk said. ” We used the line ‘What happens when an Americana band and a New Orleans style brass band play together?  We don’t know either, come find out.’

“The two bands have played together as ‘Ten Cent Brass Machine’ a few times since, and it turned out to be a really cool idea, so fast forward to The Big Easy in Buffalo adding more local shows to our season and we decided to bring back the idea of taking two different genres and putting them together.  We’ve had classical and jazz, rockabilly and Motown, and now we’re combining zydeco and polka.  We’re planning to do these ‘cultural connections’ shows quarterly, featuring local bands that are willing to give it a go and embrace the spirit of the idea.”

Kniazuk said he grew up in “a very Polish family, so polka music was always part of what I listened to.  It’s just fun music, but you have to be a good musician to pull it off well.  The Buffalo Touch is one of the best in the business – not just locally but anywhere, as their three Grammy nominations prove – and we’ve worked with them previously, so they were a first-call for this show.”

And The Big Easy in Buffalo had worked with LeeRon Zydeco before.

“It started by just wanting to work with LeeRon Zydeco again, but beyond that there are a few parallels,” Kniazuk said.  “Both genres are based around playing for dancers, they both feature waltz time in some of the music, and, of course, they’re both built around accordion. The Buffalo Touch even has a polka that brings in zydeco, so we have an idea that it’ll work. Ron and Ken from The Touch have played together before, and both were excited to collaborate with each other and The Big Easy in Buffalo. All that combined, and ‘Mardi Graski’ was born!”

At the Mardi Graski show, each will play a set of their own music. Then they’ll do a set together. It’s far enough away yet that they haven’t planned out the playlist as we write this, but the fit seems like a natural.

Buffalo Touch, which has been inducted into the International Polka Hall of Fame, has always had some New Orleans-linked music which it has worked into its sets around Mardi Gras, even recoring the Louisiana standard “Let the Good Times Roll.” In 2003, the Buffalo Touch (then led Jerry Darlak, who died in 2010) even played in the Mardi Gras homeland.

“We played down in Lafayette, Louisiana, and Baton Rouge,” said Machelski. “It was a great, great trip down there. I got to be a part of the Mardi Gras in New Orleans during the week, and it lasts a week long, you know.” 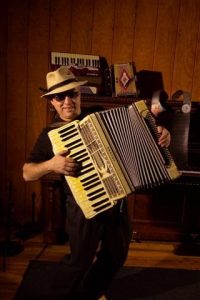 Meanwhile, the first instrument for Davis was the accordion. As a 7-year-old, he started taking lessons from Russ Messina on Main Street in Buffalo.

“He was a great accordion teacher and a great musician. And he actually played jazz accordion, and I always wanted to do that, but I was never good enough,” said Davis. “I was horrible student but I learned great technique from him. He drilled it into me about five or six years.”

Then came the Beatles and the British Invasion, and Davis found he could play professionally on keyboards for rock bands. But then 25 years later, he was introduced to zydeco — the Louisiana music that combined Cajun with blues and R&B.  Davis took to it immediately.

“I think I might have seen Buckwheat Zydeco at the (Lafayette) Tap Room,” Davis said. “That must have been about 30 years ago. And I got to talk to him and he was real nice guy. And I said, ‘Man, I could do that, you know, I could play that.’ I took to the music pretty quickly. And I got the band together.”

There was one catch, though. Davis was used to playing a piano-style accordion, while most zydeco players use a button model. But he adapted.

“When I was when I first started, I was so stupid. I didn’t know they were playing a button box. So I tried to emulate that on the regular accordion,” Davis said. “So thet contributed a lot to my style. “People would say, ‘How do you make it sound like a button box?’  I would try my best to make do with my left hand, I would try to emulate the buttons.”

Davis said the button accordion is different from the piano style also because it makes a different note when pushed together than when pulled apart, sort of like breathing in and out on a harmonica. With a piano-style accordion, you get the same note.

Davis performs as LeeRon Zydeco and the Hot Tamales, and over the past 30 years or so the Hot Tamales have been a rotating group of some of the region’s hottest blues players. At press time, he wasn’t sure who would be with him at the Mardi Graski show.

The Buffalo Touch has been performing since 1995. Machelski, who plays trumpet and accordion, was one of the original members. The original leader was Jerry Darlak, until he died of cancer in 2010. The current lineup also features Buffalo Music Hall of Famer Tadj Szymczak on bass, Steve Michaels on piano and guitar, Rick Pijanowski on drums and Jeff Osika on concertina.

Tickets are $10 and available through the Sportsmen’s Tavern. It’s a 21-and-up show.