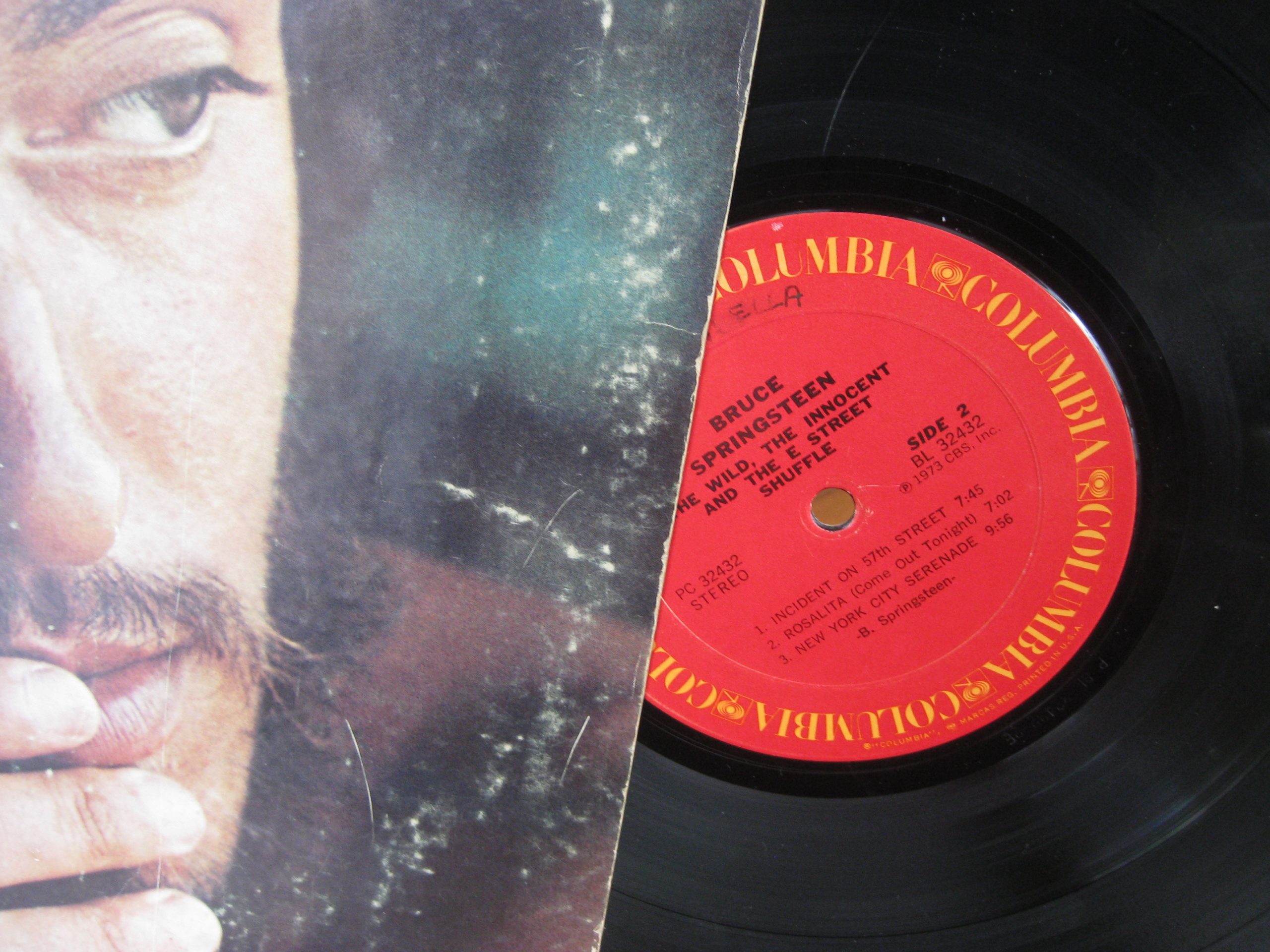 This piece on Bruce Springsteen’s “Rosalita (Come Out Tonight)” is written by James Kinsella, a writer from Massachusetts. Kinsella, a St. Bonaventure University alumnus and long-time Cape Cod-area journalist, is writing a book taking deep dives into some of the key songs of our times. We welcome the opportunity to present this piece on one of the Boss’ landmark songs.

“Rosalita (Come Out Tonight) by Bruce Springsteen, The Wild, The Innocent and the E Street Shuffle, 1973.

The jangling notes fly off the Telecaster in a wonderful cleansing moment, akin to the stately 12-string Rickenbacker that opens the Byrds’ “Mr. Tambourine Man,” but more insistent, more filled with promise …

Hold it – a Telecaster? Who the hell plays a Telecaster? This is 1973, and everyone knows that the cool guitar to play is the Fender Stratocaster, like on the back of Layla, the album that owned 1972 …

… And it got traded in in 1963 and had sat in the back of a guitar shop on the Jersey Shore ever since and then this Springsteen character comes along, he’s looking for a guitar and he sees this one and he asks the owner, how much, and the owner tells him, and it’s not all that much, and he buys it, and that’s the guitar that makes that jangly sound – 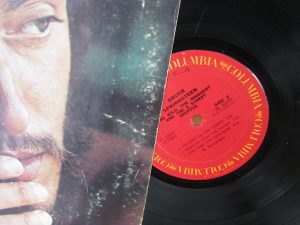 And now here comes Bruce Springsteen. On a mission.

Bruce is a young man. He’s crazy in love. He knows that her soft, sweet little’s girl tongue is the only lover he’s ever going to need.

Ah Rosie, you’re the one

The chorus comes charging in:

I’ve been listening to “Rosalita (Come Out Tonight)” for nearly 50 years. I know its vinyl location (kind of an early version of a Web URL) by heart: second track, second side, The Wild, The Innocent And The E Street Shuffle, Bruce Springsteen. That it was preceded by “Incident on 57th Street” and was followed by “New York City Serenade.”

I have seen Springsteen perform “Rosalita” in person three times: at Kleinham’s Music Hall in the middle of the legendary Blizzard of 1977 in Buffalo, N.Y.; at the Rochester War Memorial in Rochester, N.Y., in the summer of 1978; and at St. Bonaventure University, N.Y., in the autumn of 1978.

I wouldn’t say I’ve listened to “Rosalita (Come Out Tonight)” countless times, or anything like that. Probably only 3,742 times.

But only now – listening to the track over and over in the preparation for this essay – have I become conscious of what develops in the song structure of “Rosalita” from this point: something along the lines of Monty Python’s “And Now For Something Completely Different …”

I’m going to call them movements. (As Rod and the Faces would say, stay with me.)

First Movement: What we’ve been listening to so far in the performance: that jangly guitar opening, the setting up of the story, the slightly goofy urban milieu, Rosie’s parents living their workaday lives, the chorus urging Rosie to come out tonight. It gets your attention, but is fairly conventional.

Third Movement: The E Streeters suddenly slow to a mournful crawl, as Bruce acknowledges to Rosie that her mother doesn’t like him because he plays in a rock and roll band.

And he further confirms that her father doesn’t like him, but morosely observes that he never did understand. 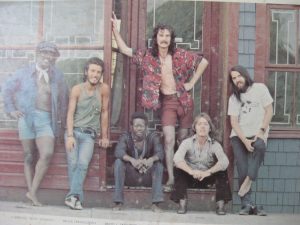 Your father lowered the boom, he locked you in his room

The band drops again to a whisper. Bruce declares that he’s coming to lend a hand.

I’m coming to liberate you, confiscate you,
I want to be your man

Then, throwing in some rueful humor:

At the moment, however, things seem pretty bad.

(BRUCE AND THE E STREETERS IN UNISON IN A SCHOOLYARD CHANT)

Well, tell him this is his last chance
To get his daughter in a fine romance
Because the RECORD COMPANY, Rosie
JUST GAVE ME A BIG ADVANCE

Fifth Movement: Triumph, right? Most songs pretty much would end it right there.

But this is Bruce Springsteen, so there’s going to be more to the story.

Bruce may be a gallant young knight, but he’s not Superman. His tires seem to have been slashed, and he almost crashed, but the Lord had mercy. Meanwhile his machine was all done and stuck in the mud somewhere in the swamps of Jersey.

He urges Rosie to hold on tight, stay up all night, because he’s coming on strong … by the time they meet the morning light, he will hold her in his arms

He knows a pretty little place, he tells her, in California down San Diego way … there’s a little café where they play guitars  all night and all day

You can hear them in the back room strummin’
So hold tight, baby, don’t you know daddy’s coming

Bruce and the E Streeters join in a long, rising “Whoaaaaaaaaa” that leads into…

Sixth Movement: …One final exuberant chorus, tying the song all together.

Seventh Movement: The band drops out and Bruce plays a classic stripped down 1-4-5 progression, one that you’ve never heard before though you’ve heard something like it in a hundred songs, with he and the band chanting over it in exuberance:

Final flourishes from Federici and Clemons, the track ending with Federici’s organ echoing off the studio walls.

In the early 1970s, a small number of rock fans had become aware of Springsteen as a pick by legendary Columbia Records talent scout John Hammond, who had discovered Bob Dylan.

There was the quirky first album, with its gaudy postcard cover art putting it right in the face of those would disparage New Jersey.

Then came the second album. “Rosalita” was the standout.

In concert, the song became the closer every night – the culmination of the joyous three hours of so that proceeded it.

In contrast to the conventional stoned robot approach then popular on stage with many rock bands, many of whom were becoming increasingly remote from their fans, Springsteen charged right in.

He leapt into the audience, singing while the fans gathered round him. He told long, meandering stories long before our current cultural fascination with all things story-telling.

The stories would end hard and true, kicking into the first line of a Springsteen song.

It was … on its way to being Shakespearean.

And “Rosalita,” I now realize, best makes sense in that light.

Shakespeare has some good lines when you read him on the page, but there’s an awful lot of stuff in there Olde English and you’re not always sure what he’s talking about.

See Shakespeare performed by a good company, though, and the art is transformed. The lines snap and low, even the most esoteric usage makes sense, and you feel daunting import from what, in one sense, are just three or four actors on a stage speaking words written 400 years ago.

As good as “Rosalita” is on record – and I know that I’m writing these essays about particular recordings rather than various live performances – to REALLY see “Rosalita” revealed is see Bruce and the E Streeters do it live.

Now, in fairness to the recording, it’s great – certainly great in my eyes. That’s why it’s in this collection. It’s so great that the recording can stand the missing-in-action status of its ostensible drummer, Vini (Mad Dog) Lopez. It doesn’t even need a drummer.

At this writing, in February of 2021, there’s a video on You Tube showing Bruce and the guys ending a show in Phoenix in 1978. Watching that video, the song’s dramatic structure makes sense.

“Rosalita,” in effect, is a seven-minute play.

The abrupt stops and starts, the asides to the audience, the over-the-top exuberance that literally has women throwing themselves at the sweaty, sexy, 29-year-old Bruce Springsteen, himself a bundle of passion – the song comes together as a seamless, unstoppable whole.

“Rosalita” – done at breakneck speed – always clocked in at seven to eight minutes. But, like the best performances, it felt a lot longer than that.

When you saw him live, by the end of “Rosalita,” Bruce was exhausted. You were exhausted.

But you, and he, were happy.

And that brings us back to the addled robots on other rock stages – and why “Rosalita” is so important in rock history.

Rock and roll is dance music.

That’s where its energy – Chuck Berry, Little Richard, Elvis Presley – came from. Early rock also was dance music: “She Loves You.” “You Really Got Me.” “96 Tears.”

But as the Beatles grew more sophisticated, and the Stones and other groups tried to follow suit, rock itself began morphing into something you would listen to patiently rather than dance your head off to.

In many ways, rock was getting tired.

And that’s why the jangling opening notes of “Rosalita,” followed by its funny story of underdog romantic triumph, hit so hard for those who were listening in 1973.

Rock was alive again. We were, too.