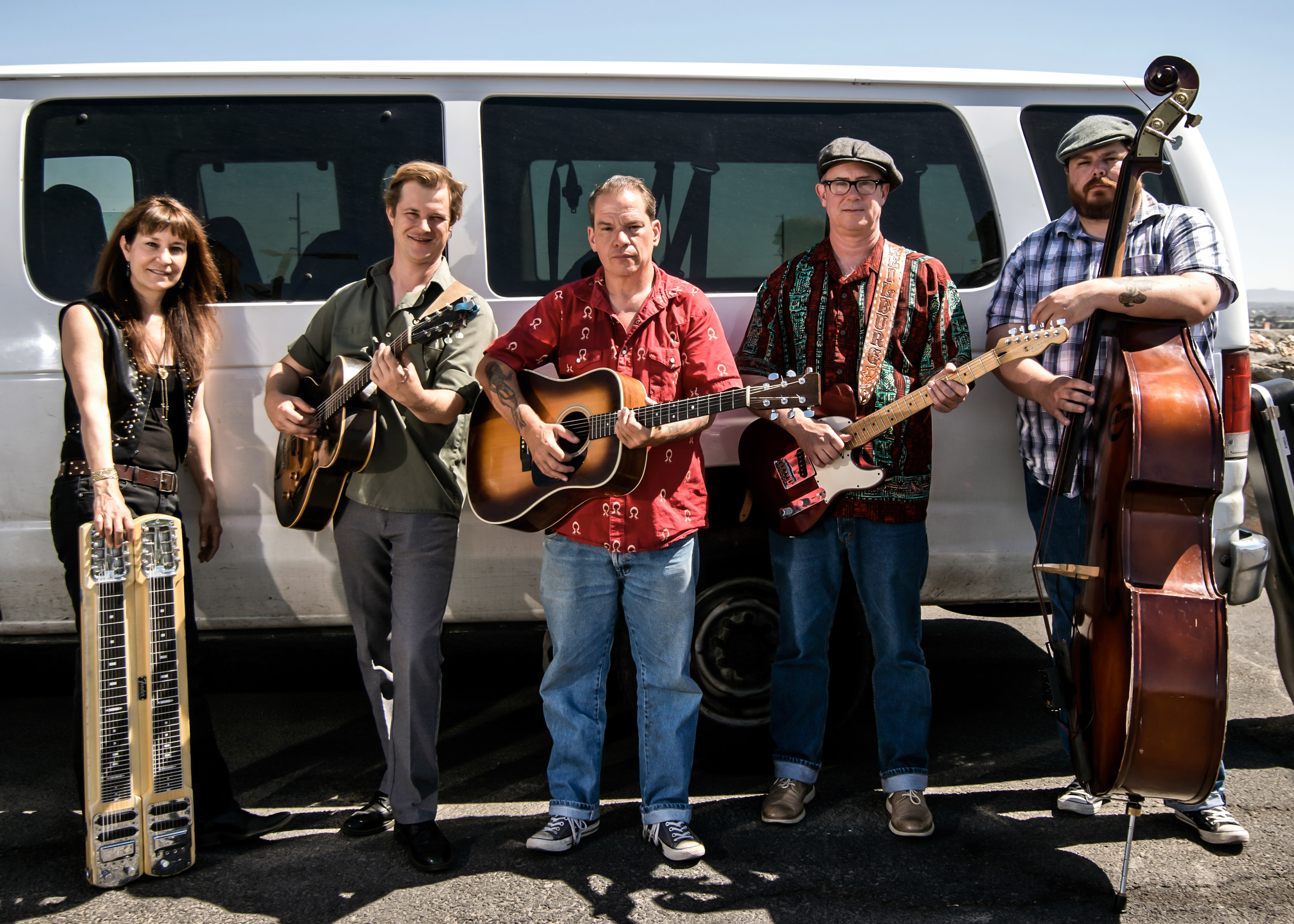 (Courtney S. Lennon is a Buffalo-based writer whose specialty is Texas singer-songwriters. So when Wayne “The Train” Hancock came to town, we asked her to write about the show — and Hancock himself)

It’s 5:30 on a mid-June Tuesday outside the Sportsmen’s Tavern. Dallas, Texas, native and songwriting great Wayne Hancock pulls up in his beat-down white van, with black and white Texas license plates and some road stickers on the back left, by the window, one saying, “Route 66,” a song he covers nearly every night. 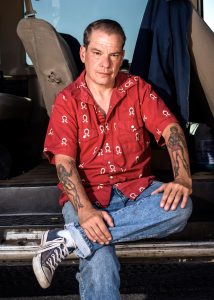 The inside of the van is uncomfortable, with seats straight up like a bus, no leg room, garbage all around, the tan fabric tattered, torn, stained and permeated by the smell of weed. Hancock is sober two years and stoned nearly all the time.

Hancock is open and honest about his struggles with booze over the years. As he oft does on stage, this evening he makes self-deprecating jokes, and talks about last year’s stint in jail following a DWI. It’s not the first time it’s happened. He’s been in and out of jail over the years. Eight times. “Could be nine,” he says. He’s seemingly lost count.
Hancock appropriately follows his remarks, going into a song about his role as designated driver at just 30 years old, “Double A Daddy” from his 1995 landmark debut album, “Thunderstorms and Neon Signs.” “We’re going out drinking, gonna go driving around / I’m gonna do the driving so you won’t have to go downtown,” he sings.

Earlier that day, Hancock threw his back out. Combined with bursitis in the hip from driving all the time, he’s had major health issues since getting into a motorcycle accident back in April of 2014. The neck bearings on his bike popped out at 85 mph. He took the bike into the bar ditch (that’s what Texans call the gravel berm), flying high up, going off the road rather than risking the life of his “brother” who was riding alongside him. It’s a miracle he survived.

“I broke eight ribs, fractured four more, cracked my sternum, and [wound up with] internal damage,” he says. “I punctured my left lung. My lung never fully inflated, so I don’t have as much air as I used to.”

Hancock’s on stage at soundcheck, and struggling in pain as his band, a group of master musicians, tune their instruments. There’s bass player Harvey Crowder, guitar player Bart Weilburg, and steel player Rose Sinclair, who’s on her last tour as a member of the band, embarking on other musical ventures back home in Austin, Texas. 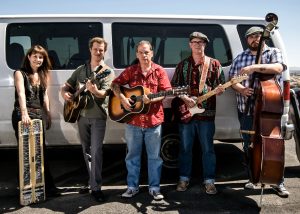 The band. Photo by Victor_Barajas.

I first spoke to Hancock back in July of last year, for a book I’m writing, “Live Forever: The Songwriting Legacy of Billy Joe Shaver” (Texas A&M University Press), an oral history outlining the life and songs of progressive country champion, outlaw and “Honky Tonk Heroes” (Waylon Jennings) scribe Billy Joe Shaver. In the months following, I’ve written about and interviewed Hancock extensively on his life and songs. So, knowing him, I throw out a quip.
“Hey Wayne, how many strings are you gonna to break tonight?”

“Hopefully none,” he responds.

Hancock almost always breaks a string, a casualty of his signature style. “It’s crazy, the way he plays his guitar,” explains Austin-based acoustic blues punk rocker Scott H. Biram. “He’s rhythm guitar. He’s playing jazz chords, but he’s slamming the shit out of the strings. He’s got tape around his fingertips and is just banging it out. It’s crazy.”
On his most recent album, 2016’s “Slingin’ Rhythm,” Hancock’s song “Two String Boogie” is about his common ordeal, and followed by “Over Easy,” the 2:24 instrumental his band plays while he fixes his Martin.

“Wayne, that’s impossible,” I continue. “When I saw you in Memphis [earlier this year at the Ameripolitan Awards], you broke two. The A and D. [Before the show], you said 30 minutes wasn’t a long enough set. Usually you play three hours, yet, you spent half the show fixing your strings. Band played ‘Over Easy’ ten times,” I kid.

“It doesn’t take me that long,” he says. “Hey Bart,” he calls out, “how long does it take for me to change my strings?”
“About six minutes,” he says. 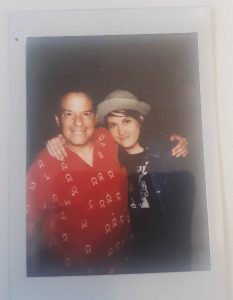 Polaroid of Wayne Hancock and the author in Buffalo.

Hancock is a bit rough around the edges, a badass in tropical shirts, with slicked back hair, not looking like your typical Texas troubadour, but defiant, authentic and unlike anyone else. At only fifty-four, his body of work is so prolific, he’s in a league with the elite group of the Texas legends Ray Wylie Hubbard (“Snake Farm”) refers to as, “The Holy Trinity” — those who one aspires to match as a Texas songwriter: Townes Van Zandt (“Pancho and Lefty”), Billy Joe Shaver, and Guy Clark (“Desperados Waiting for a Train”).

Hancock is far from the singer-songwriter norm. He invented a sound not heard before in music, a combination of Texas swing, honky tonk, jazz and rockabilly that reminds of Carl Perkins. That evening, as usual, he covers the Perkins-penned tune “Blue Suede Shoes.” He’s not playing the Elvis version. No reverb in the mic. It’s straight up old school rockabilly of the singer-songwriter variety. Bringing a bit of ’50s Memphis to the Lone Star State.

Try putting Hancock in a box. Impossible. Ever since he recorded “Juke Joint Jumping” on Thunderstorms and Neon Signs, he’s been known as The King of Juke Joint Swing. He’s unique, and himself. In fact, he’s his own genre.
“Wayne was brilliant out of the gate,” says honky tonk icon and Ameripolitan founder Dale Watson. “When I first heard him, it was hard to tell which songs were his, or which ones were old Hank songs I’d never heard at the time. He has a heavy influence from Hank Williams, Jimmie Rodgers, and Ernest Tubb, but his music doesn’t sound like any of theirs. He’s got his own thing.” 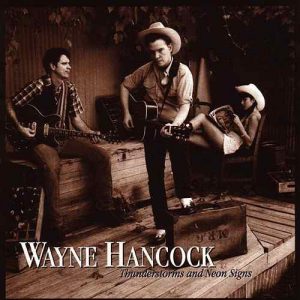 The album, ‘Thunderstorms and Neon Signs’

Hancock wrote the song at 23, depressed, drinking, in his trailer, out in the country, and hearing a lonesome whistle as a train went by. The song is dark, but Hancock takes the Bob Wills (“New San Antonio Rose”) approach, playing an upbeat melody, no matter how dark the content.

Just about a quarter of the way through the gig, Hancock plays his seminal song, “Thunderstorms and Neon Signs,” one that is in competition as the best written. Hancock is literary and stands out for his graphic sense that draws comparison to authors Jack Kerouac and Charles Bukowski, with vocals sounding like an innocent hillbilly, and the soul of Luke the Drifter. The song is about his early life on the road, moving from town to town and living in motels with his parents. Hancock always refers to the rooms with the memory of just a radio and T.V.

“I wrote ‘Thunderstorms and Neon Signs’ shortly after I moved to Austin, Texas, in 1990,” he says of the masterpiece. “I was 25 years old, sleeping on my friend [drummer] T.J. McFarland’s couch. There was a big storm moving in. I went outside to see it. There was no way to see any lightning. Just city lights. I went inside and wrote the song. It just came to me. Sometimes songs fall out of heaven. Like they’re already written. I get it down with words. It’s a feeling, emotion. I can’t really explain it. Because I don’t understand it myself.”

Twenty-four years after the release, the song remains autobiography. He’s living in motels, out there “Slingin’ Rhythm,” 15 hours a week to pay his bills and rent, so the lyrics go. Hancock makes the trek up North about once a year. “I’ve been coming [to Buffalo] since 1890,” he jokes.

Seeing him play is an essential stop on the roadmap of American music, so catch The Train next time he’s in town. Not to be missed.