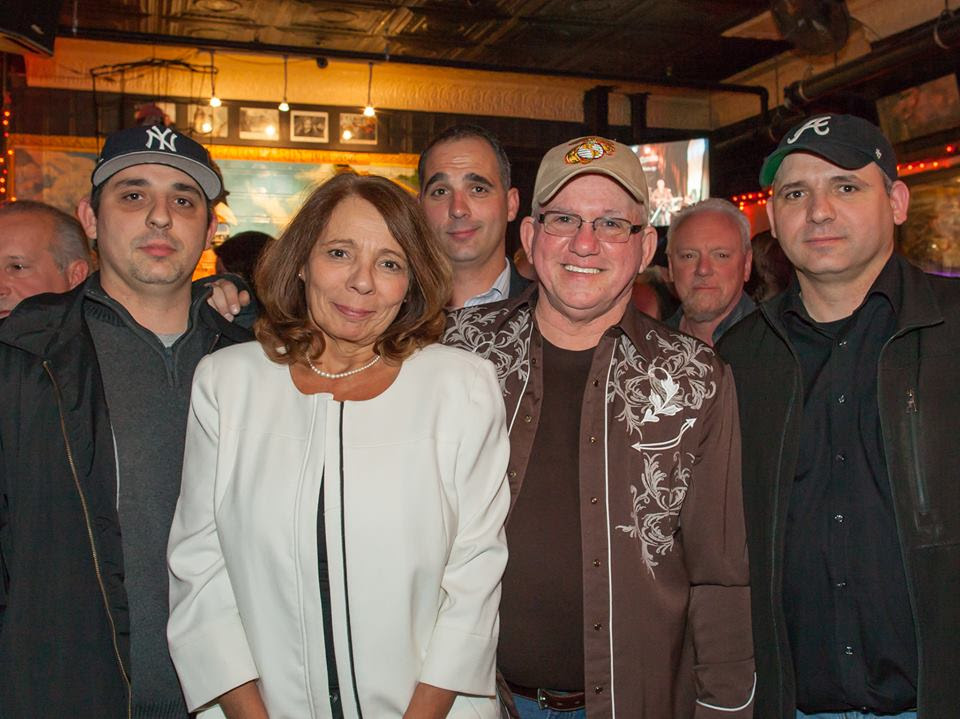 BIG THANKS TO 2 NEW CORPORATE SPONSORS!!

THANK YOU IAN WELLSBY OF VAPE E’S, LTD AND SEAMUS GALLIVAN OF THE RECONNECTOR

Read below for our monthly ticket giveaways, updates on our education programs, new music to listen to, a review on Ray Scott, who performed at the Sportsmen’s Tavern, and a closing statement on our annual Membership Drive, Beer & Chocolate. Save the date for our next event: Szelest Fest at Sportsmen’s Tavern, honoring the great Stan Szelest, presented by SAMF, on March 11 at 3 pm.

No doubt, the Hall family deserves this award for their their tireless efforts to bring the best Americana Music to the Tavern. Read what the Buffalo News has to say:

Your community is so happy for you and we’re very proud! Your Sportsmen’s Americana Music Foundation is working toward growing and creating all the time. Our Chairman of the Board, Dwane Hall has stepped down as Chairman to let his son, Jason Hall, step up as Chairman of the Board of SAMF. Dwane will always be “on board” with us as our consultant, as the foundation has been his creation. We thank him for his wisdom and guidance.

Jason Hall has filled his shoes and has hit the ground running already for us. We welcome him and are looking forward to growing as a Foundation.

Formal letters from both Dwane and Jason will follow in another email.

WELCOME, JASON HALL, AS SPORTSMEN’S AMERICANA MUSIC FOUNDATION’S NEW CHAIRMAN OF THE BOARD! Fill your life with music; your troubles will fall away and winter will breeze by. This winter is a long one beginning in December this year. We’re so lucky to have a plethora of live music venues hosting the best of the best locally and nationally.

SAMF hosted a party this past Monday evening to give thanks to our members. We appreciate your commitment to help us fulfill our mission. And it was a blast! Thanks to the Kensingtons who were outstanding and fit the bill perfectly. 17 New Members signed up and 23 Members renewed their membership. Woo Hoo!

And thanks to all of our volunteer members who made it possible:

Below you can see many of our volunteers and all the fun we had!! Photos by Peter Sloane.

Big Thanks to everyone!

One of the key goals of the Foundation is to promote and expand awareness, appreciation and even passion for Americana music. Getting instruments into the hands and great music into the ears of kids throughout Western New York will help insure that the flame continues to glow.

New programs and partnerships are the highlight of our educational activities at the start of the new year! Your SAM Foundation has gotten off to a strong start in 2018 with educational activities. Within the next couple of weeks we will have five multi-session workshops up and running at a number of the terrific community resources such as, The Valley Community Center, The International Preparatory School, The Boys and Girls Club of Holland NY and our newest partner, the Boys and Girls Club of Buffalo.

Mark Panfil got our Americana Music Appreciation Workshop off to a great start at our newest partner, The Buffalo Boys and Girls Club (South Buffalo Charter School Chapter) beginin Wednesday, February 7th. Mark introduced the kids to Americana music, the guitar and banjo, and had the kids singing, “This land is your Land”. In future sessions, Mark will not only continue teaching song, but will be providing guitar lessons as well.

Moving into its third week, Doug Yeoman’s Ukulele club at the Holland Boys and Girls club is going great! The kids are learning chords, working on some tunes and are planning to wrap up the program with a recital toward the end of the school year. This is the first time we’ve done a ukulele workshop but I suspect it will not be the last. Ukuleles have always been popular but they’re now hotter than ever and for good reason: They’re inexpensive, easy to handle, easy to play and most importantly they’re just fun! Who can be in a bad mood when playing a ukulele?! In addition to adding a partner and starting lessons on a new instrument, the Foundation’s educational team in engaged in a new initiative. Headed up by Bestself Behavioral Health, Helen Butler and Mark Panfil and The Sportsmens Americana Music Foundation will be part of a community outreach initiative kicking off Saturday, February 10th, held at the International Preparatory School. Family members and friends from the community are invited to the school to check out and take workshops in various disciplines including computer science and technology, arts, crafts and of course, music. Over a dozen vendors, including SAMF, will be on hand interacting with community residents, offering lessons/workshops in the vendors respective area of expertise. In addition to this Saturday’s session, there will be seven additional sessions, two per month starting in March, April, May and a final session in June. We’ll keep you posted on how this program progresses!

Along with the new programs and partners, The Foundation continues with the popular Americana Music Appreciation workshop at the Valley Community Center and the Rock ‘n Roll workshop at the International Preparatory School both for the fourth time!

All this is made possible by our community of members, sponsors and the tireless efforts of the Board of SAMF.

This month there are nine chances at six different venues for SAM Foundation members to win free tickets to see great live music in WNY. Email me at rjmcl14@gmail.com by Monday February 26th at 11 PM and let me know which drawings you’d like to enter. If you don’t know some of these bands, look them up and take advantage of this opportunity.

There are many different music venues in the Buffalo area, including 7 days per week at The Sportsmen’s Tavern, the other venues listed above and many more. Watch the SAM Foundation Facebook page for more information.

Get out there and support live music in Buffalo/WNY!

A Review of Ray Scott

I’ve never been a fan of “newer” country. Ya know, “country” that’s really just a pop song that as long as it has a banjo in it it’s considered country? It has lost its grit, authenticity and storytelling talent that the outlaws like Waylon, Willie and Johnny Cash showed off so effortlessly.

So when I heard that I was going to be covering Ray Scott, a contemporary country artist, I was a little worried. He played at the Sportsmen’s Tavern on the evening of Wednesday, January 31st.

Walking in, I was greeted by a half packed house of young country fans looking like they were coming to the after party of a rodeo. Being distracted by the amount of ten gallon hats that I saw, I almost crashed into a tall, dark and handsome cowboy that had a look of concern on his face when coming down the stairs. I shrugged it off and took my place at the upstairs bar waiting for Scott to grace the stage. When he finally did, I saw that it was the tall, dark and handsome cowboy I bumped into on my way in.

With acoustic guitar in hand, Scott was joined by another guitar player on stage and Scott gave a warm hello to the crowd of fans. His voice was low and warm with a rich timbre, a voice women dream of and men envy, and it gave his music a classic country tone.

Now when I say classic, I mean Outlaw classic. It was no hidden fact that Scott was influenced by the greats. He had the unapologetic personality, raunchy humor and writing talent that any of the Outlaws would’ve tipped their hat at.

However, the major downfall of the show was the fact that Scott played an acoustic only show with no backing band.

“I’m an independent artist, and it makes more economical sense for me to tour without a band,” he stated in a brief after show interview.

Although it’s understandably economically sensible, Scott’s brilliant lyricism and humor was lost on the crowd. After about five songs in, the mob of people upstairs started to become distracted and talked amongst themselves instead.

To be honest, I don’t blame them.

When an independent or lesser known artist comes through with just an acoustic show, it can become lost on people because they don’t feel the excitement and entertainment a full band brings, especially if the whole show is comprised of originals.

It wasn’t just Scott who lost out on that fact, it was the crowd too. While people were talking, they lost out on some of the best lyricism any contemporary country artists can offer today. Scott’s songs like, “Drinkin’ Beer”, a love song dedicated to the alcoholic beverage best served cold and in the summer sun, or “My Kind of Music”, an unapologetic anthem justifying kicking a hot babe to the curb if she doesn’t like the country classics (which personally, I absolutely agree).

Although he only came with an acoustic show, each of Scott’s songs were an absolute treat and so entertaining to hear. If you happen to catch him come through Buffalo again, really give him a chance. Hopefully, he comes with a band, because it’ll make you love him even more.

from The Americana Music Association: http://americanamusic.org/new-music SAM REIDER
TOO HOT TO SLEEP THE WOOD BROTHERS
ONE DROP OF TRUTH SUNNY WAR
WITH THE SUN MIKE AND THE MOONPIES
STEAK NIGHT AT THE PRAIRIE ROSE