Welcome to the December 2015 edition of the SAMF Members’ Newsletter and we hope the best for all of you in this Holiday Season.

Our usual ticket give away is in the Buffalo Bob article, so be sure to take advantage of it.

Don Nelson, our SAMF’s Vice President and Education Director, has us involved in a great program for kids to learn violin.

We are showcasing one of our Corporate Sponsors once a month and this month we have the pleasure of highlighting Korona Jewelers.

Scroll down to check out these articles.

The performance of the Bills in Philadelphia is just one more reason to focus on music instead of football. Here are a few of my thoughts:

BILL KIRCHEN HONKY TONK HOLIDAY PARTY: Nothing will get you into the Christmas spirit like the annual Bill Kirchen holiday party at The Sportsmen’s Tavern on Saturday, December 19th at 9 PM. I know it’s only a couple days after you will be receiving this newsletter, but make a snap decision and be there. It’s festive, it’s jovial, and you’ll have a great time. 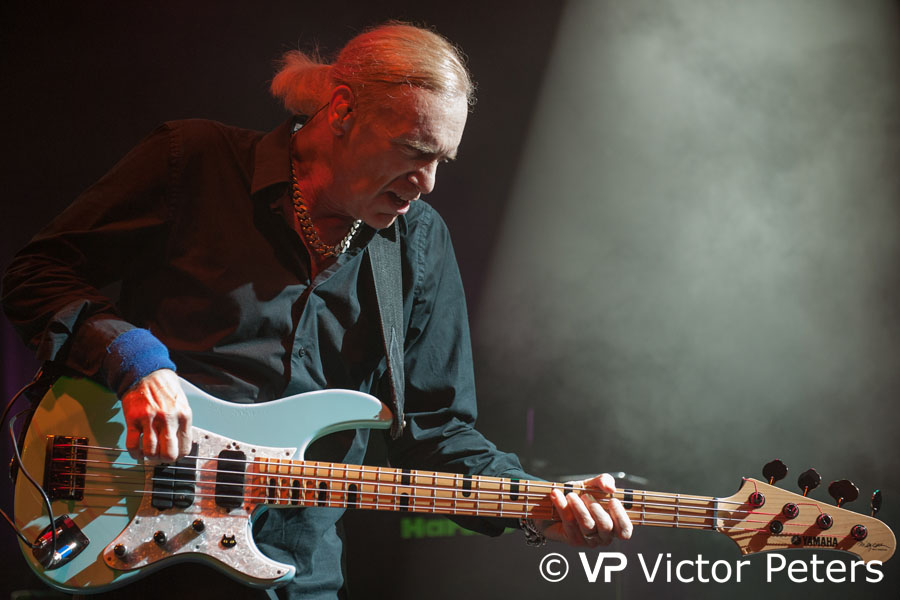 MORE HOLIDAY FUN: After seeing Bill Kirchen on December 19th, I hope you have a ticket for the SOLD OUT 1st Annual Buffalo Musicians Christmas Party hosted by Billy Sheehan and Bobby Lebel on Wednesday, the 23rd of December. This will include members of Talas, The Road, Weekend and JJ Swing. If you don’t have a ticket, I’m not just trying to rub it in, we need to give a big acknowledgement and thanks to all involved in the show. ALL proceeds from the evening will be going to The Sportsmen’s Americana Music Foundation.

MEMBERSHIP DATA: For a variety of reasons, we need to complete our data on each of our members. We’re missing mailing addresses, phone numbers and even some emails. Please take a couple minutes and send us those three items ASAP. Send to samusicfoundation@gmail.com

DELTA MOON: Delta Moon put on another great show at The Sportsmen’s on November 13th so it was great to see that DOWNBEAT magazine named their new album “Low Down” one of the best albums of 2015. A lot of you have not taken advantage of the opportunity to see them; watch for them to come back. Tom Gray, lead singer, and one of the two guitar players, used to be in a band called The Brains and I saw them open for The Motels in 1983 at Uncle Sam’s on Walden Ave in Cheektowaga. He wrote “Money Changes Everything” which was hit for Cyndi Lauper. They have several albums out with a great dual guitar attack, which includes Mark Johnson. Frahner Joseph and Marion Patton are also in the band.

GIVE FOR GREATNESS: On December 1st, the Give for Greatness Foundation, through the Arts Services Initiative, announced they are giving thirty $1000 grants to various arts and music organizations in Western New York, and the SAMF is one of them. It’s very exciting news that what we are doing on the music scene in Buffalo and WNY is starting to be recognized and appreciated by the arts community. The Give for Greatness Foundation is administered by the Arts Services Institute of WNY.

READING RECOMMENDATIONS:  Dave Alvin, the great songwriter, singer, guitarist, Sportsmen’s Tavern alumni and member of The Blasters with his brother Phil, recently recommended a couple books that may be of interest to SAMF music fans.  He put the recommendations on his Facebook page. “The Death of Johnny Ace” by Steve Bergman and “Los Lobos: Dream in Blue” by Chris Morris.  I haven’t read them yet, but I plan to.  I know they’re both available on Amazon.  Dave Alvin and The Guilty Ones have done Johnny Ace is Dead at The Sportsmen’s.  It’s a great rockin’ song about the 1950’s R&B singer who may have played Russian roulette one too many times. 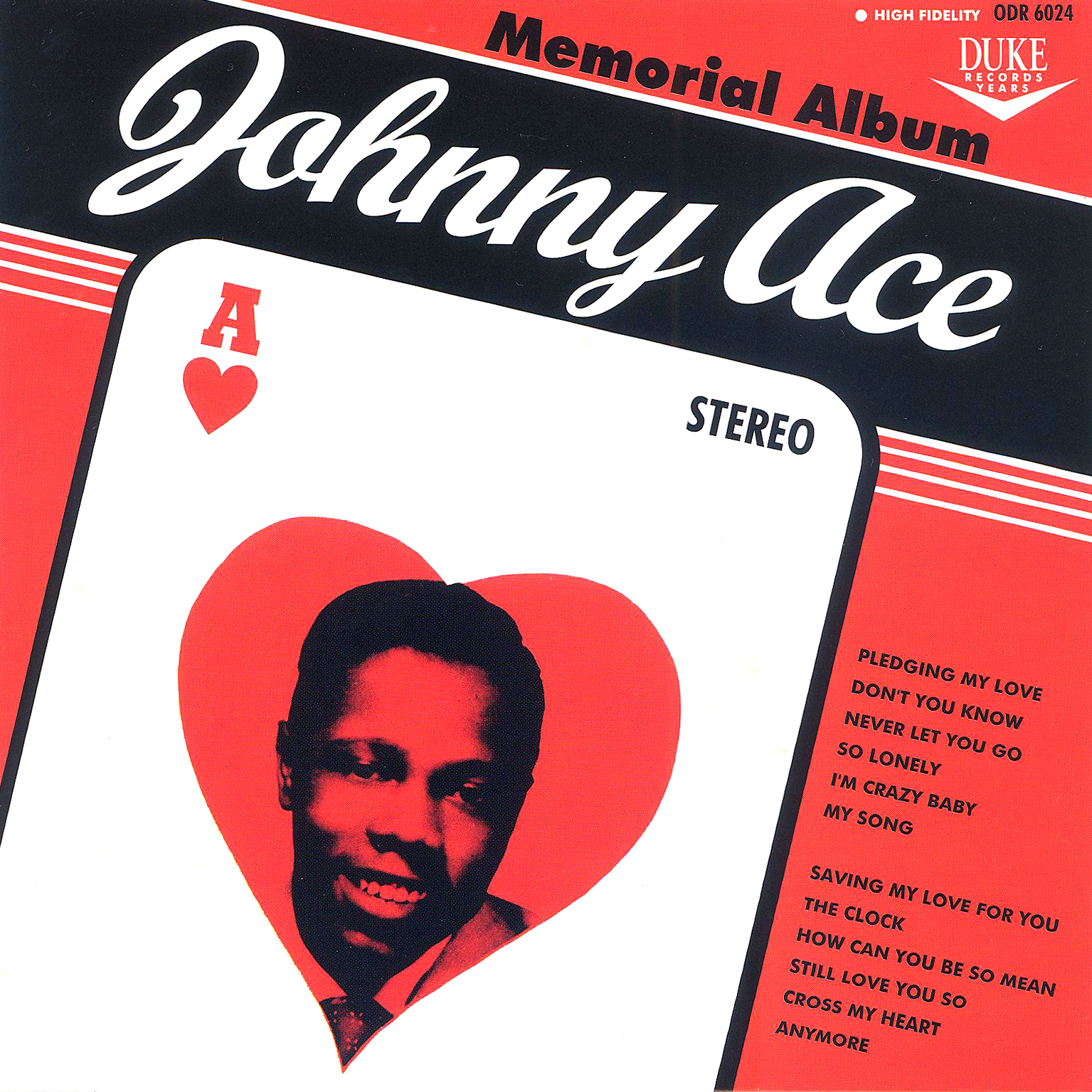 Also, last week I heard an interview with Tom Jones on the NPR podcast, On Point with Tom Ashbrook that was really interesting and funny when he was telling stories about his friend, Elvis Presley.  He has a new book out as well, “Over the Top and Back: The Autobiography” by Sir Tom Jones.  I bought a Tom Jones album a couple years ago, “Spirit in the Room” that was released in 2013.  Whatever you think about Tom Jones in the past, this is a great bluesy, soulful, rockabilly album full of great songs, including a cover of Tom Waits’ “Bad as Me.”

One more, this time close to home.  Michael Farrell is from Buffalo and a writer for The Buffalo News.  He’s done some very good reviews and advance press for shows at The Sportsmen’s Tavern and the SAMF.  He just had a novel released, “When the Lights Go Out” that’s set in the rock music scene in Buffalo.  While this is also available in Amazon, I’m pretty certain you can get it at Buffalo bookstores, as well.
FREE TICKETS:  Last month, John DiCillo won for the Steve Earle Tribute, Lorraine Gaik for The Black Lillies and Craig Touma for The above-mentioned Bill Kirchen Holiday show, all at The Sportsmen’s Tavern. 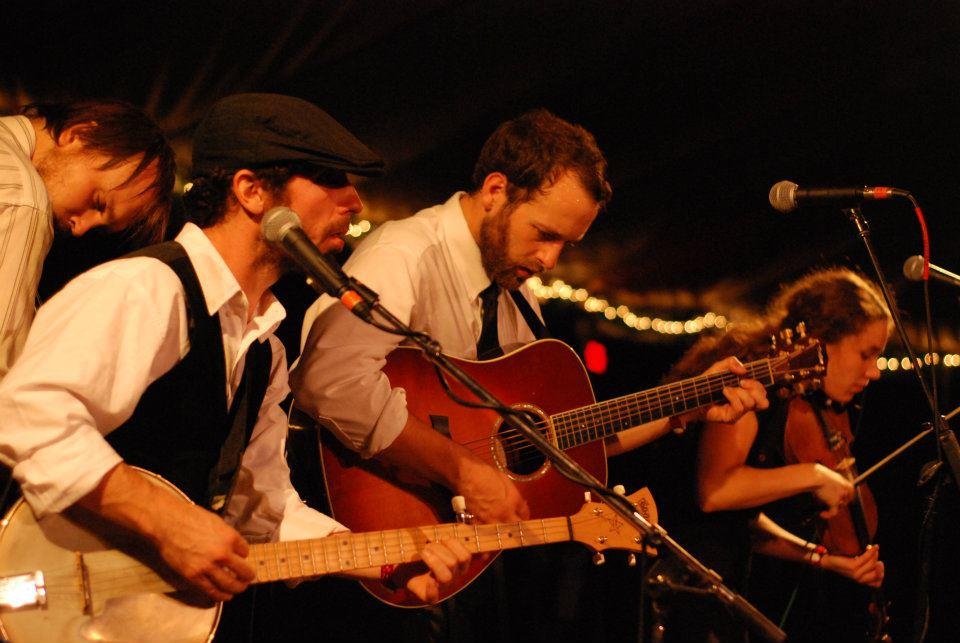 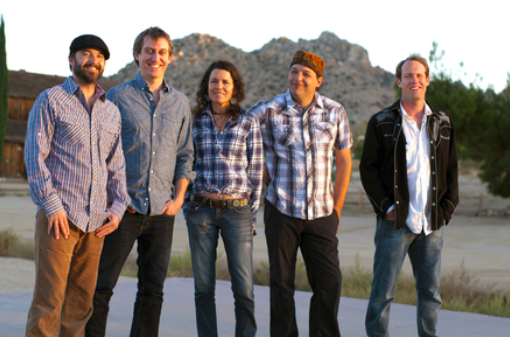 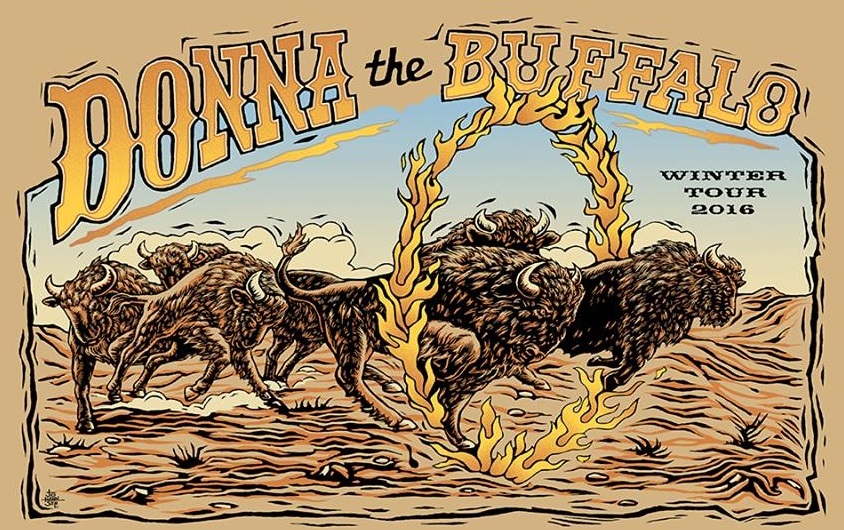 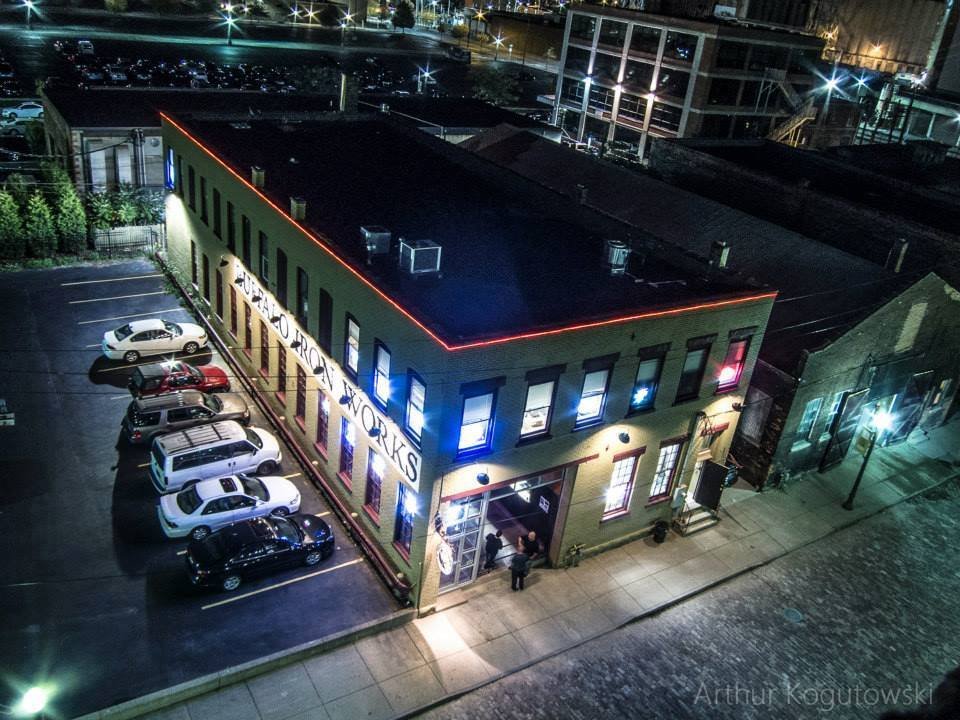 Back in the spring of 2014 the inspiration for BSW (buffalostringworks.org), a music club aimed at benefiting the under-served population on Buffalo’s West side, occurred after a concert performed at P.S 45 International School. At the conclusion of a Brahms’ piano concerto, the student wanted to try the instruments and asked when they could learn how to play them! So it was at that point when Co-Directors Elise Golove, Yuki Numata Resnick and Virginia Barron asked themselves, “When, indeed?!”

Since its creation after that spring concert, Buffalo String works has been providing bi-weekly violin lessons for Buffalo school children, immigrants and refugees, displaced from around the globe. Instructors are experienced local music teachers and violin performance students from the University of Buffalo.

On Sunday, December 13th, my wife, Maureen and our three grand children and I had the opportunity to attend BSW’s Holiday concert. The students beautifully performed six numbers on violin. For the final number, Canon in D, the young violinists were accompanied beautifully by Isaiah Grisha Day on Cello. 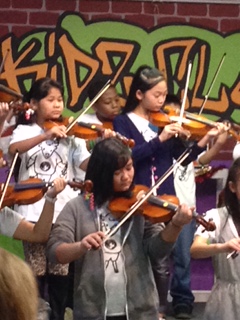 I have to say that hearing these kids, representing eight countries from around the globe, and having participated in the program for as little as three months, play Beethoven’s “Ode to Joy” was remarkable and moving! Capping off a memorable experience after the concert, all in attendance were invited to enjoy snacks prepared and contributed by the families of the young musicians.

The SAMF recognizes and applauds the fine work of BSW. Moreover, we want to do whatever we can to support BSW so that they may expand their efforts and positive impact throughout our community. As BSW is planning to expand their lesson offerings to include cello, the SAMF is very pleased to announce that we have approved the purchase of two cellos that we will be donating to their organization.

The lessons provided by BSW, are undoubtedly having a significant, positive impact on the lives of the students, providing them with a sense of belonging in their new community and once again providing proof that music truly is the universal language!

And cheers to our friends who garnered nominations in some of the other categories!

Album of the Year

Producer of the Year, Non-Classical

We are celebrating this month’s Corporate Sponsor:

My business (Korona Jewelry) was located at 360 Amherst for 88 years, nine doors down from The Sportsmen’s, until we moved to Hertel in 2004. I remember when Dwane and Denise bought the business. The boys were little and Denise would be taking them to the bus stop at the time I was putting jewelry in my window. I started going there about 12 years ago to catch some non-country groups. Country music was never a favorite but it grew on me. I ran into old friends and made many new ones. My favorite performers are the ones that have a lot of original material. Turning phrases, conveying a message, or a unique way of looking at something will always broaden your world. Songwriting and music are one of the most satisfying art forms to me. The quality of the local musicians is something we are lucky to have. What Dwane has done with the bar is just amazing. We all know the sound quality is the best and musicians love playing there. I’ve seen the place transform and I’m happy to be a corporate sponsor and do my little part to keep it rocking.

Korona Jewelry is 115 years old. It was started by my grandfather in New Jersey in 1900. He moved to Buffalo in 1915 and opened on Amherst St. in 1916. This was a thriving business district.He and my father repaired watches and clocks. Some jewelry and giftware were also included. I went a different route learning jewelry fabrication and repair as well as earning my Graduate Gemologist degree. My wife, Noreen, works with all types of pearls and gemstone beads to create necklaces and earrings. My son, Will, is currently learning some fabrication techniques as well as handling our photography and advertising. I love colored stones and try to use only higher quality gems in my pieces. Our shop also carries three award winning designers .From the Celtic designs of “Keith Jack” to the satin finishes of “Kelim’ or the modern “Frederic Duclos” as well as our designs we work to make our jewelry unique.