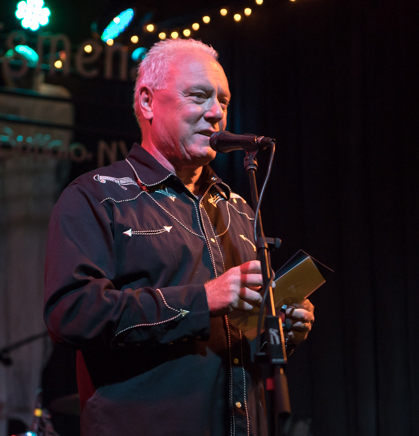 Buffalo Bob Sez: Time to Talk to Your Representatives

Here we are, over five months into quarantine, or whatever this is. I hope all of our members and their families are safe and healthy. 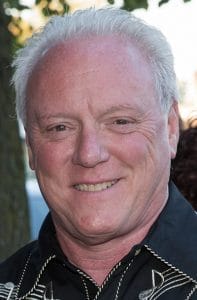 So much has changed in our lives with this pandemic, affecting our safety, social lives, the economy. The SAM Foundation and all our events and plans have come to a screeching halt. Music @ the Library, concerts, festivals, a wide variety of activities, all canceled or postponed indefinitely.

I can count on one hand, and have fingers left over, the amount of times Rose and I have been out to see live music, and it’s always been at the Sportsmen’s Tavern. This was devastating for music venues, especially one that operates seven days per week, putting on hundreds and hundreds of shows per year.

Finally, they got the chance to open up and nobody took your health and safety more seriously than the Hall Family and the staff at the Tavern. Sitting in small clusters with your group, wearing masks, staying at your table, ordering food, no dancing; the Sportsmen’s did it all exactly according to protocols mandated by the state.

So, it was a real kick in the ass to music venues when a State Liquor Authority rule started floating out there that they couldn’t sell tickets for music shows. It was stated that music has to be “incidental,” like a jam is just going to happen to break out and replace all the live shows that were being planned.

That’s an insult to our musicians; live music and musicians are essential, not incidental! We know that music is very important to our quality of life, and that includes the joy of live music.

The JAM and The SAM Foundation do not take political positions on the issues of the day. Often, not always, people escape into music that they love to escape politics. 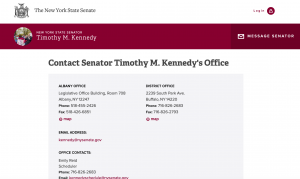 Example of a contact page, from Sen. Tim Kennedy’s site.

But I will say two things about this. First, after the disastrous first couple months of the virus in New York State, it’s my opinion that Gov. Cuomo and the people of New York have done a good job in containing the virus. The virus is dead serious, and it took being serious about it to slow it down. Most of the country right now is in worse shape than New York because they didn’t take it seriously.

The second thing I’ll say is that the new ruling from the SLA is outrageous and improper. It shows no regard for the hard-working people like the Hall Family who have built a business over many decades and have followed all the rules. It just does not make sense. We’re having trouble, as of this writing, even getting clarification on exactly where this directive is coming from. If it came directly from the SLA, does Gov. Cuomo support it? Is this from the Governor?

If it’s safe for restaurants to open, if gyms can operate, if hair salons, many retail stores and many other types of businesses can open their doors, do not pick on music venues, again if they’re operating safely.

If we want to protect our economy, allow and encourage musicians and tavern owners and their staffs the opportunity to make a living when it’s safe and they’ve proven they will follow the guidelines.

Help support live music at venues that do it safely and respectfully, like the Sportsmen’s Tavern. Politicians and legislators at all levels pay attention when they hear from a lot of their constituents on an issue. Please contact your NY State Senator and Assembly Person and ask them to go to the Governor and demand that the state stop interfering with live music venues that follow the rules. Do it today!

If you’re reading this on your computer or phone, you’ll have no trouble finding their websites and phone numbers. Let’s speak up and help the Hall Family and the Sportsmen’s Tavern.