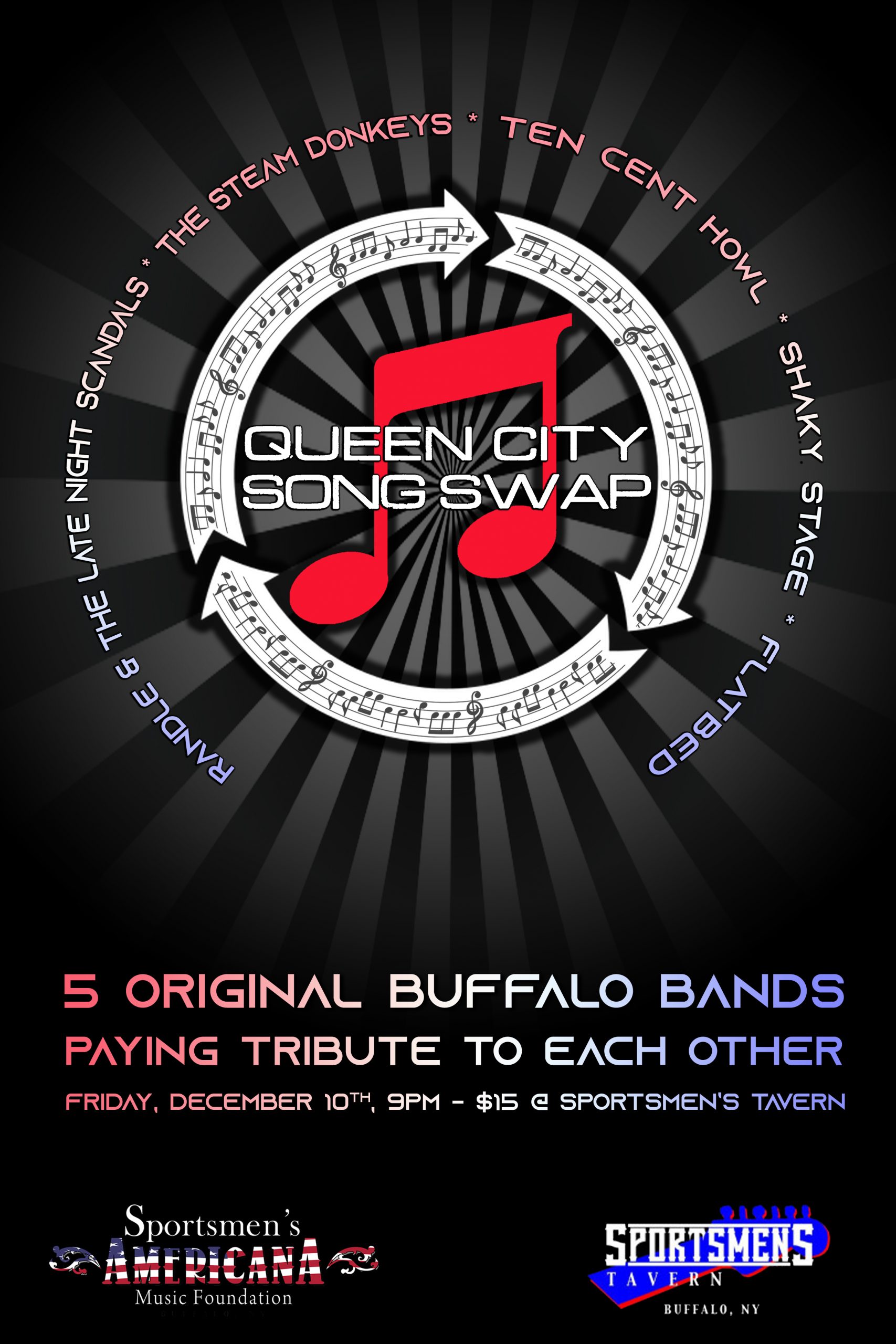 One of the key features in the mission statement of the Sportsmen’s Americana Music Foundation is our support of live, original music from Western New York. We’re all familiar with going out to see a live band and existing in that comfort zone of the band playing songs you already know. Depending on your mood, it might be easier to get into the swing of things when the song is familiar. But you gotta keep an open mind and embrace the music when a band tells you they’re playing one of their original songs; otherwise, you’ll be forever trapped in the golden oldies and classic rock dungeon. 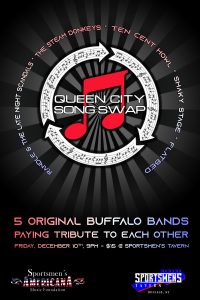 The amount of new music coming out that is highly available, both nationally and locally, is incredible and hard to keep up with. However, all the songs you love and know very well, all started out as, “we’re going to play a new song for you tonight.”

Buffalo and Western New York have many great musicians and performers. Some of them just play cover songs and do it amazingly well. However, there are many bands, duos and solo performers who are working hard to write and perform their own music, especially in the Americana genre. Some songs you take to right away and others you need to hear a couple of times, just like with any national artist coming out with new music.

The SAM Foundation has sponsored many evenings of Emerging Artists Night at the Sportsmen’s Tavern, and one of the rules has always been that the bands have to do at least a couple of original songs.

This whole topic is a source of never-ending discussion among musicians and music fans. Ten Cent Howl has been making waves in the Buffalo Americana scene for almost two decades. They do many great covers, including a version of Tom Waits’ “I Don’t Wanna Grow Up” that I think is better than the original. But songwriter, singer and musician Bill Smith and The Howl are also a band that has many brilliant songs of their own. Smith was recognized by the SAM Foundation as the Jim Lauderdale Songwriter of the Year in 2018. Ten Cent Howl are: Smith-vocals, guitar; Jerry Hall-bass, vocals; Peter Ramos-drums; Charlie Wesley-guitar; and Sasha Pack-keyboards.

Hall came up with the idea of doing a show featuring local bands playing all original music but the twist will be that they have to do the original songs of the other local bands on the bill for that show. And the SAM Foundation is proud to assist Jerry and present and support the Queen City Song Swap.

We’re starting with these five bands but Jerry envisions this continuing as a series; some may be what we call Americana, some may not. The important thing is creating a fresh outlet for the presentation of original music from right here in our hometown.

As Jerry said, “I think we should value original music more. Everybody’s happy to go hear songs they’ve known and loved for years, but at some point, they were all new and unheard!”

The SAMF Songwriter of the Year in 2019 was Buck Quigley of the Steam Donkeys. The Steam Donkeys have been around for a long time performing many inventive cover songs right along with great original music written by Buck. For almost three decades, the Steam Donkeys have delivered rip-snorting ballads and swinging lullabies to audiences throughout Buffalo, Western New York and the whole dang country by putting out CDs and delivering some of the finest live performances you’ll ever see. Buck commented on the idea to share original songs, “It’s always enjoyable to hear another artist perform a song I dreamed up. I sometimes think the real measure of a song is how well it holds up to a variety of interpretations. So, an event like this is a great way to showcase the different approaches each band will take, while more broadly celebrating the local original music scene.” The current lineup for the Steam Donkeys is Buck Quigley-vocals, guitar; John Brady-drums; John Weber-bass; and Dave Kimball-guitar.

Shaky Stage is the third band to be included in the Song Swap. A mashup of roots Americana and punk rock, they’ve been together in some form for more than 10 years. This newest arrangement is working feverishly on a new record. Jeff Bunk is the principal songwriter for the band and sings and plays guitar. The other band members are: Paul O’Keefe-guitar, vocals; Tim Pitcher-guitar, vocals; Jassen Otto-bass, vocals; and Andrew Daniels-drums.

I spoke to Bunk about the upcoming event: “I am thrilled to be included in the inaugural Queen City Song Swap. Most of us involved in this event met at some very long-running tribute shows. Over the years we formed friendships, shared shows and became pretty familiar with each other’s music. To have the opportunity to play some of my favorite songs in front of the bands that created them is humbling and a bit intimidating,” he said.

“As for my stuff, I’ve always felt that I’ve never truly heard my songs. I tend to recall the messy process of songwriting. I know all the warts and the parts that are never quite as great as the idea that got away. To have the opportunity to hear something I’ve created coming at me from the outside will be incredible!”

“I’ve got to hand it to Ten Cent Howl’s Jerry Hall, who put this show together, for realizing that after all those years paying tribute to the greats, why were we not paying tribute to ourselves and the community that supports us? We’re pretty great too!”

Randle and the Late Night Scandals, with an aggressively modern sound that blends traditional blues, soul, funk and rock ‘n’ roll, refuses to settle into any single genre, preferring a continuous evolution of original music. They are: Amanda Markovich-lead singer; Luke Bennett-guitar; Dara Gallagher-bass; and Andrew Daniels will be sitting in on drums.

Amanda, aka Randle, shared her thoughts about the Song Swap. “Luke and I write all of our original music; he writes the music for the most part and I write all the lyrics … most times the music is written first and the lyrics follow … but occasionally I will have the lyrics and a melody first. Once we get what we feel like is a working tune, we will bring it to the other bandmates for input on their parts.”

“We thought this was a great concept since the beginning, just a fun idea all the way around. We have been looking forward to this since pre-pandemic and we are ecstatic that it’s finally going to happen! We are happy to be covering a song from each of these great Buffalo bands. Some will sound like the original version and a couple songs maybe not so much. It’s just an honor to be included. We are extremely excited to hear their take on our songs. No one has covered our music before so it should be very interesting to hear their interpretations.”

Flatbed rounds out the evening of great original music. They are Derek Bassett-guitars, mandolin, vocals; Tom Greier- guitars, banjo, vocals; Joelle Labert-vocals; Scott Passariella-drums; and Michael Tinsmon-bass, vocals. Bassett is the primary songwriter for Flatbed, although  Labert and Greier have written songs as well, and everyone in the band contributes to the arrangements.

Several years ago, Jeff Miers from the Buffalo News said in a review, “The band’s self-titled debut reveals an instantly likable, home-brewed, country-based collection of songs splitting the difference between the ‘Cosmic American Music’ of Gram Parsons and New Riders of the Purple Sage and the folk-based country of Emmylou Harris.”

Labert said, “This is a great idea for a show. We’re really looking forward to it and hoping it will bring some attention to local, original music. We’re really curious to see what songs they are drawn to and how they add their own flavor to them.

Tinsmon added. “This is a great opportunity to learn songs by bands we’ve admired for years. Our city has an unbelievable amount of musical talent and it truly is an honor when people are willing to share their music with us. In the collection of covers we currently perform, we already have songs written by other local artists and it will be fun to add a few more.”

As of this writing I’m not sure of the order the bands will be playing in, but it will be a great night of music and friendship for the Buffalo music community. It’s Friday night, Dec. 10, at 9 p.m. at the Sportsmen’s Tavern. I’d get your tickets early for this inaugural event to honor Buffalo songwriters.