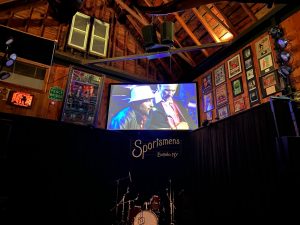 On Monday night, March 7, we had a very special active membership event at the Sportsmen’s Tavern, Buffalo’s “Last Waltz Movie Night.” For the fourth straight sellout performance at Babeville last November, we had arranged for the entire show to be filmed with multiple cameras and extra mics. It was captured by film director, Jeff Garbacz, along with his crew.

I had seen a version of the film a couple of weeks after the show last year and I was very excited to do the world premiere at the Sportsmen’s. Jeff Garbacz did a fantastic job filming the performance, wide-angle shots of Babeville and close-ups of the performers at the right time.

Lou Garbacz, Jeff’s daughter, did the editing and it’s amazing the way she seamlessly pulled it all together. This movie is an extremely professional and high-quality film. Many of the cast and crew and volunteers were there for the screening, along with some active members of the Foundation. Admission was free and the SAMF provided refreshments and snacks. To make sure you’re invited to future events, make sure we have your correct email address — and that you’re an active member. 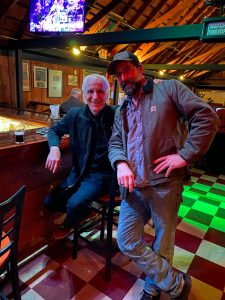 It was exhilarating to watch the entire show and to experience the cast having the opportunity to see the show and relive the excitement the audience feels at the live performance.