There are always great music shows going on in WNY; you could find one every day. The first week of August, however stands out as particularly busy time filled with can’t-miss shows.

On Aug.4 is the AMERIPOLITAN FEST at the brand-new Sportsmen’s Park, right next door to the legendary Sportsmen’s Tavern. What a line-up! Dale Watson, Bill Kirchen & Too Much Fun, The Lustre Kings, The Steam 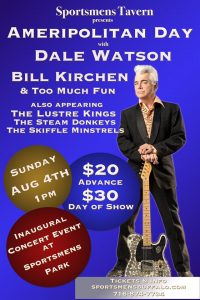 Donkeys and The Skiffle Minstrels. Dale Watson has been the leading force behind the Ameripolitan movement, and I’m sure you’ll recall that the Sportsmen’s Tavern won the Ameripolitan award in 2018 for the greatest venue in the world.

“Americana is original music with prominent rock influence, Ameripolitan is original music with prominent ROOTS influence: Honky Tonk, Rockabilly, Hillbilly, Western Swing, Cajun, and Outlaw music. How about country music? Country Music is so convoluted with pop it’s not country anymore. And because they’ve hijacked the term beyond repair, we aren’t Country either – We ARE AMERIPOLITAN. We’re not leaving Country Music behind, we’re taking ‘real’ country music with us.”

See the Ameripolitan Music website (https://www.ameripolitan.com) for more information about the Ameripolitan scene. For our purposes, Americana and Ameripolitan together provide us with even more opportunities for great music. Ameripolitan is not anti-Americana, if anything it’s anti-modern country pop music, the cliché of pop singers wearing cowboy hats and thinking they’re now country stars.

Of course, there is a lot of crossover between Americana and Ameripolitan. The Steam Donkeys are a beloved WNY Americana fixture, the Skiffle Minstrels won the SAMF award last year as one of the two Bands of the Year and Bill Kirchen is the national spokesman for the SAM Foundation.

Put it all together, that incredible line-up at the new Sportsmen’s Park and you just gotta be there!

Mari Black and the Panfil Brothers at BNHV
Calling all fiddlers and dobro, bango, guitar and piano players

The 75-minute workshops will run concurrently Monday evening in advance of the evening jam session. The workshops begin at 5 p.m. and the jam session at 8 p.m.

For the After Workshops Jam, all workshop participants are invited to sit in and play a few tunes with Mari and Mark or simply enjoy the music – no cost. All others are invited to come and listen for $5!

This is a great opportunity for WNY musicians to sit in with and learn from a world champion fiddler and our local treasures, the Panfil Brothers. See the BNHV website (http://bnhv.org/event/fiddle-guitar-dobro-banjo-piano-workshops-jam-session) for even more details on the workshops and you’ll see that if you’re an Americana – or an Ameripolitan – musician, these workshops are for you. 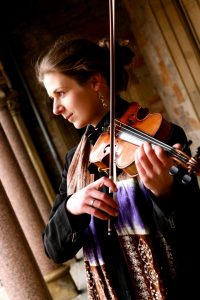 Get Jammin! Always wanted to fiddle? Here’s your chance! This workshop will be an introduction to fiddling for classical musicians and anyone else who is used to primarily reading notes to make music. Black will teach several new tunes and introduce strategies for bowing, fiddle ornamentation and learning by ear. Even if you’ve never tried fiddling before, this workshop will have you hooked and equipped with tunes and skills to keep on jamming.’

Make It Your Own will look at some fun ways to take classic, often-played fiddle tunes and put a unique spin on them so you can start developing your own unique version. Black will take a classic tune, teach it quickly so everyone is ready to go, and then show you how to spiff it up by creating variations, adding rhythmic accompaniment, building harmonies, and taking improvised solos — all the tools you need to elevate a simple tune into your own signature version. This class will be geared toward more experienced fiddlers and folks who are used to learning by ear, but anyone is welcome to participate. Bring your audio recorder to capture ideas.

With Mark and Chris Panfil:

Called “One of the brightest fiddlers around today” by Brian O’Donovan of WGBH Radio’s “A Celtic Sojourn,” multistyle violinist and champion fiddler Black Black has been delighting audiences across the country and around the world with her energetic playing, sparkling stage presence and dazzlingly virtuosic fiddling. Raised on a rich blend of traditional musical styles, she made her entrance onto the international stage when she became Scotland’s Glenfiddich Fiddle Champion, two-time U.S. National Scottish Fiddle Champion and two-time Canadian Maritime Fiddle champion, all within a three-year period.

Since then, she has been spreading her love for dance-based music, performing as a featured artist at Celtic festivals, Scottish Highland Games, celebrated folk venues, world music concert series and acclaimed classical concert venues, including Carnegie Hall. Her passion for traditional music extends far beyond the concert stage, as reflected in her work as a teacher, performance coach, dancer, competition judge and musical ambassador dedicated to connecting people through music.

Known as a master teacher with a playful and unconventional approach to helping students expand their horizons, Black has taught workshops at the Swannanoa Gathering, the Acadia Trad School, the Jink & Diddle School of Scottish Fiddling, the Mark O’Connor fiddle camp, the Tanglewood Festival, the Yale School of Music and more.

Currently touring nationally with her trio, Black’s favorite thing to do is sweep her audience away on a spirited musical adventure featuring dance music from around the globe: Celtic, American and Canadian fiddling, jazz, tango, klezmer, folk and original works.

Mark Panfil is a multi-instrumentalist who has established himself in the Bluegrass world as an accomplished dobro player, solid banjo player and world-class harmonica player. Mark has been teaching dobro at the Augusta Heritage Workshops in Elkins, W.V., on many levels from beginner to advanced since the early ‘90s. He has taught the class by himself and with some of the most well-known players in the world of resonator guitars, including Phil Leadbetter, Rob Ickes and Jerry Douglas. He has also performed on stage as a side man with such players as Bobby Hicks, Mac Wiseman, Chubby Wise and Vassar Clements on banjo and dobro. He has also played with many of the top players in bluegrass today including Douglas, Bryan Sutton and Sally Van Meter in workshop concerts. He has an instructional book available from Mel Bay publishing on “Jamming with a Dobro” and has a highly successful DVD on the Murphy Method label.

Chris is a solo performer, songwriter and multi-instrumentalist. Mandolin, fiddle, harmonica and various guitar styles are his palette. Writing and singing his Americana influenced songs are his passion. He can be found performing alone, along with his talented brother Mark in the Panfil Bros., as the third member of neo-traditional City Fiddle with Gretchen and Phil Banaszak and with Mark, Phil and Rich Schaefer in the bluegrass band and 35-year tradition known as Creekbend.

Mari Black Trio at the Sportsmen’s Tavern: ‘Fiddling Around the World’ 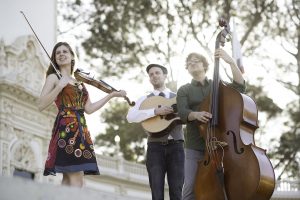 And then two nights later, after the Tuesday night Foundation Night with The Twang Gang on Tuesday, Aug. 6, on Wednesday, Aug. 7, at 7 p.m., the Tavern will host Mari Black for “Fiddling Around the World”

The show will feature Black’s fresh dance-driven music that transcends any musical style, an innovative blend of Celtic, American and Canadian fiddling, jazz, tango, klezmer, folk and original works. With her virtuosic playing, sparkling stage presence and engaging narratives that tie the whole odyssey together, Black takes listeners on a musical journey celebrating tradition and exploring possibility in fiddle styles from around the world. She’ll be joined by her dynamic trio. Black is building a reputation as one of the most dynamic young artists of her generation. To learn more about her, visit www.mariblack.com”

This will be e very cool show. In addition to Black and her band, expect a few surprises along the way. Watch the Sportsmen’s Americana Music Foundation Facebook page for updates.

And then August will continue with a choice of a wide variety of music almost every night at the Sportsmen’s, the River Grille, Babeville, Ironworks, 189 Public House, Larkinville and on and on, including the Woodstock celebration on Aug. 10th at River Fest. 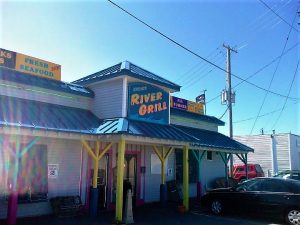 Keep an eye out for SAMF member discounts, too. For example, the River Grill, one of our sponsors, has music every day with some of the same bands that grace the stage at the Sportsmen’s Tavern and other venues in WNY, many of them in the Buffalo Music Hall of Fame. And the River Grill has great food and offers 20% off for SAMF members!

Have a great summer!