If you were at the awards show last year, you know what a really cool night it was.

We had 2017’s Best Band winner Ten Cent Howl serve as the house band for the evening and all the nominees got their chance to perform for the large crowd prior to their category being announced. 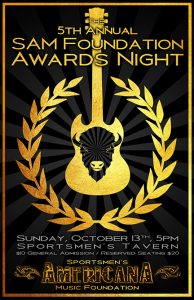 We presented the awards at various intervals throughout the night and it was a great success in honoring our homegrown talent.

This year, 2018 co-winners The Kensingtons and the Skiffle Minstrels, known for the evening as The Skiffingtons, will be the house band for the Awards Show on Sunday, Oct. 13. Most of the nominees will perform with them; a couple Band nominees will do a song as a full band.

As you’re reading this, voting has concluded and the winners are a top-level secret.

We’ll be applying some fancy touches to the tavern and we ask that all of you wear your best cowboy and cowgirl duds.

This is an Americana awards show; celebrate it!  And, the Hall Family will be giving away a pair of Golden Tickets to the Sportsmen’s Tavern!

Thanks to all who attended our Fest on Sept. 14.

It was a great day of music from the Need 2, Ten Cent Howl, Miller and the Other Sinners, the Observers and Sarah Borges & the  Broken Singles, followed by an after-party in the Cave with the Steam Donkeys.

Pictures have been posted by our editor, Elmer Ploetz, on the Sportsmen’s Americana Music Foundation Facebook page and elsewhere in this issue.

Fallfest Party in the Pavillion

Thanks to Rick Manguso, a longtime Foundation member and supporter, for having a party out in Angola at the Grandview Golf Course and Lucy Goose Grill on Sept. 22 with Ten Cent Howl and some other great Western New York musicians. He donated proceeds to the SAM Foundation.

We appreciate what our members do to keep us going.

Music at the Library

SAMF Vice-President Patrick Gormley and I have been meeting with Anne Conable, manager of community engagement at the Buffalo & Erie County Public Library. While there are still some details to be worked out, we’re very excited about the partnership we’re developing with the Library.

The quickest way to tell you about it is to give an example. You know the Tiny Desk series of music concerts on NPR, National Public Radio? If you don’t, look it up, it’s an amazing series.

This is what we’ll be starting with the Library after the first of the year. Once a month concerts in the Library, eventually rotating out to some suburban libraries,  will be recorded and then streamed online  to create the opportunity for many, many people to watch the performances.

And we’ll follow that up with a variety of educational and cultural programs in the libraries. The potential is huge for bringing attention to all our efforts and strengthening the Foundation, and for making the library a very cool place to be. Maybe we can even encourage people of all ages to pick up a book once in awhile. More information coming soon.

… And Video at the Library

While we’re on the library, the Buffalo Music Hall of Fame is involved with a very cool event coming on Oct. 16 in the northtowns.

Every night there is great live music going on in Western New York; really, every night you can easily find a great show to attend.

All our musical partners you see listed in The JAM, and many other venues, have a wide selection of artists playing original music and cover or tribute bands putting their own spin on classic music.

The legendary Sportsmen’s Tavern leads the pack with something like over 700 shows per year, but every place taking a chance on bringing in artists needs customer support to keep on going.   There’s nothing like a great live show; Support live music in WNY!