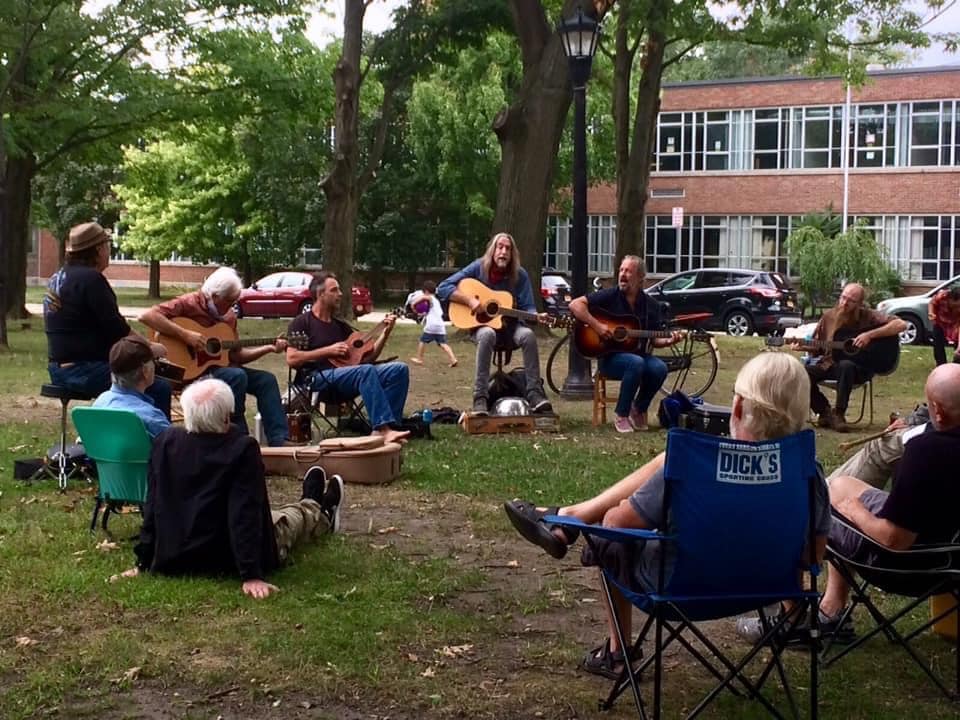 Buckwords: What I did on my summer vacation

Here it is the end of August 2020, and I can say with confidence that this has been a summer unlike any other.

As live music venues continue to struggle for survival, and as opportunities to play live in an environment that’s responsible and sensitive to current conditions remain few, I’ve been taking a lot of solitary walks to clear my head.

By all appearances the wild flora and fauna seem to be going about their business completely unfazed by this COVID-19 pandemic. I watched a pair of beavers paddle across Scajaquada Creek in Delaware Park the other day with the sort of purpose that’s typical of their species.

People like to call them “busy beavers.” I suppose you can call them that, but if you really look at them you’ll see they aren’t rushing around in a frantic hurry the way people often like to use the term “busy.” They’re just moving on with their daily routines, getting things done, not trying to impress anyone.

You don’t hear beavers going around bitching about daily tasks or listing commonplace accomplishments. “I chewed through the trunk of a tree yesterday. I swear it was as big around as a lamppost and the bark tasted like a deer had pissed on it. Then I had to gather up all these branches and float them over to the lodge. Do you think any of the lazy kits would help me? No.” 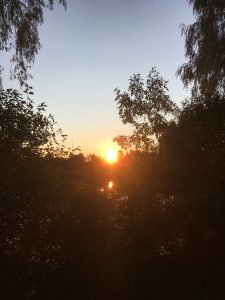 Scene from an early morning walk. Photo by Buck Quigley

All the trees that were showing just their bare bony limbs back in March went right ahead and bloomed like they always do. Their leaves took on all the various shapes and shades of green according to their particular type. They grew thick and cast their pleasant shade through all the sunny days we’ve had.

Songbirds and spiders moved from branch to branch concealed within the greenery, hiding from view in the moonlight but announcing their presence at dawn with their spirited, spritely songs or with their sparkling, intricate webs gleaming like delicate, dewy, diamond ornaments at sunrise.

If you’re the first one hiking on a wooded path early in the morning you can count on walking straight through one and having the sticky elastic web tangle all around your face and hands. As you proceed to freak out, be glad that no one is there to laugh at you on your solitary walk.

Except for the songbirds, who will likely be in absolute hysterics at the sight of your predicament.

Yes, I’ve taken a lot of comfort in appreciating nature this summer. Even as the routine of our human lives has been disrupted so fundamentally this year, there are these other ancient rhythms and harmonies that have been echoing on, uninterrupted. It’s good to walk among these sights and sounds. I wouldn’t call it an “escape” in the true meaning of the word. Every nature walk comes to an end and you find yourself back where you started, reading a book or looking out the window, wondering when the mail carrier is going to arrive.

It’s not easy to escape the fundamental suffering at the root of the human condition. I’ve been delving back into some spiritual writings, and I will say that the Buddha seems to have shown humanity a pathway out of suffering — but it’s not an easy route to tread. People want things to be quick and easy or they tend to lose interest. Deep breathing. Meditation. Mindfulness. Recollecting that there is no escape from growing old, from suffering ill health, from experiencing death. It is useful to remind ourselves on a daily basis that everything now dear to us is prone to change.

Yet many of us don’t have time for that crap and we instinctively feel that all we really need in order to achieve happiness is a better phone with a nicer camera and longer battery life.

Setting aside all this sage wisdom I’ve gained over the summer, I would like to share a recent happy experience that bloomed as unexpectedly as the snow white lotus blossom appears on the sparkling surface of a still pond, fresh from the dark and shitty bottom whence it came.

On Friday, Aug. 28, I had the unexpected pleasure of playing a bunch of songs with some fine musician friends outdoors in the fresh air. Allentown residents including English singer/songwriter Leigh Stoner, Steam Donkeys bassist John Weber and drummer John Brady, along with Cock Robin singer Steve MacDonald have been getting together with sundry guests once a week in Days Park to play tunes in the simple, un-amplified way of ancient troubadours. Well, they don’t have a big PA system in any case. I had the pleasure of riding by on my bike earlier in the summer and listened to a couple of these laid-back shows with a good number of other people who were casually seated, spread out on the grassy lawn and enjoying the vibe. 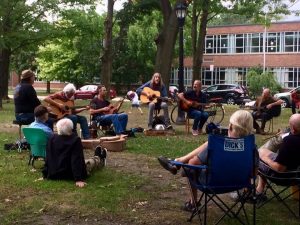 As fate had it, original Steam Donkeys guitarist Charlie Quill was back in town for a bit. Since Steam Donkeys Weber and Brady were already going to be playing, it didn’t require more than a phone call to me in order to put this version of the band back together for a show. We even advertised it on Facebook the day before, just to let a few people know and also to piss off the State Liquor Authority in whatever small way we could. Incidentally, we weren’t charging admission and we weren’t selling alcohol so the S.L.A. was S.O.L. if they’d wanted to shut us down.

Rain threatened but only a few drops fell and it was an awful lot of fun. Tom Fenton showed up and sat in, playing guitar. My wife and daughter came out and it was nice to hang around a little bit more before she returns to college in NYC this fall.

Just to see so many faces smiling at one another, chatting, listening to music, enjoying each other’s company from a still cautious distance — it was a lot like the way I remember human behavior to have been before this virus hit and forced us to change the way we act in public. We were all a little rusty, but I have faith that one day we’ll all be able to come back around to a more normal way of living, once this pandemic passes.

In the meantime, my newfound attention to the natural world gave me a couple of unexpected insights as the evening wound down. First, I saw a few small groups of squirrels and sparrows gathering together to gossip about our strange behavior, and wondering if we would be leaving behind any nuts or scraps of bread.

Then, I saw a baby rabbit just a few months old as it darted into the bushes. Breathless and confused, I heard it asking its mother why so many people were gathered together in one place, and about the strange noises we were making.