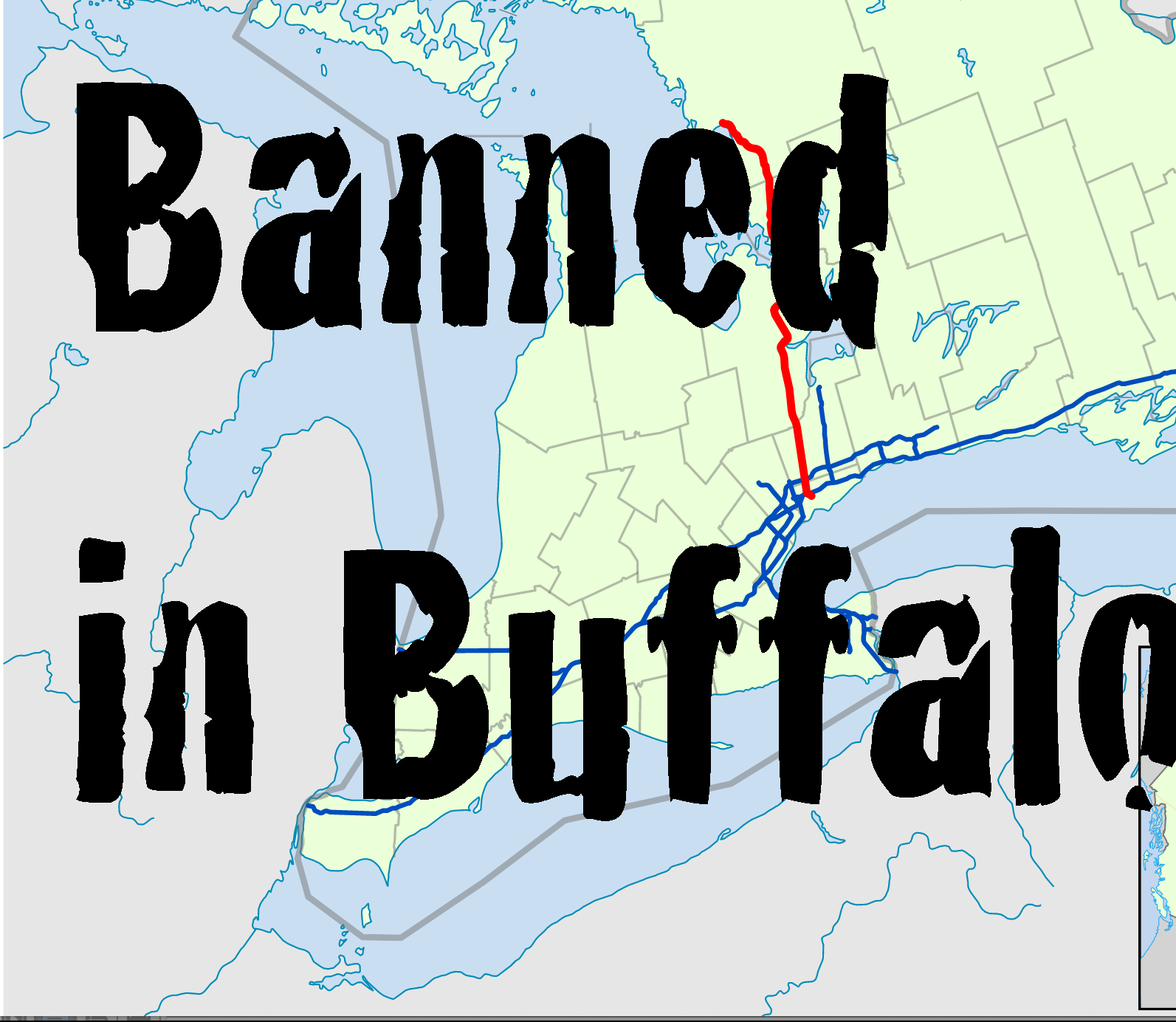 Buckwords: We’re a Band From Buffalo

As I write this month’s dispatch, I’m contemplating the first show that I will have played with my band the Steam Donkeys at the Sportsmen’s Tavern since Christmastime, 2019. Tonight’s the night. By the time you read this, it’ll be over.

Every member of the band has been vaccinated. It’s a relief to feel that we’re doing everything we can to keep ourselves and those we encounter safe from covid transmission. I’m grateful to have these guys as bandmates and friends. I’m also really excited to be playing a bunch of new material and proud that 30 years into this we remain an original music act. That’s something cool.

Since I’m distracted with thoughts of tonight’s show, I’ve decided to take my mind off things by telling you one of the stupidest episodes in the band’s history, because it still makes me laugh.

Come with me now, back to a time before email, cell phones and YouTube. Before digital file-sharing. Back when music was broadcast from radio towers to antennae connected to your radio or stereo. When a brick and mortar radio station was the gatekeeper to people’s ears.

To be a band in Buffalo meant, as it still does today, that you were provincial. You weren’t in NYC, Nashville or LA. Airplay for local bands was basically impossible, given the corporate control of powerful stations. WBNY was your realistic option, as it is today, broadcasting a comparatively weak signal from Buffalo State College. 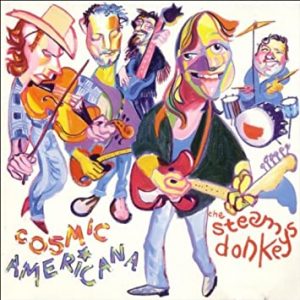 It was on one halcyon day back then that I grabbed a few copies of our self-released CD called “Cosmic Americana” and headed north, toward Canada. The purpose of my trip was to get our music played on the air. I had heard that a Canadian station was open to playing music by American bands within their listening range. Rather than mail a copy, I decided I should show up in person and do a little schmoozing.

I won’t name the station, primarily because I can’t remember the call letters. I do recall that it was located on the Canadian side of the Whirlpool Bridge near Niagara Falls. For some reason I imagined that by crossing the border in broad daylight without any musical instruments in the vehicle I might have more luck than I’d had in the past trying to cross the border as a musician.

People tell me it has changed somewhat, but 30 years ago it was easier to plan a trip to Mars than to successfully cross the border to play a simple gig. American bands routinely got turned back. There were lots of charges and paperwork involved in order to do it properly, and it wasn’t economically viable when measured against your likely pay for performing.

Meanwhile, Canadian bands enjoyed the Canadian content laws that mandated a healthy dose of Canadian music be played by Canadian radio stations. Radio waves don’t stop traveling at the border. This is one reason why relatively small bands from Toronto, let’s say, could build healthy fan bases along the US border in places like Buffalo and Detroit.

Traveling around the South it always surprised me to see that a Canadian band capable of selling out Artpark would be playing a gig at Borders Books. Then I’d get back to Buffalo to find that — lo and behold — that same band maintained a Beatlesque stature.

Radio was the key, I felt. If a Canadian station would play our music, maybe we could get some Canadian fans and be able to afford jumping through the legal loopholes so we could play on the other side of the Niagara River.

It was probably about 9 a.m. on a sunny weekday morning when I pulled up to customs on the Canadian side of the Whirlpool Bridge. I was upbeat and positive when the customs agent began his spiel.

“Where were you born?”

“What’s the purpose of your visit to Canada?”

See, this is where most American musicians of the day faced an existential crisis. Tell the truth and be prepared to be denied entry, or concoct some lie that sounds believable like “I’m going to a strip club on Lundy’s Lane.” I decided that honesty was the best policy.

“I have an appointment to meet with a station manager at (thus and such) radio,” I said.

This pricked up his ears. I briefly explained more as he casually made a couple of notes. I showed him the CD.

He nodded, jotted down a couple of things and motioned toward the main office.

“Go over there and park. You’re going to need to explain this inside.”

I parked. I went inside with my CDs in a small bag. I approached the counter.

“Hi. I was told to come here by the officer in the booth.”

I retold my story about having an appointment to meet with the station manager — which was true, I did call ahead in advance.

There was a pause. The customs agent at the counter seemed a bit stumped as to why I’d been pulled over for something so innocent-sounding. Then, the agent from the booth burst into the room exclaiming “Don’t let him in with those CDs!” 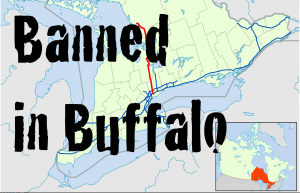 “He admitted that they were BANNED in Buffalo!”

In the confused silence that followed his wild accusation, I realized there was a hilarious misunderstanding unfolding. This was all taking place in the aftermath of the Parents Music Resource Center (PMRC) hearings on Capitol Hill in 1985. For those who weren’t born yet or are too young to remember, this was a chapter in American music censorship that hadn’t been rivaled since conservative DJs had been going around burning Elvis Presley records. Al Gore’s wife Tipper was a co-founder of PMRC.

The PMRC’s concerns were so silly that John Denver, one of the most vanilla artists in history, spoke out against them before Congress. Evidently, this gung-ho Canadian border guard thought he had scooped up a suspicious actor from south of the border who was bent on smuggling in content that might pervert wholesome Canadian youth away from government-approved pastimes like curling and buying milk in a bag.

“No, I said that we’re a BAND from Buffalo. Not that we were BANNED in Buffalo.”

One thing you never want to have happen is to have an authority figure realize that he is completely mistaken while he’s still in the process of making an ass of himself. By now the border guard was truly pissed off.

Instead of simply letting me go, he convinced his coworkers that if they were going to let me proceed with my CDs I would first have to pay a tariff on them. It was like $20 for two or three CDs.

Whatever. It will be worth it if I could just get them to the station, I thought to myself. Maybe I can hit it off with some of the people there and the band can get exposure to Canadian listeners as well as folks on the American side.

I found the station, parked and went inside. After only a couple of minutes waiting in the lobby, I was granted my audience with the station director and a DJ. They put on the CD and began to listen.

“Is that someone playing the fiddle? Is that a pedal steel guitar?” These were a couple of their initial inquiries. They were both so nice, and so complimentary, that I mistook their flattery for genuine enthusiasm and not simply the pleasant demeanor Canadians are famous for around the world.

“Well, I just don’t see how this is going to fit into our format.”

With that, our conquest of Canada was nipped in the bud. For years afterward, it irritated me that by being based in Buffalo we could only plan our tours to head south. And it was mainly in the South that we were able to build a following (such as it was) outside of our hometown. We got signed to Landslide Records, a label based in Atlanta at the time. And thanks to a great radio promotions guy named Al Moss we even garnered airplay on many of the stations that were adopting the fledgling Americana format.

I’ve told this story many times over the years, because it’s so ridiculous and funny to look back upon. Retelling it for you has been a fun distraction for me in the hours leading up to tonight’s show. It’s also sobering to realize that I couldn’t even enter Canada if I wanted to tonight, to listen to a cool Canadian band, or even just sit on a park bench and watch black squirrels scurry around. International travel is still off-limits, so in a real sense we’re ALL banned from Canada for the time being.

When it comes to this global pandemic, sadly, the end is not here yet. I hope more people decide to get vaccinated. I’m tired of losing people to this awful virus. It hurts even more now, knowing there’s a relatively painless alternative to all this dreadful suffering. It gets me down to accept the fact that there is only so much I can do to change people’s minds.

It’s time for me to get ready for the gig. Thanks for reading. I hope I see you at the show tonight, because I intend to play music as if there were no tomorrow.