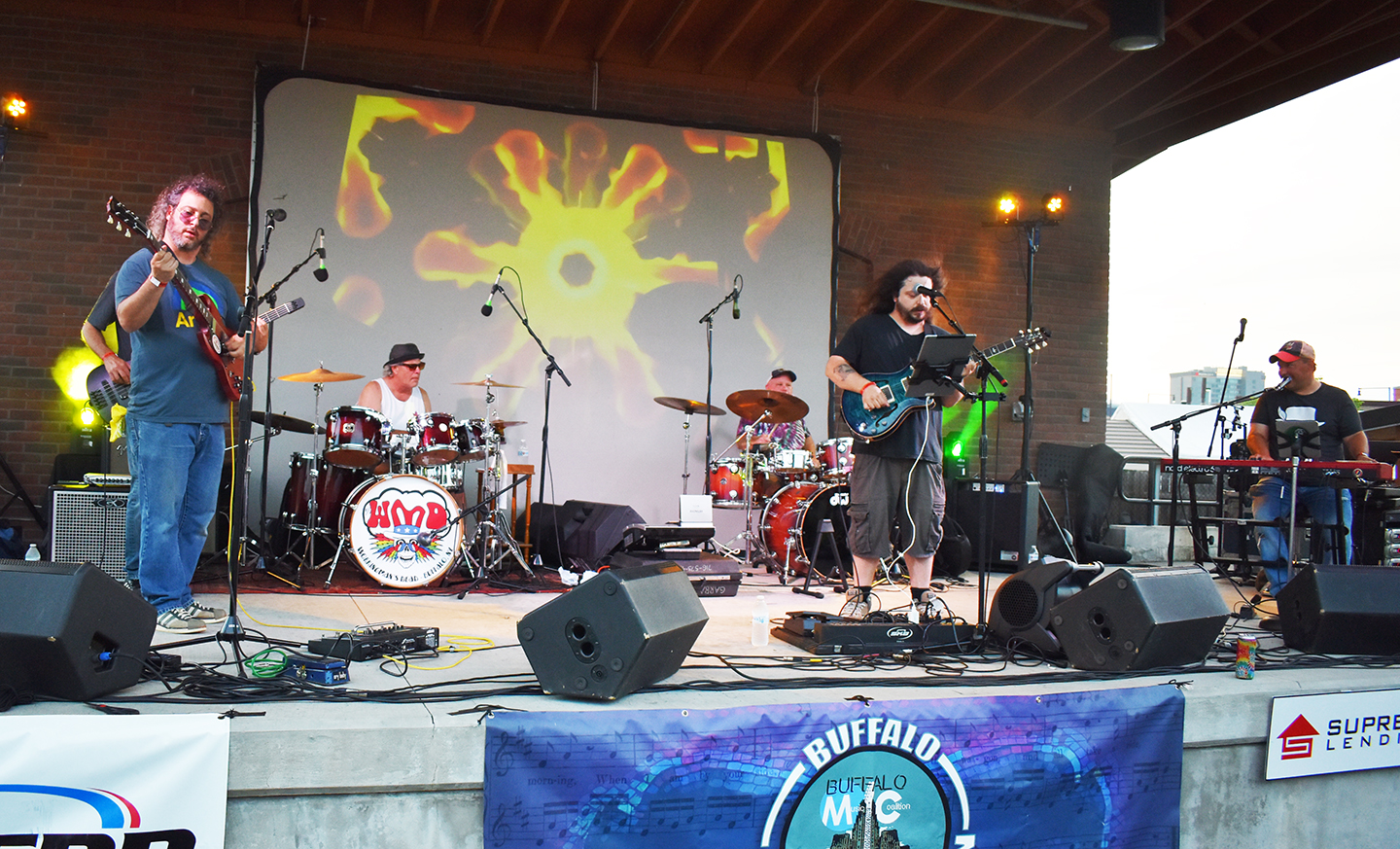 Buckwords: The Summer of Love Revisited

Fifty-five years ago this summer the city of San Francisco experienced an influx of an estimated 100,000 young people to its Haight-Ashbury neighborhood. Given the fact that I was only two years old at the time of the so-called Summer of Love — coupled with the fact that I wasn’t there — I’ll admit that my personal memories of the event are non-existent.

I could tell you a little about my red rocking horse named Topaz, but that’s a whole other story and I don’t want to get into it.

So I refer to media accounts from the time which describe the throngs of youth who were experimenting with drugs and sex while voicing their growing resistance to the draft for a war that was taking place halfway around the world in Southeast Asia and claiming the lives of thousands of American teenagers and young adults.

“Hippies,” as they were labeled, walked outside the proscribed pathways for wholesome American youth. Young men in this crowd began skipping trips to the barber, which infuriated older men who’d served in the military in WWII and Korea and had adopted the buzz cut look for life. Even as their graying hair began thinning.

For young women, the Pill became a game changer in the 1960s. Sex became something a woman could now explore as freely as men — unencumbered by the worry of an unwanted pregnancy. This of course infuriated the old guard as well.

Psychedelic drugs like LSD and psilocybin were being seriously studied for their beneficial value in psychiatry. They were also being studied by the military for their usefulness as a tool in breaking down the will of an enemy combatant. Some people were just using these substances for fun.

Marijuana cigarettes — the herb of choice for many American musicians, writers and artists for decades — also became popular among these rebellious, unkempt, unmanageable youth. 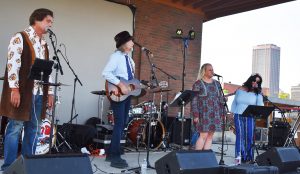 Buck (with the hat) with Paul Todaro, Katie Clark and Donna Kerr-Delano as the Mamas and Papas. Photo by Ronald Amplement

In response, the U.S. government criminalized all these substances, creating an easy way to arrest, imprison and remove long-haired people from the public eye. We now come to see how the ensuing “war on drugs” has been used to target people of color in order to fill our for-profit jails while delivering ongoing hardship to minority communities. Hippies would not have been down with any of that.

In the ensuing years, alcohol has come to be championed as the approved recreational drug — despite its well-documented drawbacks and dangers. Multinational booze companies sponsor most big sporting and music events today, and lots of small ones as well.

Meanwhile, Big Pharma seems to focus its advertising on TV, where they can speak to you one-on-one and suggest that you ask your doctor if a prescription for Fillinthablanc might be right for you.

Mind you, I’m not claiming to understand the present. Not by a long shot. And I don’t claim that my version of the past is completely accurate. But it’s mine, doggone it! So just give me a minute.

Now, what was I saying?

During that same year as the Summer of Love, Hippies were looking at those figures, questioning our national priorities, and getting clubbed with a nightstick for their efforts. In 1968 the number of US deaths in Vietnam increased to 16,899.

And now, after half a century of abrupt prohibition, psychedelics are being used to help treat American soldiers suffering with battle-induced PTSD acquired while serving in our various conflicts around the globe.

That kind of irony would have made Richard Nixon lose his freaking shit. 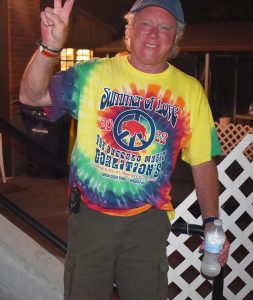 Anyway, the Monterey International Pop Festival was an iconic event that took place during the 1967 Summer of Love. It was held at the Monterey County Fairgrounds, just a couple hours drive south of San Francisco, and it featured some of the biggest musical acts that were being embraced by the growing youth counterculture.

Today, the marquee reads like a who’s who of oldies hitmakers like the Mamas and the Papas, Simon and Garfunkel, and the Association. The Jefferson Airplane, the Animals and the Byrds had some name cache at this point as well, but the weekend is perhaps most widely remembered for introducing the world to the Who, Janis Joplin, Jimi Hendrix and Otis Redding.

The ensuing documentary film by D.A. Pennebaker captured the grooviness for posterity and it became widely viewed on college campuses and at midnight movies throughout the 1970s and 1980s. So while actual crowd estimates of the weekend-long event range from 25,000 to 90,000, the actual music venue held just 7,000 people. Thus, the legendary status of Monterey Pop is really a testament to the power of documentary cinema — specifically the “Rock Doc” — to communicate to a vast audience.

I saw the movie myself as a teenager at the student union theater on the UB south campus when I was still in high school. If you were into records and stuff like I was, you just had to see Monterey Pop. Janis Joplin singing her lungs out. Jimi Hendrix burning his guitar. Brian Jones just hanging out with Nico, digging the scene.

By the time I saw the movie, just over a decade had passed. Punk rock had been railing against the naïveté of the hippies as well as the whole corporate pop music culture for a few years.

Ronald Reagan, the comically conservative California Governor who had demonized the hippies and all their loud rock music and liquid light shows, was now president of the United States!

First Lady Nancy Reagan became the commander-in-chief of the war on drugs. A group called the Partnership for a Drug-Free America produced a public service announcement warning young people that drugs were like a hot frying pan and that their brains were like raw eggs. 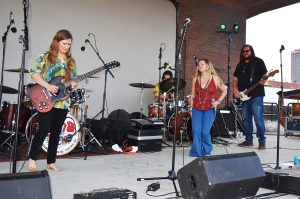 When the stern guy with the vibe of a high school gym teacher cracked the egg and let it sizzle on the pan, he looked directly into the camera and challenged any wise guys who might be watching with the boast “Any questions?”

Among the stoner crowd, it was way too easy to ridicule such a ham-handed spectacle. “Yeah, I have a question. What drugs are you on, dude? That’s just a frying pan. Those are just eggs.”

Fashion took a decidedly preppy turn away from bell bottoms during those Reagan years and cocaine became the drug to take. Hippie values were seen as pathetically childish and outdated. It was now Capitalism Gone Wild, with Wall Street taking the wheel all jacked up on coke but wearing a business suit. Incoherent and raging, but looking good. The times got colder. Peace and love were, like, Squaresville, man.

It’s all nostalgia now. But I find a lot to be said for so-called hippie values. Celebrating individuality. Sharing and protecting the Earth. Rejecting hate. Advocating for peace. Loving one another. And all of it done against a really good soundtrack. Is that so bad?

So when Bob McLennan let me know that the Buffalo Music Coalition was staging a tribute to the Monterey International Pop Festival and asked if I’d be interested in playing the role of John Phillips in the Mamas and the Papas, it immediately sounded like fun. 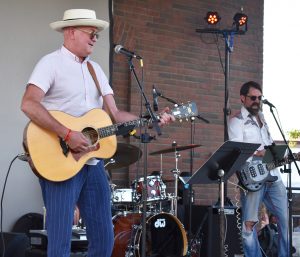 McLennan is the guy behind the “Last Waltz” tribute show that takes place at Babeville every November. He was also involved in the Woodstock tribute the Buffalo Music Coalition staged at RiverFest Park in 2019 to celebrate the 50th anniversary of that counterculture event.

In the “Last Waltz,” I perform the role of Ronnie Hawkins and at the Woodstock tribute, I played Country Joe McDonald. If you don’t think it was fun to lead a huge crowd in spelling out F-U-C-K and then chanting the word over and over at the top of their lungs like Country Joe did at Woodstock … well, you my friend, are mistaken.

I enjoy these one-off shows because I know that all of the performers are gonna be great musicians looking to have a fun time. McLennan already had Donna Kerr-Delano, Kate Clark and Paul Todaro lined up to be the rest of the Mamas and the Papas, so I knew I’d have to do some woodshedding since they’re all such fine singers. I’d also have to find a cool fur hat to wear. Thankfully, my friend Mark Missert is a tie-dye artist who happens to own such a vintage piece and is kind when it comes to sharing.

Preparing for the role really gave me a newfound respect for John Phillips as a songwriter. I’ve of course heard “California Dreaming,” “Monday, Monday” and “San Francisco” just about all my life, but it wasn’t until I sat down with a guitar to learn how to play them that I began to appreciate the cleverness of the chords and the melodies. And, of course, the harmonies.

The four of us got together and practiced a couple of times before rehearsing with drummer Damone Jackson and bassist Jerry Hall. Donna even worked out the flute solo despite it being in an odd key for a flute.

It was a treat to hang out with the other musicians at the rehearsals. Eric Crittenden is a musical powerhouse in his own right, but also add Tony Aversa on guitar to the aforementioned rhythm section of Jerry Hall and Damone Jackson — it’s a very strong combo. Hall’s wife Kate Starr is a great singer, and they sound wonderful together. 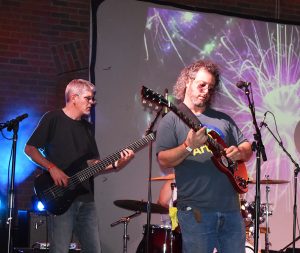 I got to hear Bill Smith going through all the Byrds material with Hall harmonizing perfectly like the way they do in Ten Cent Howl. Blaise Mercedes was on hand to lend her terrific voice to the Janis tunes.

By the time we finished that last run-through the night before the show, I couldn’t wait to hear all the acts I hadn’t yet heard in rehearsals.

The weather was perfect for Sue Kincaid to do her homage to Grace Slick of the Jefferson Airplane. Donna Kerr-Delano and Kate Clark (aka the Mamas) pulled double-duty and turned in a tuneful version of Simon and Garfunkel.

Jeremy Hoyle was great at growling out those Eric Burdon Animals vocals. Crittenden loaded his own kind of soul onto the Otis Redding’s “Try a Little Tenderness.” Tom Stahl was the “Secret Agent Man,” leading the band on that Johnny Rivers classic.

Jeff Miers strapped on the guitar to lead a powerful homage to the Who. They were followed by hot local band Grosh — whose guitarist Grace Lougen has now embodied Jimi Hendrix’s performances at both Woodstock and Monterey Pop. She has a natural way with the instrument and it’s a pleasure to watch her play.

After over four hours of sunny summer weather and a good-vibrating tribute to the Monterey International Pop Festival, the large, happy crowd mellowed into the sunset with a full-length performance by top-notch tribute band Workingman’s Dead. It was a grateful ending to a sweet summer day filled with a lot of music that still packs the same emotional punch it carried over half a century ago.