Buckwords: The magic of the pedal steel guitar … and Hall of Famer Kenny Petersen

The pedal steel guitar is a very odd bird of an instrument. Unlike the banjo, the piano or the acoustic guitar — whose roots can be traced back several hundred years to Africa and Europe — the origins of the pedal steel can be traced to the late 1800s, in Hawaii.

It’s the same idea you see employed by a resonator guitarist in a bluegrass band or a slide guitarist playing the blues. It wasn’t until the 1930s, when electric pickups were being used to amplify steel strings through speakers, that the electric lap steel really began to come into its own with improved volume and sustain. There were still a couple of innovations to come, however. 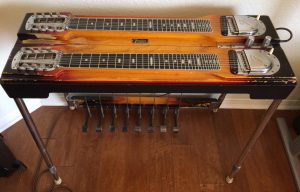 To accommodate different tunings that a player would likely need during the course of a live performance, additional necks were added. These were known as “console” steel guitars—sometimes featuring up to four different necks.

The added size and weight moved the instruments off of a player’s lap and onto a stand. It was this innovation that freed a player’s feet and knees to operate the pedals and levers that would be added in the 1950s to change the pitch of notes and chords after the strings had been plucked.

Thus, the pedal steel guitar evolved into the strange bird that it is, possessing one of the most haunting, jubilant and unique songs among all musical instruments, when played by a master. Its natural habitat is American Country Music.

BQ: When did you start playing music, and what was your first instrument?

KP: When I was nine years old my father bought me a used four-string banjo. My two older brothers were taking guitar lessons at the time and I think my father had a future family band in mind. 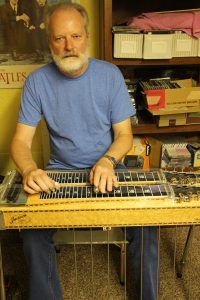 Kenny Petersen at the pedal steel.

BQ: When, how and why did you start playing the pedal steel? What was it that drew you toward it?

KP: In the early 1970’s the country/rock scene was beginning to use the pedal steel guitar. The sound drew me in and then when I saw a steel being played in a local band, I thought it was the coolest thing and I had to have one. I purchased a used pedal steel guitar and started taking lessons from local steel guitar teacher Gene Strong.

BQ: Can you think of any songs that are particularly challenging to play on pedal steel?

KP: “Raisin the Dickens” by Buddy Emmons is a challenging pedal steel instrumental due to the speed of the picking and the use of the bar hop.

BQ: Tell us what a bar hop is, please.

KP: It’s like a hammer-on on a regular guitar, but in this case you take a steel bar and bounce it on and off the strings.

BQ: You must have memories of particular shows and venues. Could you share with us a few that really stand out, and why?

KP: Meeting an icon like George Jones and opening for him at St. Bonaventure University is one of my top memories. Playing on the stage with Redd Volkaert and Jim Lauderdale at the Sportsmen’s Tavern are two of my favorite memories. Being given the opportunity to play with such great musicians was an honor. I think playing with guys with that kind of talent level raises your own performance.

BQ: I understand you’ll be inducted into the Buffalo Music Hall of Fame (the induction ceremony is Thursday, Oct. 3, at the Cardinal O’Hara Performing Arts Center).  Congratulations! How does that make you feel?

KP: Yes, I’m being inducted into the Buffalo Music Hall of Fame this October. It’s quite an honor and one I am very proud of, but it’s also a little bittersweet. As you may or may not know, about two years ago I was diagnosed with a rare from of Parkinson’s disease and it is slowly taking away the coordination in my hands and fingers. This has been a tough pill to swallow and the reason for my early retirement. 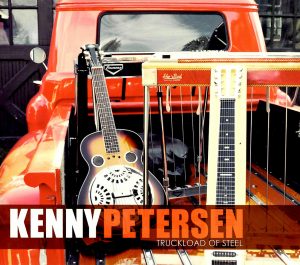 But with the release of my solo album and now my induction into the BMHOF, it’s made my 42 years of performing all the more memorable and fulfilling. The cherry on top.

I’ve been blessed to be able to perform and record with some of the best local artists and bands through the years. I cannot thank all of them enough for letting me be part of their musical projects.

I also need to thank my family and friends for their unwavering support and all the musical friendships I’ve made through the years. Thank you.