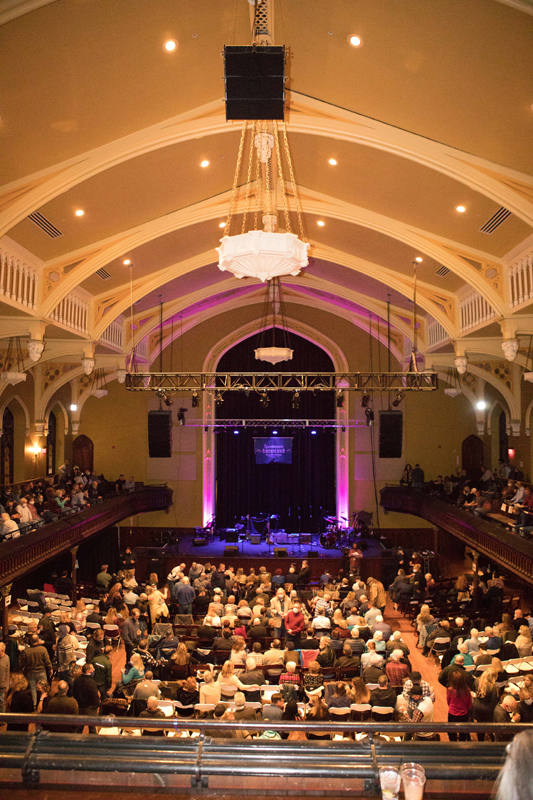 Buckwords: The Church of the Last Waltz

After skipping 2020 due to reasons we all know all too well, the Sportsmen’s Americana Music Foundation was able to bring back its live recreation of the famous concert film “The Last Waltz” at Babeville on Friday, Nov. 19.

This one brings the tally up to four sold-out performances, so it’s fair to say the show has become a holiday staple in Buffalo. Some audience members attend every year, while others come for the first time. Whether veterans or newbies, the crowd never fails to delight in the parade of guest performers as each takes their turn in the spotlight.

One of the first people I saw at Babeville at dress rehearsal the night before the performance was Bob McLennan. This whole thing was his idea—staging a recreation of the documentary film. He’d let his hair grow a bit since the last production, two years ago. The thing about Bob is that he’s the sort of guy who realizes that coming up with a good idea is not really an accomplishment. Lots of people have good ideas. It’s the bringing that idea into reality part that’s so tricky. So this show is really his magic trick.

McLennan is an excellent organizer of people. There are a lot of creative egos he has to deal with in putting on a production of this nature. Some of his secrets seem to lie in his direct communication style, his hands-on involvement in most elements of the production, and his constant encouragement and good humor. When I saw him at rehearsal, I showed him I still have the hawk-shaped hat pin in my cowboy hat—which he lent me a few years ago. It was a sentiment that provoked a smile. 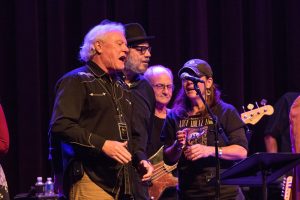 McLennan was also wise enough to find musical director Doug Yeomans to lead the huge herd of cats that comprise the cast. Through the efforts of Doug and stage manager Tom Makar, and the constant behind-the-scenes help of Sue Kincaid, the show maintains its flow.

Throughout the evening, the musical backbone remains The Band itself: Yeomans as Robbie Robertson, Peter Holguin as Levon Helm, Ron Davis as Garth Hudson—and new to the cast this year—Jim Brucato as Rick Danko and Jim Beishline as Richard Manuel.

Special kudos also go to Simone Appleby and Leslie Gardner for stepping in to fill the soulful shoes of Cleotha and Yvonne Staples, as well as to Sara Rogers for lending her smooth, effortless vocals to the role of Joni Mitchell. The fact that Buffalo enjoys such a depth of musical talent deserves a moment of pause, appreciation and recognition. Oh, and the horns! Each year the show has been blessed with a great horn section, just to make things more heavenly: Matt Harris on sax, Tim Clarke on trumpet, Al Jaenecki on trombone and Harry Fackelman on sax. 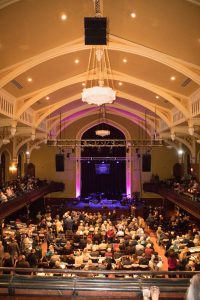 Speaking of heavenly, another essential element of the production that seldom gets due credit is the fabulous locale, Babeville. A huge thank you to venue manager Anna Kapechuck and everyone there for always being kind and graceful hosts. The production really requires a site with a stage that can mimic San Francisco’s defunct Winterland Ballroom, where the original Last Waltz took place. Thanks again to Ken Maggs for the great lighting and to Jesse Rejewski for the terrific sound both onstage and in the front of house to enhance that illusion.

We’re so lucky we still have the soaring Gothic Revival structure of Babeville, which was built in 1874 by Buffalo architect John Selkirk. By the 1990s, the church was left derelict. Subsequently taken over by the city, the crumbling structure was slated for the wrecking ball.

Its resurrection, beginning in the mid-1990s — after outcries from preservationists and other astute members of the community — began with legal action followed by fundraising to allow the city to make emergency repairs to the forlorn building.

By 1999, Buffalo-born musician and cultural icon Ani DiFranco and Scot Fisher, president of DiFranco’s label Righteous Babe Records, put together a proposal that would convert the crumbling church into an event venue, while also serving as office space for Righteous Babe. An additional bit of construction created a new home for Hallwalls Contemporary Arts Center — Buffalo’s internationally recognized and respected home for contemporary visual, musical and literary art.

I draw attention to the venue because it really struck me this year, during the dress rehearsal on Thursday night, how important the majestic ceiling, the wide main floor, the long, sweeping balcony and the grand backdrop is for creating a communal, reverential mood. It is still a bit like being in church. But with rock music and cocktails, if you like.

All things being identical, the show would not have nearly the same impact if it were staged in a smaller music club, especially one with low ceilings. And of course, where would you hide two-dozen guest performers backstage at such a club? Backstage at Babeville means descending a grand staircase to a hallway housing a few good-sized dressing rooms and a communal area with a piano.

As you might imagine, spontaneous jams occur when you corral 20 musicians in a given space with a bunch of guitars and an open keyboard sitting unused. And in some cases, there can be three full hours to fill before a performer’s cue on stage. A lot of tunes get played, a lot of stories get swapped, and laughter of all kinds ensues.

Another thing I find endearing about the show is when emcee Phil Knoerzer introduces the members of The Band and identifies the various towns in Ontario where four-fifths of the members grew up (with the exception of Arkansas native Levon Helm).

You wouldn’t expect this anywhere else in the United States, but in Buffalo you can hear the Canadian place-names striking a chord of recognition with the audience. As Buffalonians, we know them as towns situated within a short drive from the Great Lakes and the mighty river that form our shared border. Before The Band rose to global recognition, they began as regional musicians from our neck of the woods, really.

This was my fourth turn playing the role of Ronnie Hawkins, the Arkansas rockabilly wild man who assembled the young Canadian musicians as his backing band, calling them the Hawks. That’s how they were known before Bob Dylan tapped them to be HIS band. And before they proceeded on their own, known simply as The Band.

I like to picture them all as inexperienced young men in the early 1960s, playing music joints on Toronto’s Yonge Street, in between go-go dancers. It must have been a pretty fast-paced, sorta scary, fun time. I try to recreate that kind of energy when I play my part.

I then enjoy watching the show from the wings. I get to turn in my role within the first ten minutes, so I’m free for three hours. I get to watch the other performers right alongside the delighted faces of audience members. Watching pent up emotions in the crowd this year was like watching a long-frozen river cracking loose and beginning to flow again.

By the end they are all smiling. Cheering. Standing. Dancing.

Then I watched the entire congregation bundle up and leave into the dark, chilly night. And as I looked back over my shoulder in the direction where the altar used to be, I thought how beautiful it is to celebrate live music again in front of an enthusiastic assembly of true believers.