My mother, Betty Lou, would’ve turned 99 years old today. If she were still around, I’d definitely share with her the same story I’m about to tell you, about my day yesterday.

She would of course listen — because she was an excellent listener — and I can picture her saying “Isn’t life something!” at the end of this story that I’m about to relate. She’d probably be smiling and shaking her head in wonderment.

Of course, every story has layers that can be traced back through time almost like layers of rock in the Earth’s crust. In this way, the expert storyteller will work in a similar fashion as the most skillful and experienced geologists and prospectors — who will sometimes divine what lies beneath by gazing only at the surface. Legends persist of these intrepid souls who dug down and sifted through the layers of silt by panning with frozen fingertips near an icy Klondike stream to reveal, in the fading rays of a bitter January day, a brilliant, shimmering nugget of gold!

What was I talking about?

Oh! Storytellers. Yes. You see, a good one would have already moved us much further ahead in the narrative. But, dear reader, since we’re stuck with one another for the next few minutes, let’s make the best of it. Shall we? Thank you.

Anyway, yesterday I went into a studio with the Steam Donkeys to record some new songs. We did five of them, overdubs and all, in about 12 hours. I suppose that can sound like a lot of work. But it felt more like play. We were “playing” music, after all. So let me rephrase it and say that I got to spend 12 hours playing with my friends yesterday.

This is neither the time nor place to question whether 12 hours is an excessive amount of playtime for a person my age. 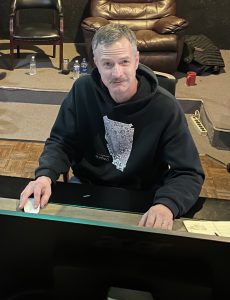 We did this project over at Black Rock EPS with Joe Mattimore engineering. This is the first time we’ve recorded anything with him, but we’ve known one another for years and he plays with Dave Kimball and John Weber in A Band Named Sue. It’s great when you’re working with another musician who appreciates your material as much as you do.

About a year ago I wrote one of these columns in the JAM wherein I talked a bit about the songwriting process. I was sharing some tips and habits that I’ve found useful when you’re writing a song. Like with any kind of artistic expression, there’s an abyss that must be crossed between the imagination and the real world. How does one make that leap? I can hear this tune in my head, so maybe I strum some chords and sing a melody and add some words.

Making a professional recording is kind of the next big step in the process. I’m lucky enough to have a great band I can play my ideas to in the privacy of a rehearsal. Not every song gels. Some work better than others. Some work almost instantaneously. Others wait their turn, sometimes morphing into different tunes altogether. The whole experience is constantly surprising and fun. Eventually, we wind up with a bunch of songs that we feel ready to put down for posterity.

Of course, there are a lot of ways to make a record these days. During the pandemic, many recording artists showed how musicians can do so much working remotely and swapping digital files back and forth. Yesterday was very old school in the sense that we all were there recording and listening back to things together, live. Decisions could be made on the spot, which is a creative advantage when you have a group of people working on something.

I’m excited for the next step, which is mixing the recordings. That’s the part of process where all those dials and sliders on a screen (formerly actual knobs and sliders on a mixing board) get manipulated to make everything sound just so. It’s where all the ingredients that you laid out in the form of separate music tracks for different drums and guitars and vocals get mixed together. So none of these tunes are ready for consumption yet, but they’re definitely being prepared with skill and love.

I’ve been recording stuff with bands in studios for about 35 years now. Some of the places, like Image Studio in Olcott and BCMK on Delaware Avenue, are no more. With all the technology increasingly available for home use, it may one day be hard to describe what a specialized place a recording studio once was, and why they were places where the highest quality recordings were made.

I think of the story of Elvis Presley making a novelty recording at Sun Studio in 1953 as a birthday present for his mother, before he became the King of Rock and Roll. He made her a professional recording of himself that she could play over and over, like a Dean Martin record. If only they had had the money for a record player. 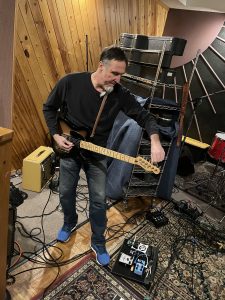 That’s really why anyone becomes possessed with the idea to make a record. You want to put your music into a permanent sort of format that people can share. And you hope it finds people who enjoy it.

When I arrived at Black Rock EPS for the session yesterday, I looked around the studio and control room and I vividly remembered that I had recorded there once before. I also knew it was almost exactly 21 years ago, as a matter of fact.

At the time, it was called Audio Magic and I was there to record a song I’d written called “That Sweet Old Feeling.” I’d gotten the title from a family story my Mom had shared with me. Marc Hunt was working the board that day.

The track is on the Steam Donkeys’ “Buffalo, NY” CD and it’s just me singing and playing rhythm and lead guitar. I remember recording it because at the time my daughter was only a few months old, swaddled in a blanket and sleeping in a little basket right next to Marc, who was keeping one eye on her and the other eye on various recording levels while I sat alone in the studio strumming a guitar and crooning away.

I know my mother got a kick out of that image when I told her about it at the time. And she really enjoyed the song.

My daughter is 21 years old now. She’s in her senior year at New York University, studying in the College of Global Public Health and already taking classes toward her Masters Degree. My Mom, who was a dedicated Registered Nurse, would be extremely proud of her today.

Meanwhile, I was back in that same recording studio on what would have been my Mom’s 99th Birthday, strumming a guitar and singing away to a bunch of brand new tunes.