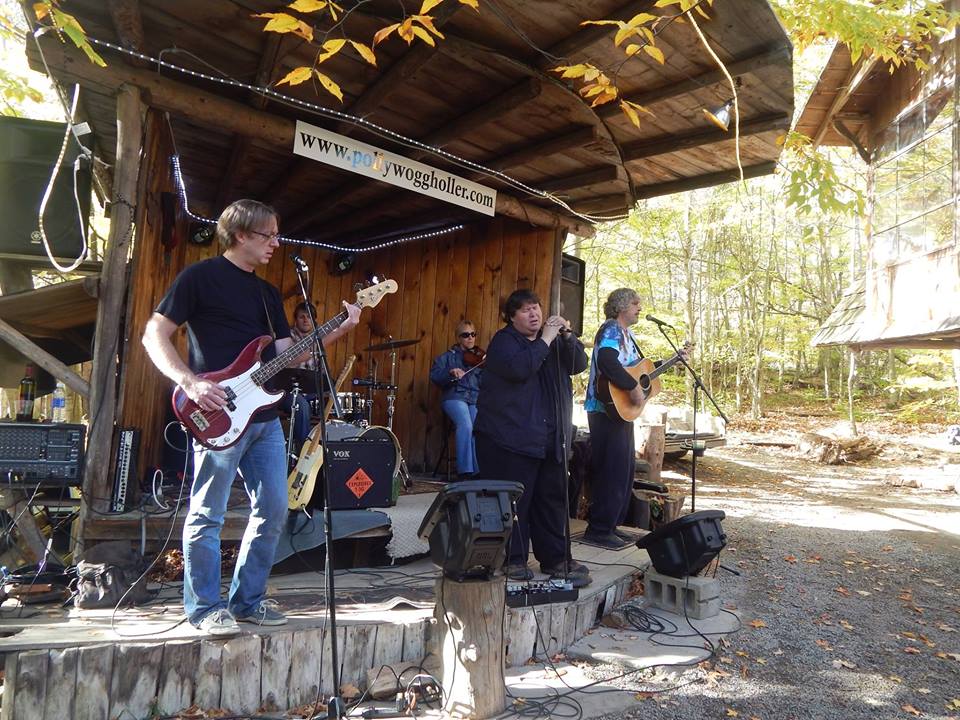 I’ve never tried to write a story while riding on a train across New York State, but there’s a first time for everything. I’ve got my window seat facing south as we wind through all the lush summer greenery, headed for the Big City. Past woodland and dairy farms, crossing two-lane roads with pickup trucks towing horse trailers waiting for the train to pass. The whistle blows a warning as we go rumbling through little towns and train crossings. A bored-looking carload of young people have gotten out and are taking pictures of the Amtrak railcar as it zips past.

There’s a different way of looking at life when you’re out in the country. I don’t mean the fringe suburbs of a city, where you might have to drive a couple of miles to find an all-night gas station. I’m talking about places with dirt roads that aren’t strictly named. The kind of places where you really have no business being unless you know someone, or you own some land nearby, maybe.

Elsewhere in this issue you can read about the history of the place. I found out about it by accident, or kismet. Call it what you will. Even before we were married, my wife and I used to get out of town and set up a tent at Palmer’s Pond State Forest near West Almond, N.Y. It was remote and free. You could do anything you wanted because there was virtually no one around to object. It was there we painted an old station wagon pink and cream-colored, with black trim. Like the color scheme of the Elvis Presley stamp. We did it with leftover latex paint and brushes.

Even the park ranger who arrived and witnessed us effectively changing the color scheme of our vehicle out in the woods didn’t bat an eye. He just reminded us to clean up and put the fire out whenever we decided to leave.

We had no idea that less than a mile away the eco-resort Pollywogg Holler was continuing to take shape and just beginning to become known. This was pre-internet. Looking back, it makes sense that a place like it would’ve needed a lot of privacy and freedom to blossom and grow the way it did.

So I’ll flash forward several years from those camping trips at Palmer’s Pond. Now my wife and I have taken our young daughter to a more proper campground near Angelica, N.Y. — just a few miles east on the Southern Tier Expressway. Angelica is where we had eloped probably 10 years before, so we’ll show the kid around, we figured.

She’d heard the stories about how our wedding reception consisted of a bunch of guys in hunting gear, sitting around the bar across the street from the Justice of the Peace, pumping quarters into the jukebox to play Bob Seger tunes for the newly married couple. It was the biggest news in town since that guy let his cow live inside the family home. 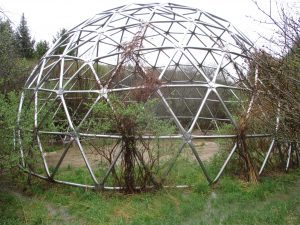 In the small country store there I saw a pamphlet advertising “Pollywog Holler—Eco-Resort.” There were a couple of photographs of elaborate tree houses and the large aluminum frame of a Buckminster Fuller-styled geodesic dome.

So we drove over to West Almond and followed the map to take a dirt road past the turnoff for Palmer’s Pond until we came to a small structure. We saw a parked car. It was a sunny weekday afternoon so we parked by the side of the road and watched the dust swirl and settle in the sun as insects whirred all around in the forest. Not a soul in sight.

We were starting to look at the paths that led into the trees when our guide materialized, smiling and friendly as a Hobbit. This was how we met Mickey Castle. He happened to be hanging around. We told him we’d seen the pamphlet and decided to check the place out.

He explained that they were currently closed, but gave us the grand tour, including a look at the new sawmill that they’d been using to make the lumber for all the inventive structures around the property. Inside the dome, we swung on a big, circular trampoline-like platform that hung from the ceiling. He offered us homemade wine and told us the story of his parents’ vision for the place.

Years passed before I began to hear about bands playing at this weird little hippie getaway out in the sticks called Pollywogg Holler. By the time the Steam Donkeys got to playing there, it had already started drawing people from all over Western New York and the Southern Tier. One trip that stands out was when we traveled there for a gig and my wife, daughter and her friend came along. We rented a cabin and stayed the night. 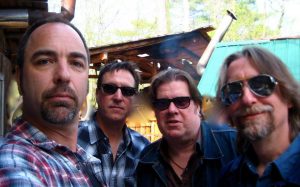 Steam Donkeys at the Holler in bygone days.

I’ll say there was something magical about looking out from the small, battery-powered stage to see colorful figures making their way on the pathways through the woods, to come together, dance, talk, party and have fun. These people were on a pilgrimage, and everyone there wore the look of a pilgrim who’d finally found a location where they really felt free.

Shaky Stage is a band that played “The Holler” a lot. Here’s how the band’s front man, Jeff Bunk, recalls his introduction to the place:

For months and months, my friend Tommy Dose had gone on and on about a tiki bar in the woods. It was owned by a man who looked like Santa Claus, who made wine in plastic buckets.

The whole place ran on solar power and they used an array of car batteries to host live music on Sundays. I had no intention of taking a two-hour ride early on a Sunday morning to go to a hippie hideaway in the woods. But here I was in the middle of nowhere walking down a dirt trail heading for a place called Pollywogg Holler. I had just come to an end of a long relationship and I was trying to find myself again. I decided I would let myself go, and “Do as the Romans do.”

The Holler turned out to be much less a tiki bar and something more akin to Rivendell. It was the vision of Bill Castle, who made a decision to share a simpler life with his family. Together they built beautiful log buildings adorned with intricate carvings and stained glass windows.

Fortunately for the rest of us, the Castle Family shared this vision with whoever was lucky enough to find themselves there. So there I am and I let myself go! I tried everything offered to me by the odd assortment of people I met. If I couldn’t find myself, I could certainly lose myself here.

The day was wonderful. I met professors and farmers, gun-toting good old boys, loggers, craftsmen, coaches, cooks, burnouts and Bible thumpers — all together to unwind and live and let live.

Before too long it was dark and it was time to leave. Tom and I made our way toward the road, but soon it became obvious that leaving was not an option. I was taken to a lean-to and tucked into bed with a small Mexican blanket that barely cut the chill of the cold late April night.

I drifted off to the sound of spring peepers and bellowing bullfrogs only to be awakened by the call of a confused rooster crowing at 3:30 on a Monday morning. I climbed out of bed to answer nature’s call, as I watered the rich soil below, small blue lights began to appear. I thought to myself, “must be fairies.”

At 5 a.m. I wandered around to find Tom. I woke him up explaining that it was Monday morning and I had to get to work.

As we drove home Tom was singing a Steve Goodman song about a mad Dutchman. I drifted in and out of consciousness as the Jeep rumbled below me. The ride was long and comforting. Before I knew it I arrived back at my car at Tom’s house. It was just before 7 a.m.  when Tom received a text message, then turned to me and said “Hey Bunk, I don’t have to got in to work today.”

Groggily, I drove to work, then slept in my car waiting for my workday to start. In my rearview mirror my face was locked in a thousand mile stare with a tired idiot’s grin. I punched the clock and thought: “I have to get back to those hills and that Holler.” 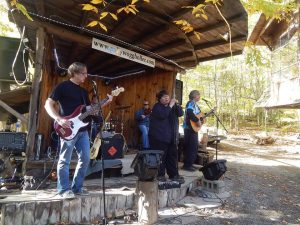 As the train rolls on past Rome toward Albany, I look out at all the miles and miles of woodland stretching out into the distance past gravel roads and electrical lines hanging from weathered wooden poles. Out where the buses don’t run. Where an old rail line runs parallel to the Erie Canal and the NYS Thruway, along a route that travelers have taken back and forth for centuries now. I’m headed to one of the brightest, loudest, fastest and most fascinating cities on Earth.

But I keep looking out the window, sort of wishing I could catch a glimpse of a secret location where people are slowly gathering, off the grid, to hang out in nature, make a little music and chill at a completely different pace.