When I was growing up, I had the great good fortune to live directly across the street from a small branch of the Buffalo & Erie County Public Library system. The first time I wrote my name in cursive was on my first library card. It was also a milestone because up to that point my mother or my sister or our next door neighbor Cele would charge out books for me.

When I was very young, Cele was my babysitter for a couple of hours everyday after school until my mom or an older sibling got home from work or school. She always had little crafty projects for me to do. And since the library was right there, reading was a very handy resource to feed a kid’s imagination in the days before cable TV, video games and the internet. Cele always had books for me to read in addition to all the stuff at school. I can still see her running her finger along the lines of the page as I’d read the words to the “Three Little Pigs” or whatever.

Cele’s small back yard was dominated by an enormous willow tree and she would sit back there in the shade with a book and read all summer long, sipping from a pretty little glass with delicately painted flowers on it, which she would periodically refill from a short bottle of Schlitz beer. I remember playing with her cat in all the fluffy seeds from the tree and looking at the bright red half moons left on the rim of her tiny glass by her bright red lipstick. Next to a stack of library books.

As I grew up, that library was my go-to place to quench my curiosity about all kinds of things. Whatever sport I was interested in I could learn about from a book. Soccer, basketball, tennis. I even managed to find a pioneering book about skateboarding that included a chapter on how to mount steel roller skate trucks to a wooden deck. Even when the books I found there were slightly out of date, I gobbled them up. 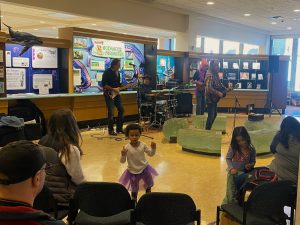 The Steam Donkeys inspire some young dancers. The show will be available on Youtube soon. Keep an eye on the SAM Foundation Facebook page to find out when it goes online. Photo by Bob McLennan

There was also a small room off the entrance lobby where they would periodically have other activities. Chairs would be set up and movies would be shown. A lot of silent films were screened there. Charlie Chaplin, Buster Keaton, Harold Lloyd. I was fascinated by the way everyone in the audience got sucked into the story just by watching what people were doing on the screen and reading a few intertitle cards with minimal bits of dialogue or expository information.

It wasn’t like on TV, where the characters were always talking and sometimes I couldn’t understand what was happening. Soap operas, for example, bored my young mind to no end. But if I could see a struggling damsel being tied to railroad tracks, I could see who the villain was. Everyone could see it! We all watched him despicably sneaking off. And when the hero raced there against all odds to untie her and pull her free just before the locomotive went barreling past, everyone in the little room felt the same relief. And everyone cheered when the villain was caught and received his comeuppance.

Even more rarely there would be a live person performing at this tiny venue in the library. Storytellers and folk singers would stop there occasionally. The first time I heard a 12-string guitar was there. It was inside a little library that I was introduced to so many things that I still hold dear in life.

So of course I was thrilled to play a gig with my band the Steam Donkeys at the downtown branch of the BECPL last Saturday afternoon as part of an ongoing series in partnership with the Sportsmen’s Americana Music Foundation. It’s a show we’d booked back in 2019, before COVID hit.

Credit goes to Bob McLennan of the SAM Foundation for working with BECPL Community Engagement Manager Anne Conable to pull this series together. The idea is to feature live music at an agreeable volume right there near the escalators and the Teddy Roosevelt reading room, by an arrangement of benches known as the Circle of Knowledge. I attended and enjoyed the first one of these events — which featured Ten Cent Howl — almost three years ago, before everything was shut down.

I’ve played a wide variety of venues over the years, from big concert halls to sidewalks. Once, in a small, crowded club, an older gentleman was dancing so energetically that his dentures flew out of his mouth and landed on the stage next to my feet. So I’ve seen a lot of stuff as a performer. And I will say it’s hard to top playing a tight set of original tunes to an audience that can hear what you’re singing about.

It’s the antithesis to playing a gig in a bar that doesn’t really cater to music. Too often in a bar like that you have patrons who’ve paid for a drink and are not in the mood to quiet down. For anyone. Got that? Yeah, I’m talking to you. Are you looking at me?

Of course, you can be unfortunate enough to have such a patron sit near you in a movie theater or a sporting event as well. You know what I’m describing. You get two personalities like this together and it can quickly and easily descend into fighting if you add enough alcohol to the proceedings.

But in a library? Sorry, no. That’s just not bound to happen. Especially on a Saturday afternoon.

People like this are fun to be around because they’re approaching life with a bit of wonder. In addition, you’re liable to find young children at the public library on a Saturday afternoon. At our show, we had a handful of some very young kids who were also among the most energetic dancers in town! I think they were surprised to see a band in the library. 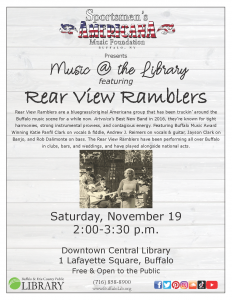 Just like I was surprised to look at them and see a young me once upon a time on a Saturday afternoon in a library.

If you haven’t already guessed, I’m building up to a very strong recommendation that you attend the next terrific show on the schedule for Saturday, Nov. 19, with the Rear View Ramblers. Featuring Katie Panfill Clark on vocals and fiddle, Andrew J. Reimers on vocals and guitar, Jayson Clark on banjo and Rob Dalimonte on bass — it’s the sort of lineup that will fit right in with the vibe.

I’ll come right out and say it. Like everything at the library, it was made to be checked out!