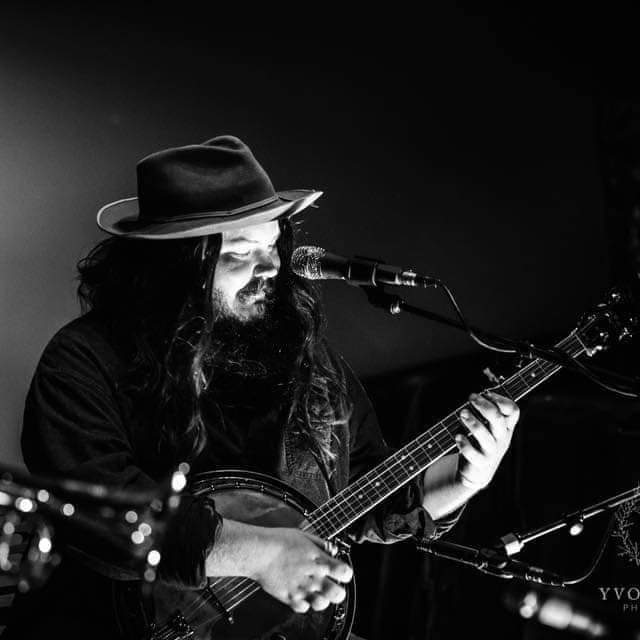 This month I caught up with Tyler Westcott, who, aside from being a fine multi-instrumentalist and singer in several noted local bands, is among the most friendly and enthusiastic musicians around. He took the time to respond to some questions recently, while he was out on the west coast.

Buck Quigley: When did you start playing music, and what were some of the earliest songs you learned? What was your first instrument?

Tyler Westcott: I started singing at a very young age. My mother taught me songs, hummed tunes while doing dishes, sang along to the radio. 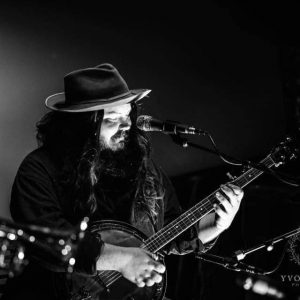 The first song I remember learning all the words to was Don McClean’s “American Pie.” I grew up on Bob Dylan, John Prine, Willie Nelson and the Grateful Dead.

I was in chorus, then later joined the band. So I would say my first instrument was my voice, then a recorder, piano or a trumpet.

BQ: I’ve heard you do a lot of tunes that come from a much earlier era. How did you get exposed to that stuff, and what is the appeal for you?

TW: I always loved Louis Armstrong. He just oozed pure joy and passion. He made a huge impact on me.

I started looking into the roots of the bands I grew up listening to. Bob Dylan early on copied Woody Guthrie. From him I found Leadbelly, Sonny Terry and Brownie McGee.

I had a friend in High School who got into punk rock. but he also liked country blues, Piedmont stuff, delta stuff, ragtime blues, etc. Once I heard Mississippi John Hurt and Reverend Gary Davis. there was no turning back. Then, the year I graduated, I went to New Orleans and absolutely fell in love with roots music. The appeal is the raw, pure, lo-fi, realness.

BQ: You play with a few different bands as well as solo. Can you give us a rundown of those acts, and tell us how you keep it all balanced?

TW: Folkfaces is my main band in which I write, sing, play guitar, banjo, harmonica and kazoo. What’s so fun about our group is that we can be chameleons. We are capable of playing a loud rock show but other times we’re a jugband. We mix it up with a variety of bluegrass, blues, 0ld-time, jazz, soul, punk, western swing and country. We tour as often as schedules allow and are working on our follow-up record (expect it this summer).

Every Wednesday (I miss a few here and there) for the last—I wanna say four years—I have held down a weekly Wednesday happy hour gig at Nietzsche’s. For the last two years or so, I’ve played as a duo with Brian Bauer of Dr. Jazz & the Jazzbugs fame. We play New Orleans jazz, vintage pop, Gypsy jazz, standards, jugband music.

I play in a nameless gypsy jazz group with Sean McNamara (of Mosswalk) and Patrick Jackson (sometimes augmented by a violinist). We play the music of Django Reinhardt and of Manouche artists.

I play solo quite often, drawing on a lot of my favorite songwriters, country blues artists and storytellers.

Google calendar helps me keep it together, color coded events for each group. Playing a lot keeps your chops up. I’m always learning and trying to be a better singer and musician.

BQ: You’ve been traveling quite a bit, playing music. What do you find to be most rewarding about that experience? What’s most challenging?

TW: I’m convinced that I have the best job in the world. I get to travel around doing what I love doing and sometimes people pay me to do it! I value my freedom and I am incredibly grateful that I can be creative and get by.

I love making new friends and seeing new places. Touring can make you appreciate home, your significant other and home cooked meals but I’m always excited to go out again. It can be tough keeping a van maintained and on the road. It sucks breaking down all the time. But bands’ vehicles have been breaking down for a long time. We’re paying our dues, and also getting good experiences and fodder for songs out of it. So if any sugar daddies are reading this and want to buy Folkfaces a van, let us know!

BQ: What on Earth made you want to put on a music festival, and could you tell us a little about FOLKFACES FEST?

TW: I wanted to have a gathering of music playing and loving friends. Years ago I had backyard parties where my friends’ bands played called “Livestock,” ’cause of the goats and chickens on the property. We had to change the name last minute because of copyright infringement this past year. 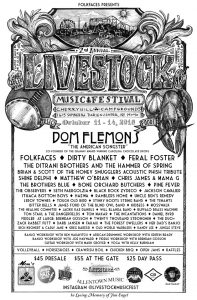 The original festival poster from 2018, before the name was changed from Lifestock.

I have always loved going to and playing at music festivals. There are always parts of festivals I don’t like, and I wanted to do it my own way. It was kind of for selfish reasons, really. I wanted to throw myself the birthday party I always wanted that no one else could or knew how to do. So I did.

Two years ago it was a free (donation-based) backyard crawfish boil party. We had “Baby Gramps” headline. I managed to convince a lot of friends I know in the music scene to donate their time for food and drink and gas money (which I understand is tough ’cause I play music for a living and need those paying gigs to pay for rent and groceries).

In 2018, it grew exponentially. We upgraded to a campsite (Cherryhill Campground in Darien, N.Y., across from Darien Lake amusement park). We charged for tickets. We had headliner Dom Flemons (co-founder of the Grammy award-winning Carolina Chocolate Drops) and 40 other bands.

It was an amazing weekend filled with incredible fireside jam sessions, happy people singing till the sun came up every night.

My friends and family helped me so much. It was a lot of work and I’m grateful for all the help we got. Looking forward to 2019. We learned a lot last year. We might rename it. Rebrand. Stay tuned, big things coming.

This year’s date is set for October 4-6 at the same location at Cherryhill Campground in Darien, lineup to be announced.

BQ: Let me give you a corporate interview-type question: Where do you see yourself in 10 years?

TW: Hopefully, touring the country regularly with a few more albums under my belt and accolades to my name. Playing the house concert and listening room circuit. Maybe doing some session work as a hired gun, or recording myself and my friends in a home studio.

Perhaps starting a venue/restaurant of my own. “Tenders all night Rock n’ Roll Diner,” or something like that … live music, breakfast all day or night, Greek/texas hots/’50s diner theme, good jukebox, beer, coffee.

Maybe I live in New Orleans and play on the street all day everyday. Wherever I end up, I hope to keep having fun and learning and creating.