By BUCK QUIGLEY
I’ve known Marty Boratin for over 30 years now, and I can tell you that everything you are about to read is the truth. I first met him at the legendary Death Ranch located at 33 (and a third) Dart Street near Buff State when he was cooking food and provoking merriment early into the morning on weekends, weekdays, what have you. All while working in the retail record business by day. I will argue that the legends are true about him, that he could take a little nap while standing up, beer in hand, before awaking refreshed and cooking up a wonderful meal for whatever touring band happened to be coming through town in need of a soulful place to crash.
Without further ado, here’s a little discourse we conducted via email as he was in the midst of doing what I’ve always known him to do: Cook something delicious for a bunch of folks on Mardi Gras, and get on with the music. … 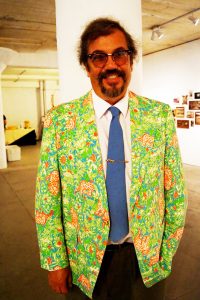 Marty Boratin, resplendent in one of his drab, ho-hum, boring coats.

BQ: You support and promote a wide variety of music. Can you talk a little bit about your appreciation of what’s come to be called Americana?

MB: I can remember my dad being a fan of the early ‘60s folk music revival, with people like the Kingston Trio and Peter, Paul and Mary, and earlier figures like Woody Guthrie, Pete Seeger, Burl Ives, Harry Belafonte and Odetta.

He was a high school history teacher, and I’m sure that the protest angle was something that attracted him to those acts. We always watched variety shows on television back then, and the Smothers Brothers Comedy Hour was a favorite of my dad’s.

I remember him talking about Pete Seeger’s performance of “Waist Deep in the Big Muddy” for weeks after. I have vague recollections of my parents watching the old Hootenanny variety show. And the Johnny Cash Show andt The Glen Campbell Goodtime Hour. And Hee-Haw. And occasionally listening to WXRL.

BQ: When did it start, and who are some of your favorite artists in the genre?

MB: My high school (St. Mary’s in Lancaster) had a 10-watt FM radio station, and I ended up as music director. Bob Dylan, The Band, the Byrds, the Dead, and the Allmans were in heavy rotation.

At UB I ended up as MD (Music Director) for WRUB, the carrier current station on campus. Discovered the Holy Modal Rounders and Michael Hurley. The “Have Moicy!” album is probably in my 10 most played albums list—little did I expect that Hurley would become a frequent houseguest decades later, and perform for 100 or so people in my front yard.

The old UB Folk Festival brought in some major folk and roots acts (and record vendors). Glam and punk were my main vinyl purchases in those days, but the more rootsy “pub rock” acts that straddled those two eras had me tracking down albums from the likes of Brinsley Schwarz and Chilli Willi & The Red Hot Peppers. I took several independent study courses from Gary Storm, who hosted the legendary late-night “Oil of Dog” radio show at WBFO back then.

I graduated with a degree in anthropology, but had a 20-year career detour in record retail, where ready access to virtually any record available exposed me to Texas songwriters like Townes Van Zandt, Guy Clark and the Lubbock scene with Jimmie Dale Gilmore, Joe Ely, Butch Hancock and Terry Allen.

BQ: What was the first show you worked in the capacity of a promoter? 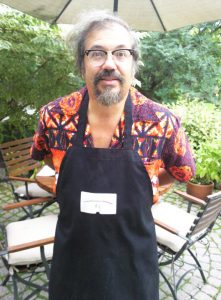 Marty Boratin in his natural habitat.

MB: We promoted a “punk” show for WRUB at UB’s Fillmore Room. (Billy Piranha and) the Enemies, Davy and the Crocketts, and The Tourists.

BQ: Why do you make the best gumbo?

BQ: What do you have to say about SXSW (the huge music festival in Austin)?

MB: I’ve been going since 1989 or 1990, and haven’t missed one since 1997. My old roommate Casino and I had been going to music industry events like the New Music Seminar and CMJ Music Marathon for a few years. We stopped going to those after our first SXSW, and he moved down to Austin the following year.

Everything and everyone were just so much more accessible. It was cheaper (way cheaper at the time), it was warm, everything was really close together, the food was great, and I had family to stay with. And being Austin, there was a heavy roots scene.

It’s gotten HUGE over the course of 30 years, very corporate in some ways, but there is still a strong independent vibe if you scratch the surface a bit.

There’s somewhere north of 2,000 official acts performing every year, and more than that performing at unofficial events. There are dozens of Americana focused parties and free events throughout the week where you can easily catch 20 acts a days for no charge, and usually without leaving a four-block radius.

BQ: Americanarama? (Here, I’m asking Marty about the homegrown music festivals that we used to put on in the late 20th—early 21st Century.)

MB: It was an amazing love-filled event. I’d love to see it happen again. East Mohawk Street is an easy street to get closed off for a day or two, although I’m not sure what outdoor production and staging costs would be these days.

Marty is this sort of person. He loves “to see things happen.” As long as I’ve known him, he’s been a catalyst to good times and good music. Many of you know Marty through his marriage to Susan Tanner. Of the many good friends and couples I’ve had the pleasure to know, theirs was such a sweet and genuine connection. We closed off our little email interview with this exchange. …

BQ: Lastly, and maybe most importantly, I don’t know how to phrase it. I wonder if you’d like to talk a little bit about Susan?

MB: I was amazingly lucky to find the woman that was the perfect match for me, and I suppose me for her. We were friends for years before we started dating and then got married.

She was a marketing rep for Universal Records (MCA, Geffen) in the ‘90s and would call me at New World Record where I worked at the time.

And then again when she worked at the Bottom Line Record Company (affiliated with the NYC venue).

We quickly became best friends when she moved to Buffalo for a job at Righteous Babe Records—a company I was pretty tight with to begin with.

She was one of the most dedicated music fans I could possibly know. Somebody that loved having 150 people on her front lawn for house shows like Peter Case (who she knew from back in her Universal days), or an intimate 40 for Freedy Johnston on an Easter Sunday.

We hosted a house show with Mark Eitzel only a few days before she went into the hospital for the last time.
I’m still really close with many of her music industry friends all across the continent.