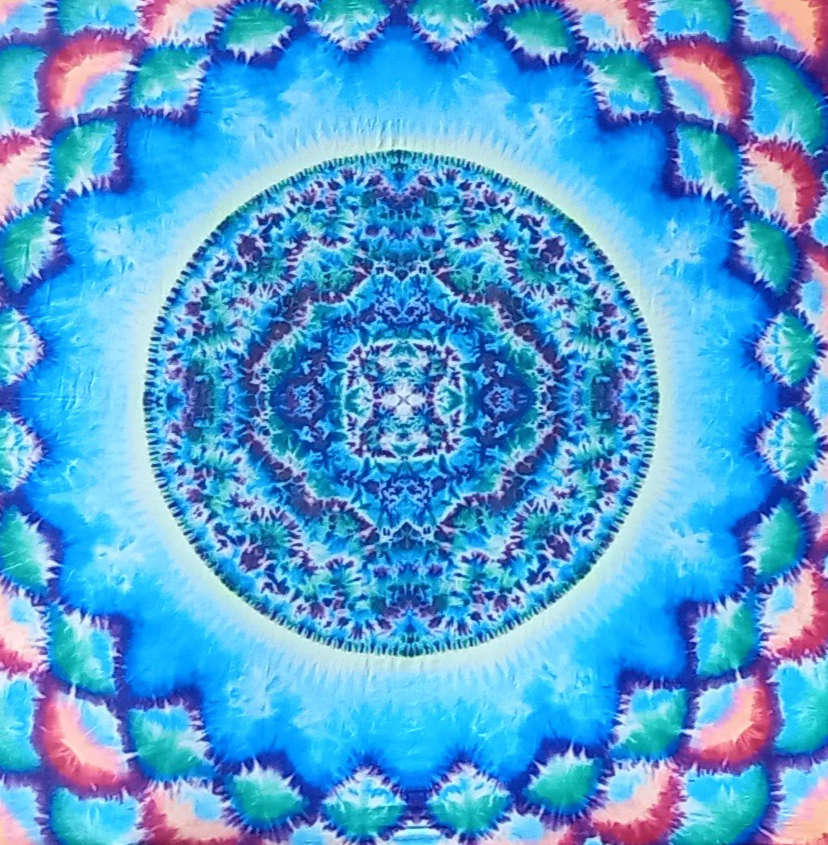 Buckwords: In Praise of the Compact Disc

On Saturday, Sept. 24, the Steam Donkeys held a CD release party for our new record entitled EARTHLINGS, at the Cave. We had a really good turnout—especially since we only announced it on Facebook beginning one week before the event. We’d like to extend a great big thank you to everyone who came out and made it a fun night.

I’d also like to extend our apologies to our friends the Goo Goo Dolls for booking our gig on the same night they were playing at KeyBank Center. We weren’t trying to steal your thunder, guys! We hope you had a good night as well.

Actually, Robby Takac of the Goos recorded and mixed the first track on the new CD. Historians of the Steam Donkeys will remember that Robby also recorded our very first five-song cassette SONGS FROM A STOLEN GUITAR in 1992 and COSMIC AMERICANA on compact disc in 1993.

We were all in elementary school at the time.

I wouldn’t say that the short promotion period for our CD release show was ideal, or even intentional. It was irrational, perhaps. For something that we started working on in January, one would think that we would have been spending much more time properly exploiting the grand event as it approached. But then, I think it might be helpful to remind you, dear reader, that the Steam Donkeys are unencumbered by the vast promotional budget and marketing team that would be attached to a major label act.

Our marketing department is run out of the same smart phone that I use to record demos of songs, take band photos, communicate with bookers and venues, send texts to bandmates, communicate with our graphic designer and CD production house, and so on and so forth.

Being such an indie act means that we have no budget other than what we ourselves put into it. And because we don’t have to pay back any advance that a label might have provided to us, there is no pressure to hit any production deadlines. We probably could have continued working on this record indefinitely. That’s an easy trap to fall into. We’ve recorded things that have never been released because we just never got around to it. Then lost interest. Then just plain lost the recordings. 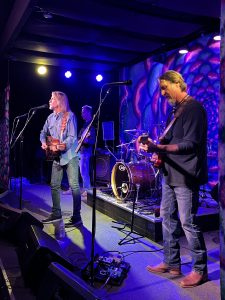 The Steam Donkeys at the Cave. Photo by Mark Wisz.

With the explosion in home recording technology over the past couple of decades, I have no doubt that the number of tunes recorded every year by bands and solo artists continues to skyrocket. And the number of streaming services on which to offer those songs has been expanding as well.

Many phones come with the Garage Band app now, so I’m sure there are artists out there who can record a track and then put it on YouTube that same day, using only the same smart phone they use to check the weather or receive a spam voicemail about their car’s warranty.

And if you only spend part of one day making a record on your phone, there really isn’t much to lose. Why not throw it against the wall and see if it sticks? Stranger things have become hits.

Being old school analog delinquents in this new school of digital everything, the Steam Donkeys are still geared to make records the old-fashioned way: Hanging out as a band and trying to get a good basic track. In our case, that means performing the song live together in the studio a couple of times with an eye toward getting a good basic drum, bass and, ideally, a rhythm guitar track.

Generally the lead and background vocals are added afterward, as are guitar solos and other overdubs like the 12-string electric guitar and in the case of this record’s title track–the theremin. If you don’t know what that is, please Google it.

The typical role of a “record producer” is to step in with a vision for what the band’s songs should sound like. Successful record producers often develop a sort of signature sound that they bring to any recording project. Phil Spector became famous for his skills in the studio and left his mark on the material of a vast array of artists from the Ronettes to the Beatles to Leonard Cohen and dozens more. 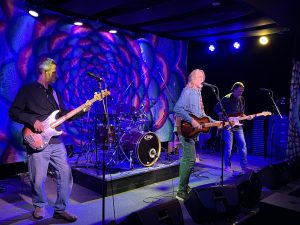 The Steam Donkeys at the Cave. Photo by Mark Wisz.

Chet Atkins left his mark on countless hits that came out of Nashville. Brian Eno, Daniel Lanois, Mutt Lange … love ‘em or hate ‘em, the list of producers who brought their unique sound to recordings goes on and on and stretches back through time to the dawn of the phonograph, really.

A typical record producer also keeps a project on task. But since the band produced this record, it meant we were our own boss. And nearly everything was accomplished by consensus. Add a guitar track? Sure. How about next Wednesday? More background vocals? Great. I’ll be back in town next Friday. What about Joe Mattimore’s schedule? Joe engineered most of the record, so we were dead in the water without him.

In between, we listened to rough mixes and brainstormed ideas. Then we’d get together in a top secret location where Mattimore would set up his laptop, speakers and microphone so we could add more sounds and mix them all together.

So eventually we got the songs sounding the way we wanted, but there was still the mastering to be done. We decided to add another track that we had recorded at GCR Audio with Robby Takac in 2019. The mastering was important in order to make all the songs sound like they belonged on the same record.

We went to Garrett Robinson, who recorded our last two albums — EVERCHANGING and FRAYED — at Mark Studios in Clarence. Garrett works out of the Hudson Valley now, but through the magic of Dropbox, there’s no delivery delay and that mastering process only took the amount of time he spent working on it, basically. It sounds great.

By this time, we realized that we actually did have a slim chance to wrap things up in time for this Sept. 24 date that we had booked at the Cave. The band hadn’t played there in quite some time, and we had initially decided to take the date because it happened to be on my birthday and I love to play. But a CD release party would be a cool thing, right?

Suddenly, it was the beginning of September and we had everything we needed to put out a CD! Except, well, artwork.

We went through several possibilities … everyone expressing their visions because, you see, it turns out that the Steam Donkeys are also visual artists as well as art critics. In sum, there is very little we don’t consider ourselves to be experts at — if only in our own minds. 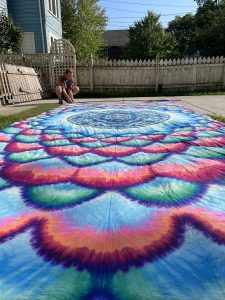 Mark Missert with his mural. Photo by Buck Quigley

Finally, the image for the cover appeared before our eyes in the form of a 10-foot by 30-foot, unique, mind-bending design entitled “Earth Lotus” by tie dye artists Mark and Mary Missert. I’ve known them since the late 1980s when they were on tour selling their wares at Grateful Dead shows and at their “Other Dyes” shop on Elmwood Avenue near the old Home of the Hits record store.

On Friday, Sept. 9, we watched as it was painted, pounded, and delicately unfolded in their backyard, taking up a big section of their driveway. Then came the tricky proposition of taking a photograph of the design in such a way that a detail of the huge artwork could be centered on a small CD case, and on the CDs themselves.

For that process it was put in the dryer and laboriously ironed by hand before being hung from a porch gutter and stretched across the entire front of the house. Hundreds of images were shot but none measured up to our collective exacting standards.

By this time, Mark Wisz had begun working on the layout for the artwork with some text and a selfie photo of the band that had some nice colors that complemented the colors of the cover artwork. Mark has been designing posters and CD artwork for the band for many years now. Among other things, he designs all of our comic book-themed reunion show posters.

But just over a week before the show, we had still not come to an agreement on which photograph of the cover image to use. One camp favored the symmetry of the design while another camp favored the bright colors. 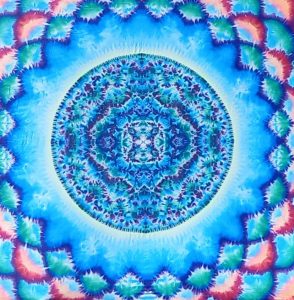 The cover to ‘Earthlings,” art by Mark Missert.

In the end, as with any great democracy, we were able to come to an agreement in the interest of the greater good. Symmetry prevailed.

Next step was to get the audio and art files out to Mark Records so they could start pressing them up. After a few hiccups involving the Dropbox files, everything was in place and we finally announced that we’d be releasing a CD in one week. Phew!

Every record has its own story. This is just the seventh Steam Donkeys record overall, but it’s the third one since 2017. Considering that we only managed to release four records in the early years between 1992 and 2003, and zero records between 2004 and 2016—the band’s creative output is at an all-time high right now.

Which leads me to share this anecdotal evidence about the state of the music business, from the point of view of an unsigned band.

Those are very big numbers for any local or regional act to hit. It reconfirms my conviction that buying a CD from an indie act is one of the best ways to show your support for their art.

It’s expensive to make a record for all the reasons I’ve stated in this column. Even when you get a screaming deal on studio time and you work with people who are willing to collaborate on the project for much less than they would normally charge (up to and including all the band members, who are in fact paying for the opportunity to do lots of hard work), making enough money to pay for the whole endeavor is incredibly challenging.

I stream music fairly often, especially for the convenience of referencing a particular song immediately. It’s a modern convenience. But if you think that your favorite streaming platform is compensating artists fairly, then I don’t know any gentle way to put it. You are very much mistaken.

Until we can fill the band fund with some cash again, we’ll be selling our new CD at our weekly Tuesday shows at Nietzsche’s and everywhere else we can imagine before we get around to releasing it on the internet somewhere down the line. We worked hard to make it the cool and rare record that it is, and early feedback from fans is that they really like it!

EARTHLINGS will also be available at the SAM Foundations Store at the Sportsmen’s Tavern starting Tuesday, Oct. 4.

That right there is really enough to make it all worthwhile. Thank you for listening. It means the world to us.

In addition to all the people I’ve named who worked on EARTHLINGS, I’d like to thank the members of the band: Dave Kimball on guitar, John Brady on drums, John Weber on bass. Thanks for your friendship and for all the patience, imagination and commitment you brought to making all these songs sound so good.

However, we’ve still got to bring home the bacon because we’ve already got a bunch of new material to record, and it ain’t gonna happen for free!