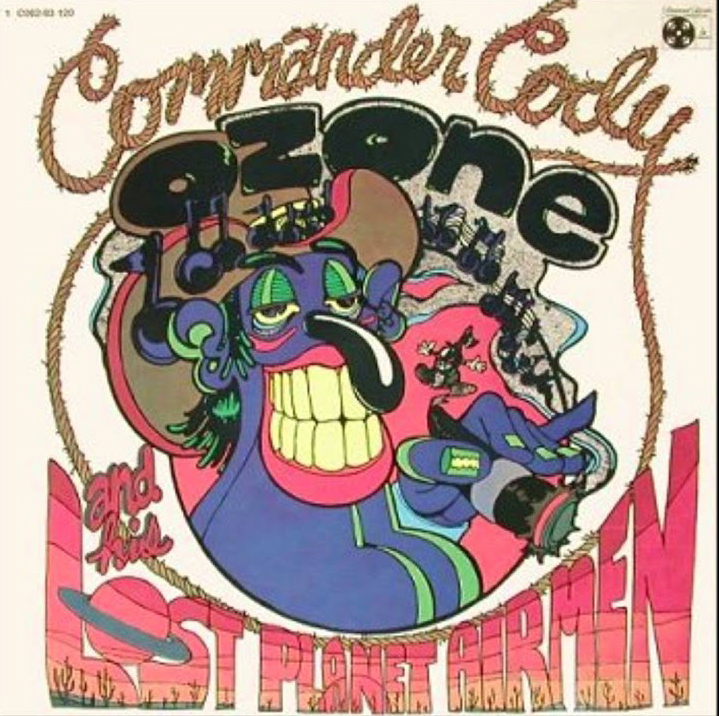 Buckwords: Getting Lost in the Ozone

George Frayne wasn’t what you would call a household name when he passed away last week at the age of 77. Still, many of you know him as Commander Cody. And if you don’t know who Commander Cody was, it’s likely that many of your favorite Americana artists do know who he was: An artist, musician, trailblazer and charismatic wild man.

His outfit, Commander Cody and the Lost Planet Airmen, stood out among the other iconic bands that were playing in music hotbeds of San Francisco and Austin in the late 60s-early 70s. They did it by mining the rich American traditions of boogie-woogie and western swing—energetic dance music that came into prominence in the 1920s-1930s.

The band was really a brilliant grab bag of influences, straight from the name, which was appropriated from a 1951 sci-fi flick. Like most pioneers, “The Commander” and his cohorts took what they came across on their cultural journeys and made it their own. The original meaning of the term “Americana” referred to artifacts and materials characteristic of U.S. culture. They appreciated Americana long before it became known as a musical genre.

Under this broad heading, comic books, records and sci-fi movies all ranked high on the entertainment scale for young people in the buildup to the rebellious youth movement of the late 1960s-1970s. The song for which they are best known was a cover of “Hot Rod Lincoln”—which was originally written and recorded in 1955 by an artist named Charley Ryan—telling the story of a hair-raising drag car race.

The lyrical punchline to “Hot Rod Lincoln” is a quote from the protagonist’s exasperated father, who, after bailing his offspring out of jail for racing in the street, makes the dire prediction: “Son, you’re gonna drive me to drinkin’ if you don’t stop driving that hot rod Lincoln.”

Looking back, it was a great cover song for its time. With the Vietnam War raging, there was a lot of tension rising between many fathers and sons. So, to resurrect a song from the previous generation and throw it right back at them was a pretty cool move. 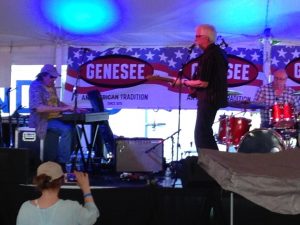 Cody (left) and Kirchen at the SAM Foundation’s Americanarama Fest in 2016. (Photo by Elmer Ploetz)

It’s a tune that celebrates lawbreaking, dangerous fun … all the elements that have been provoking parental conniptions since time immemorial. Is it stupid to drive so fast that the broken lines on the highway look just like dots? Yes. Is it normal for the telephone poles to be whizzing by so that they resemble a picket fence? No.

Having survived, does the experience bear retelling? Absolutely.

It’s in that spirit that I’ll tell you my George Frayne story. It doesn’t involve fast cars, but it does include marijuana—which back in the day was an illegal substance, if you can imagine.

It was back in the late 1990s and the Steam Donkeys were home in-between road trips when we had the opportunity to open for Commander Cody at Nietzsche’s. We were all thrilled because by this time we’d already opened for Bill Kirchen in Atlanta. Kirchen, for those who haven’t made the connection, was the original guitarist for the Lost Planet Airmen and has been a frequent visitor to the Sportsmen’s Tavern for many years. He blew us away that night with his skill as a guitarist and showman as well as his friendliness and encouragement.

So to have the chance to meet the Commander himself was going to be a real treat. I decided I would do something I never did very often, which was to roll a nice joint to share with him at the show. I’d gotten hold of what I felt was some really good weed so I cleaned it all up, sprinkled it in a rolling paper and twisted it into a plump torpedo shape. Then I put it in my jacket pocket and went to the show.

The band was at its tightest around this time. Constant gigging just does that to a band. We ended with our medley of train songs, which included everything from “Wabash Cannonball” to “Mystery Train” to “Chicken Train” to “Pinball Wizard.” And the kitchen sink.

That night we blew the freaking thing to pieces. It was like our James Brown on the TAMI Show moment. We just killed it and the audience went nuts.

By the time I’d made it through the crowd to the entrance to the staff stairway, there was the Commander, offering a handshake.

“You guys are great!” He smiled. “But you should OPEN with that medley, not CLOSE with it.”

We went upstairs to the little green room and met the rest of his band. As we were all talking, I decided it was time to break out the little treat I’d made for the occasion. When I produced the joint and handed it to him, he gave it a glance the way a jeweler might look at an interesting antique trinket.

So far, so good. I was about to get lost in the ozone with Commander Cody!

He lit one end and took the longest drag I’d ever seen a person take. Half the joint turned to ash. He held it in solemnly, and then exhaled slowly, letting the smoke curl up toward the ceiling. It was like being in the presence of an experienced sommelier who was noting the different qualities of a fine wine.

With that, I watched him inhale the second half of the joint in one toke. Just a pinch of paper, not even a roach, remained.

Still, it wound up being quite a party that included me being granted the honor of singing the first verse of “Seeds and Stems” with Commander Cody. In the spirit of the evening, I forgot the words. He glanced at me with a grimace, then a smile.

It all was too much fun, indeed.