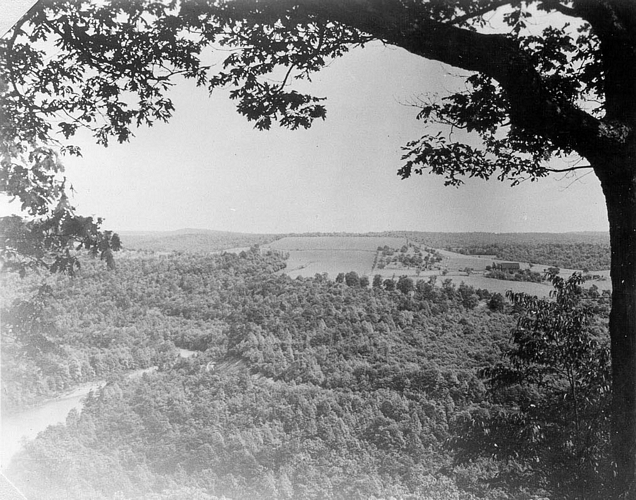 It’s only been through the luxury of time that I’ve been able to truly appreciate the role my father played in my musical life. Growing up the youngest of four siblings spread out over 17 years, I became aware early on that my parents were older than my friends’ folks. My Dad was 47 years older than me — almost to the day, since his birthday landed the day before mine.

Looking back, it’s to my shame that I remember feeling embarrassment when classmates would remark, in the mean, snotty way that only children can, that my parents were as old as their grandparents. My parents were also very attentive and involved, so there was little escaping them when I was very young. They were there at all school events.

Part of that doting could have been due to the fact that my Mom’s childhood was filled with sadness brought on by her parents’ divorce during the Great Depression — back when divorce was much more of a rarity than it is today. It was a mess. Both she and my aunt grew up in a long series of foster homes, usually separated from their parents and from one another.

This was in the hills of western Pennsylvania, where it was common for Depression-era families to collect chunks of coal that spilled off of train cars in order to bring them home to heat the frosty house. Poverty was profound and widespread. One chapter of family lore describes the milk cow that that my father’s family improbably owned. It was my father’s job to walk the cow up a hilltop behind the house before walking himself six miles to elementary school. The cow would graze all day until he returned at dinner time to walk it back to the small barn. 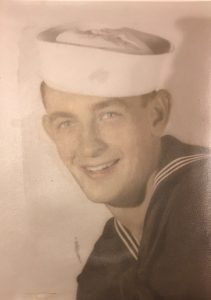 The first “Buck” Quigley, during his naval years.

By all accounts from my Mom and other relatives, my Dad loved that cow. He used to practice yodeling while hiking up and down the path through the woods with it. My mother would tell this story secretively to us kids — I suppose as a way to remind us that our sometimes stoic, ex-Naval officer father did in fact have deep feelings. Or maybe to remind us that we sometimes have to do things that are unpleasant.

It happened that one day during the Depression he came home from school and was told to go get the cow for the last time. She wasn’t producing much milk, and food had gotten so scarce that my grandparents decided it was time to butcher her in order to feed the family. According to the legend, my Dad did as he was told but he resented it and couldn’t bring himself to eat any of the meat.

I grew up hearing all kinds of firsthand stories about the suffering, struggles and deprivation my parents’ generation had to endure as children. Wealth was a state of existence available only to the tiniest sliver of the population. There was no middle class to speak of. The bulk of the population was left to glimpse at the finer things through the frames of black and white Little Orphan Annie comics.

One thing that always made my father’s eyes light up were his memories of playing music for people when he was young. He used to describe the events they would play as a teenager in the 1930s. These affairs seemed so sepia-toned and distant that I still have difficulty picturing them in full color. They were called cakewalks and they’d usually take place in someone’s barn or in a similar venue. I laughed the first time he told me about them. 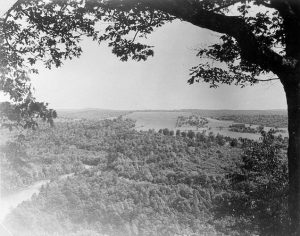 The band would consist of my Dad on guitar and a grab bag of other musicians — whoever had an instrument and knew how to play somewhat. Maybe a piano one week, a fiddle or accordion the next. Sometimes a guy playing a comb with waxed paper — a precursor of the kazoo. There was no amplification. On a good night, he would make enough money to buy a new set of steel strings that he could wear out at the next event.

The cakewalk was a dance party wherein the best dancers were literally awarded a cake as a prize. The term descended from formal processional dances practiced in the antebellum south by wealthy, slaveholding whites. Slaves quickly began mocking the formality of these timid, mannered displays with imaginative high-stepping dance moves of their own. By the early 1900s, Broadway shows were featuring cakewalk scenes just to showcase the lively dances. “Cakewalks” became a thing.

As a young man during the Depression, my father also hitchhiked and hopped trains in his early adulthood in search of farm labor work throughout the south as far as Florida, where he picked oranges and slept in the grove next to his guitar. Each year he applied for acceptance into the armed forces, but with no war going on, it was very difficult to be accepted as a private with no military school background. Simply unimaginable today.

One winter he came as close to musical stardom as he would ever get. He got wind of a radio station in Erie, Pa., that was looking for talent. He hopped on a coal train with his guitar and went up to that big city in search of his break. The station manager liked what he heard and put him on the air. His weekly on-air appearances continued for a couple of months until he showed up at the studio with a bad cold and a shot voice. When he opened his mouth to trill a fancy yodeling passage, nothing came out. On live radio.

But it should be remembered that at the time, music was just something a person did. There wasn’t galaxy of famous stars making mad money. People played music (outside of church) because other people enjoyed watching and listening to someone making music on an instrument. Try to imagine a time before widespread access to recorded music. When radio itself was still young, and radios themselves were not very portable. To hear something beautiful coaxed out of an inanimate object like a guitar — which itself was a rare thing to behold — must’ve appeared to be something as fascinating as a magic trick. Add a catchy tune with clever lyrics and you’re entering the realm of sorcery.

My Dad was accepted into the Navy in 1939, as war in Europe began to look more and more likely, but well before the draft was enacted. He brought his guitar along. Sure enough, just as it had done back in those coal country hills, it helped him make friends while stationed in Reykjavik, Iceland. It helped pass the time on the beach in Hawaii. And it survived the impact when a kamikaze plane crashed into the side of his boat but failed to sink it.

When I was around 12, I started getting interested in playing the guitar. My parents bought me an inexpensive model to see if my interest would go away, as it had for the recorder and then the saxophone. I practiced chords over and over by myself and then one day, out of the blue, my Dad took his guitar case from the back of a closet and sat down in a chair across from me. He opened it up, set the guitar on his knee and gave it a quick tuning.

His fingers went right to chord positions I’d never seen before. It was the first time I’d ever even heard him play. He taught me an old Woody Guthrie song called “Oklahoma Hills” and we played it over and over and over again. Both of us trying to sing the lyrics together. But I was a very shy singer.

Woody Guthrie wrote Oklahoma Hills, but his cousin, Jack, had the big hit with it in 1945.

So I would come home from high school and go into this small room in the little Cape Cod house I grew up in. It was big enough to hold a piano, a stereo, a guitar amplifier, a small TV and two chairs. There, I would put “Are You Experienced?” on the turntable, plug in my electric guitar and crank it up until the entire room buzzed like the ballast of a large neon sign.

Then I would drop the needle on “Foxy Lady” and try to mimic the huge swell of feedback that kicks off the song. I spent several months after school in that room, working on that as well as the dive-bomb noises that Hendrix effortlessly performed during his version of “The Star-Spangled Banner” at Woodstock. Maybe I’d throw in a 45-minute solo version of “Sunshine of Your Love” if I was feeling particularly expressive.

My father was a very patient man. He spent time standing on the deck of a destroyer in a hail of incoming fire, waiting to give the signal to let loose the torpedoes, drop depth charges and shoot cannons.

It took his teenage son’s Hellish guitar playing to finally make him crack. One day, as I emerged from my rehearsal space with ears ringing and fingertips sore, I walked into the kitchen where my father was sitting, looking off into the backyard.

“You know what, buddy?” he asked. “You look at these people who’ve become stars. Jimmie Rodgers. Bing Crosby. Frank Sinatra. Elvis Presley. Even Bob Dylan. It’s the singers. Playing guitar is fine but since you’re still figuring out what you want to do, I’m going to say you want to be the singer.”

In the short term, his suggestion made for a much quieter house. And he did have a valid point about singers getting the attention. I realized I could practice singing songs into a boom box in my room while strumming an acoustic guitar and then listen back to myself. It was a way to learn and improve more secretively. I could also mess around with making up songs of my own — songs with their own lyrics and melody. You obviously can’t do that if you don’t sing. This new focus offered many advantages.

In the long term, his suggestion in the kitchen that day set me in a direction that I’m still following 40 years later. In retrospect, I think my Dad remembered all the pleasure he’d had performing music as a young man. He’d learned that with practice, music could work like magic to transport people to a happier place in their hearts.

I am forever grateful he shared the secret of that magic with me.