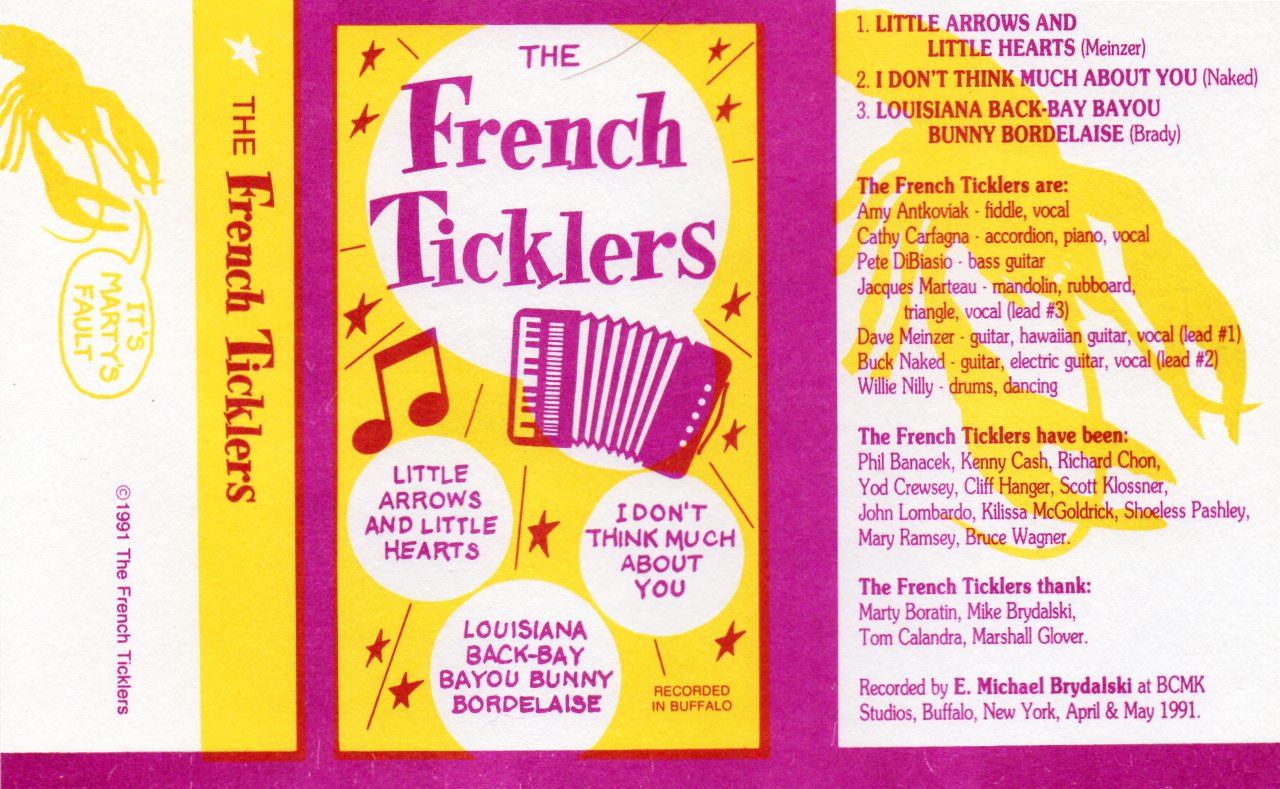 Credit the idea for this month’s column to Dave Meinzer. With Mardi Gras at our doorstep, he suggested shining a light on a Buffalo band that formed specifically for one such Fat Tuesday 33 years ago. Improbably, the group went on to play quite a number of gigs and even recorded and released a cassette of original material in 1991.

This is a brief history of the French Ticklers, according to a few people who were there.

Marty Boratin and Marshall Glover deserve most of the blame. That’s why I’m not even soliciting their input here. Glover was running his music club (called Marshall’s) and bringing in all sorts of cool touring acts to play on the long, narrow stage that ran parallel to the bar. So he and Marty cooked up this idea to have a big Mardi Gras party where Marty would be serving crawfish, jambalaya and gumbo. They’d have bags and bags of beads to give away. All they needed was a Louisiana-styled musical act to fill the bill.

Now, you have to understand that Fat Tuesday was really nothing in Buffalo at the time. This was well before alt.weekly ARTVOICE began staging its annual Mardi Gras celebrations complete with parade and festivities at all sorts of Allentown bars as a fundraising event. A decade before Tod Kniazuk began the Big Easy in Buffalo series.

Boratin is famous for keeping his Mardi Gras parties going at the Mohawk Place over the years, but this was back before that started — when he was still booking all kinds of indie acts at places like the Pipe Dragon and cooking for them as they came through town, crashing at the legendary Death Ranch. But that’s a whole ‘nother book … (Editor’s note: And also the start of why Marty should be considered for the Buffalo Music Hall of Fame!) 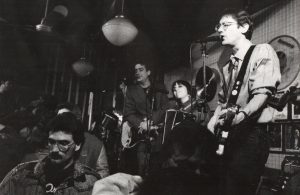 The French Ticklers at Marshall’s.

Anyway, it was out of the question to lure a genuine Louisiana act up to Buffalo to play at a smallish club like Marshall’s when those performers already had all the work they could handle at home during Mardi Gras season. So Marty floated the idea of putting a band together.

I had already experienced the crazy sort of parties that Marty and Marshall were capable of staging through my experience playing a Cinco de Mayo show with the Jacklords. I still meet people who talk about swallowing worms in the Mezcal that night.

If memory serves, Marty asked if I could get some members of the Sky Cabin Boys together to learn some Cajun tunes. After all, Kenny Kash was perhaps the only person in town playing a washboard at the time, so we were part way there. We also had Dave and Pete DiBiasio from the Dark Marbles playing drums and bass. Plus Scott Klossner from the Pluto Gang.

“The band needs a name,” Boratin remarked. I suggested the French Ticklers—which had a sorta Cajun ring to it, even if it was a term used to describe a novelty condom. It was an oddly charming name to see advertised at the Lancaster Opera House, but I’m getting way ahead of the story.

Richard Chon, who was by far the best musician to get mixed up in this adventure, came along and tried to take on the role of bandleader, thank God. He had dissected a few of the tunes so we began to learn some Professor Longhair, which Richard demonstrated to us on his violin. And after several stabs we also started landing in the groove of “Meet the Boys on the Battlefront” by the Wild Tchoupitoulas.

Many of you recognize Cathy Carfagna for the fine singer and musician that she is and you may have grown accustomed to seeing her playing accordion on occasion. How did she pick up that instrument?

“Knowing that I played keyboards, Marty called me up and said, ‘Hey, we’re putting together this party — if we got you an accordion, would you learn how to play it?’” Carfagna recalls.

“I said, ‘Sure, why not!?’  So he gave me this big creaky white accordion that he’d gotten at the Salvation Army for $25, and a cassette of Cajun and zydeco tunes. It all started from there.”

By Mardi Gras, the ragtag group was able to keep the music pumping well enough so that the party was a great success. Thanks largely to the great food, friendly venue, enthusiastic patrons, and unspeakable drink specials. It was also probably the first and last time “I Wanna Be Sedated” was ever performed with a bayou feel.

So, mission accomplished. We had a riotous Fat Tuesday party, complete with live band. And it might well have ended there. But, no.

“At some point during the summer of 1990 I had lunch with Cathy. Her boss at the Burchfield Art Center had heard something about the band she was participating in and asked if she could get them to play a Burchfield event in October. She told me the project was pretty informal and she wasn’t sure she if could pull it together herself or not. So I volunteered to help if she wanted.

“It took a couple of months to assemble a core of people who could show up for rehearsals and cover all of the parts but we got a six- or seven-piece group together not only in time to play the Burchfield party but, even before that, to travel to the Buffalo State College Camp in Franklinville for a Rural Madness party there.

“The foundation of the group was the DiBiasio brothers: Dave on drums and Pete on bass. They were skilled enough to get the Cajun Zydeco feel quickly and help pull arrangements together. I brought in John Brady to play percussion, which started out with whatever was handy but switched to Cajun triangle and Zydeco scrub board (frottoir) that we ordered from an authentic Louisiana fabricator. I still think we had the first two genuine frottoirs in Buffalo. John also played mandolin occasionally.”

What started as a whimsical one-off side project with no aspirations for ongoing success suddenly had what most local bands dream of — an abundant stream of fairly lucrative gigs based largely on word of mouth.

And, because we were no longer constrained with limiting the sound to Louisiana-based grooves, we were free to take a swipe at Tex-Mex, Western Swing, Country and all sorts of unexpected genres.

Dave Dibiasio recalls a perfect example of this, and introduces another member of the ever-changing band lineup…

“Fiddlemeister Doug Moody got it into his head that we should do a Herb Alpert song. We thought he was nuts. None of us knew the song except Doug, as far as I remember. To teach us the song, he whipped out a TRUMPET, surprising us all, and played the main horn riff for us to follow. I didn’t know that he played the trumpet! We learned that song, an instrumental called ‘Peanuts,’ and it became part of our set after that. Doug was amazing! So were the French Ticklers!” 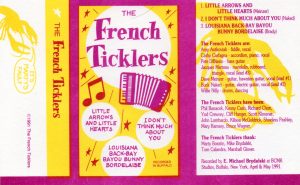 In 1991, the band recorded three original songs at the old BCMK studio on Delaware Avenue near Hertel. The release prompted favorable reviews from the Buffalo News and from (now defunct folk/world beat magazine) Dirty Linen.

During its short existence the band would play the Tralf, Nietzsche’s, the Lafayette Taproom, the Icon, the Connecticut Street Armory, the Little Harlem Hotel, the Lancaster Opera House and Lafayette Square among other impressive local venues. Throw in parties and weddings, and you had a lot of commitments.

Ultimately, it was probably all the commitments that led to the band’s undoing. It was, after all, a side project. Every member was playing in other bands. It was after an early French Ticklers rehearsal that John Brady and I stopped at Anacone’s on Bailey Avenue to listen to the juke box and drink beer while kicking around the idea of a band that would soon become the Steam Donkeys.

So, I’d like to thank Dave Meinzer for suggesting this brief stroll down memory lane in honor of Mardi Gras. And I’d like to thank Marty Boratin and Marshall Glover for creating the need for a band to play at a Fat Tuesday party in Buffalo, N.Y., all those years ago.

I look back at it now as a fine example of letting the good times roll.