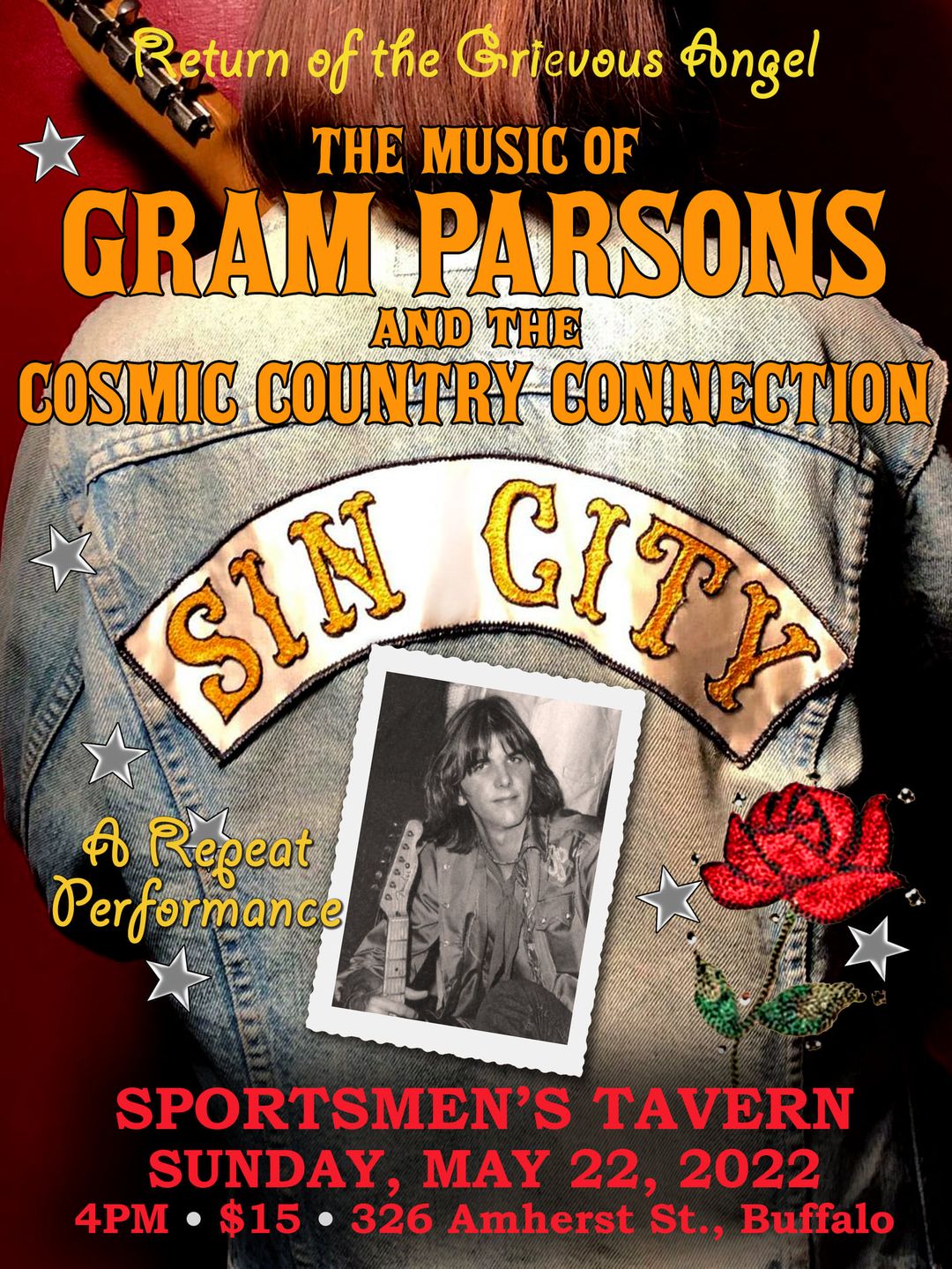 On Sunday, May 22, the Sportsmen’s Tavern will host an encore tribute to Ingram Cecil Connor III, the enigmatic musician known as Gram Parsons.

Before his untimely death in 1973 at the age of 26, Parsons recorded an influential body of work with the International Submarine Band, the Byrds, and the Flying Burrito Brothers before releasing two solo albums that introduced the world to Emmylou Harris.

He was born on Nov. 5, 1946. His grandfather on his mother’s side of the family was a citrus tycoon who owned orange groves and extensive real estate in Winter Haven, Florida, and Waycross, Georgia. Thus he was born into a life of white southern privilege. But if money can in fact buy happiness, there was evidently not enough of it to afford a happy childhood.

Plagued by depression and alcoholism, his father (a WWII flying ace) took his own life two days before Christmas in 1958, shortly after Gram’s 12th birthday. His mother remarried a man named Robert Parsons. Gram and his younger sister Avis adopted his surname, but the family could not escape sadness. His new father’s marital infidelity exacerbated his mother’s heavy drinking and she died of cirrhosis on the same day Gram graduated from high school.

As it does for many young people in emotional distress, music became a solace and a refuge. And like another Florida-born rock star — Tom Petty — it was an early exposure to a live performance by Elvis Presley that steered them both toward music as an escape from troubles and a path forward in life.

After some success with a high school-aged folk group called the Shilohs, who were in the mold of the Kingston Trio and the Journeymen, Parsons was accepted into Harvard University in 1966, largely on the strength of his application essay since his grades were sub-par. In typical fashion, he spent just one semester there. But it was also during this time in Boston that he discovered the music of Merle Haggard.

It was there he also formed the International Submarine Band with members of the local Boston music scene. That band wound up relocating to Los Angeles where they recorded “Safe at Home,” an album that was only released after the band had dissolved. Many people point to it now as a seminal example of country rock.

In Los Angeles, Parsons came to the attention of Byrds member Chris Hillman. When Parsons “joined” the Byrds (he was only paid as a hired sideman) he nonetheless steered the content of their next record “Sweetheart of the Rodeo” to accentuate country music.

Whereas the Byrds had theretofore electrified folk music with hits like “Turn, Turn, Turn” and floated “Eight Miles High” through the psychedelic stratosphere, exploring country music was like visiting a different country altogether.

Bob Dylan had recorded the albums “Blonde on Blonde” in 1966 and “John Wesley Harding” in 1967 in Nashville, but neither of them sounded much like country music.

How was their reception in town? Conservative Nashville famously booed the hippie-looking Byrds right off the stage at the Ryman Auditorium — home of the Grand ‘Ol Opry.

During the Vietnam War era, mixing long-haired rock and crew cut country together was like burning an American flag at a VFW Post. The times they weren’t a’changing in the middle of Tennessee.

“Sweetheart of the Rodeo” only reached #77 on the Billboard Top LP Chart of 1968, so the case can also be made that fans of the jangly, hippie-like 12-string Byrds sound had not been clamoring for more pedal steel in the mix.

In any case, Parsons had already left the band by then in order to hang out with the Rolling Stones in the south of France — which is the kind of thing you can do in your early twenties when you’re an heir to a citrus fortune. And it was during that time that the Stones broadened their embrace of American music beyond the blues, rock ‘n’ roll and R&B to include country. Especially the grittier, stripped-down country music coming out of Bakersfield from artists like Buck Owens and Merle Haggard. You can hear Parsons’ influence on songs like “Country Honk” and “Far Away Eyes” among others.

The next chapters in Parsons’s story include his time with the Flying Burrito Brothers, who continued to blend country music aspects with rock as well as R&B with covers like “At the Dark End of the Street.”

Visually, they were the first rockers to adopt the outlandish stage wear designed by Nudie Cohn, whose colorful rhinestone-encrusted creations had become synonymous with Nashville stars like Porter Wagoner. Of course, Wagoner’s wardrobe didn’t include embroidered cannabis leaves on the lapels.

It was not enough to push the band through to mainstream success.

In 1972, Parsons recorded “GP,” the first of two solo records featuring the TCB band — which was arguably the tightest lineup of musicians around at the time, serving as the live band for Elvis Presley’s high energy Las Vegas shows of the era. With Emmylou Harris lending her haunting harmonies, the young singers formed a pair reminiscent of George Jones and Tammy Wynette for the counterculture set. Their cover of the Everly Brothers’ “Sleepless Nights” on the posthumous 1976 release of the same name is as full of heartbreak and yearning as anything you’ll ever hear.

None of it made a dent on the country or pop music charts.

On September 19, 1973, Gram Parsons died from an overdose of alcohol and morphine at the Joshua Tree Inn in the high desert above Los Angeles. One of the most outrageous true stories in the history of rock is the ensuing theft of his body at the L.A. airport and subsequent nighttime transport back to the Joshua Tree Monument for an improvised cremation that left charred, smoking remains by sunrise.

Taken collectively, the circumstances of Parsons’ life and death are so strange and unique that it’s easy to see why his legend continues to grow. What he never achieved in real, commercial success only adds to the bizarre cult status that at times overshadows the music.

Yet after all the shocking and grotesque circumstances of his life are stripped away, it’s the music Parsons left behind that continues to touch and inspire so many artists.

Those who are already fans as well as those who’ve never heard of Gram Parsons will be sure to enjoy this heartfelt salute from a long list of local musicians gathered to sing his praises.