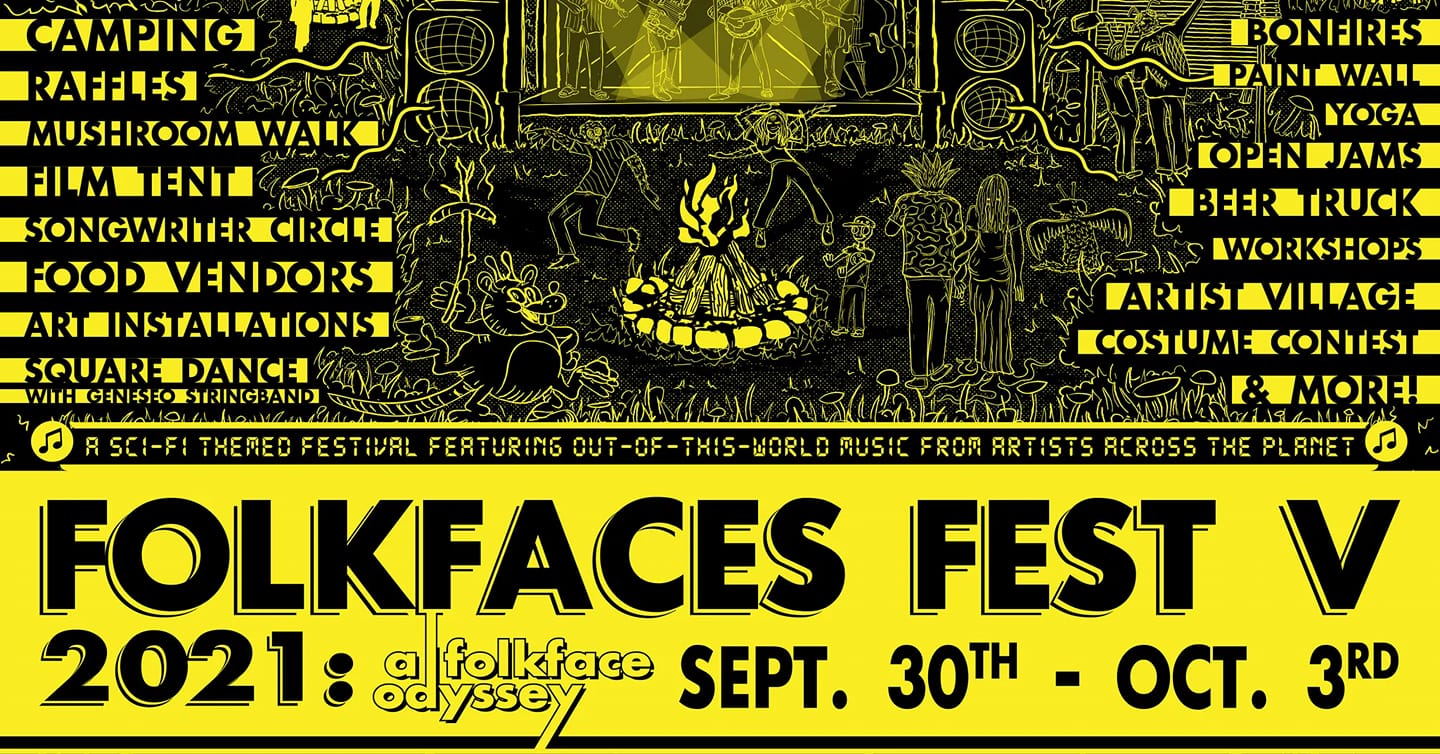 Buckwords: Before the Fall … Catching up with Tyler Westcott

Here we are on the cusp of Labor Day, 2021. The daylight is becoming shorter. The mornings and evenings are becoming cooler. Summer is just beginning her long goodbye.

But as she starts making her way through the crowd on her way out the door, sharing pleasantries and bidding farewell in a heavy perfume of sunscreen and barbecue, I’m looking forward to greeting Autumn. She’s just arriving at the party and already starting to change the vibe from the heat and sweat of summer to the brisk, dewy mornings and crunchy colors of fall. I’m glad I don’t have to pick a favorite season, but if I did, I’d have to say that harvest time has a lot going for it.

Tyler Westcott also has a lot going on these days. Let’s take a few minutes to catch up with the Folkfaces frontman …

You unfortunately had an intimate experience with COVID. What was that like and how are you feeling now?

I did indeed. It knocked me out pretty good! I was going around saying it was a mild case and I didn’t have it too bad and downplaying it … until a friend said to me, “Tyler, if it kicked your ass, then just say it kicked your ass,” and he was right because, yeah, it did. Lost sense of smell and taste. Sweet and salty was all I could do. Body aches. Dizziness. My eyeballs hurt. General fatigue. I was just exhausted and wiped out. Headaches for a few weeks and stayed for a while after initial symptoms. All the common flu-like symptoms as well: cough, sore throat, etc. I didn’t have any breathing issues, but some close friends did. That was scary. Stayed home for 10 days. Didn’t drink or smoke. I’m grateful to my mom, who dropped off some groceries. Feeling fine now. Got the vaccine back in March. Had no side effects whatsoever.

Tell us about this year’s Folkfaces Fest. Who’s on the bill? What can people expect? 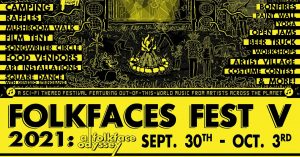 This year is our 5th annual Folkfaces Fest. This year we have a science-fiction theme. “Folkfaces Fest V—2021: A Folkface Odyssey.” Riffing on Stanley Kubrick’s “2001: A Space Odyssey” … Remember the mysterious monoliths that kept appearing a little over a year or so ago?! Yeah, maybe not … lots has happened since then. This year we are thrilled to host talent from near and far.

We’ve got Austin, Texas-based “the dirty old one-man band” Scott H. Biram headlining. Also, Kentucky Colonel J.D. Wilkes, a skilled old-time banjoist and virtuosic harmonica player … Frontman of the southern gothic band The Legendary Shack Shakers. He’s also a published author and accomplished artist. We also have Hudson Valley-based old time music hero Bruce Molsky performing for us as well as giving a workshop at the fest. Ragtime Blues guitar wizard Andy Cohen also will perform and give a workshop. Our pal “Uncle” Mike Gantzer (of Aqueous) will perform a rare solo set! Apocalyptic string band the Ditrani Brothers will return to the fest this year. Our pals Dirty Blanket will be there serving up a hefty portion of Finger Lakes bluegrass! Two sets from Folkfaces as well.

As far as what people should expect goes, I was hoping to get back to something similar to 2019’s festival. Three stages, lots of activities, vendors, artists, etc. People should expect that we will be following all CDC and health department regulations for large events.

When I was planning this year I was hoping that the world would be in a much better place. We highly encouraged all attendees, staff, musicians, volunteers (everyone) to get vaccinated so we can safely enjoy this event together. Or produce a negative test within 72 hours. Mask up when you cannot maintain social distancing. There is so much space to spread out at the campground. All the stages are outdoors. We had a much smaller socially distant event last year. I’m proud to say no one got sick. With restrictions changed, we are expecting more people but planning to keep our protocols going from last year’s event regarding distancing and sanitation.

I see you have a new touring vehicle. Tell us about it.

I was scouring Facebook marketplace and used car lots all across western New York for months. Came across quite a few rust buckets. Dan Schwach and I were on the hunt about two weeks before we were supposed to leave for tour. We were about to call it a day when I put up a Hail Mary Facebook post and somebody commented a lead. We went and checked it out. After searching high and low and having two vans sold out from underneath us, we found something four minutes from my house. We were planning to drive to Cleveland to look at something that morning. 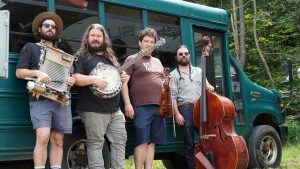 We found an E-350 Ford short bus! Had an auto-savvy friend come along and check it out. He gave it a thumbs up. It came from Yonkers where they put less salt on the roads so it wasn’t too rusty. Plus schools maintain their vehicles well. Even though the mileage was a little high I figured once it dies I could park it somewhere and turn it into a little house. After a bit of a DMV nightmare which gave me some Arlo Guthrie-esque song fodder, I got it registered, insured and street legal!

We scraped all the school decals off, took out a few seats and put in a bed, took off the stop sign, changed the oil, got a new battery. It was a terribly rainy summer so finding the right time to paint it was tough. Big shout out to my friend Jeremiah; that guy is amazing. Couldn’t have done it without him. We painted it the morning of the day we left for tour. It was still drying as we hurtled towards Syracuse for the first show of a 12-day run. We painted it “Country Squire” (dark green). We had a few flat tires but it was smooth sailing otherwise. After all the car trouble we’ve had over the years, it was pretty cushy. “Bussie Smith” runs like a champ! It sure is nice to be able to stand up while in motion and stretch the ol’ legs. Lotsa of room for stuff too.

What kind of recording projects have you been working on? How can people hear them?

I recorded a solo record over the last year at Black Rock EPS with Jay Hall. All originals. All instruments played by me. I released one song so far, “When Lockdown Lifts.” It’s only on bandcamp.com. I plan to release a limited number of four-song EPs called “Pandemic Summer” very soon on plastic records and CD. The full-length release to follow!

I started playing bass with a new band last year called the Kathryn Koch Band. Kathryn and I met playing in Black Rock Zydeco. She’s a wonderful songwriter and friend. I’m so thrilled to be playing bass in a project! We’ve only played three live shows so far. But we just went into GCR audio for a few days and recorded with Justin Rose and Alan Whitney and made a record of all-original music. My friend Sean McNamara (is) on guitar, and Jeff Schaller on drums. When it is available, it will come out on vinyl and digital download through Kathryn’s website. Folkfaces are planning on going into the studio this fall to make our third studio album!

You can find out more about this year’s Folkfaces Fest, scheduled for Sept. 30-Oct. 3 at Cherry Hill Campground in Darien Center by visiting here: https://www.folkfacesmusic.com/livestock-music-festival

While you’re at it, enjoy Westcott’s whimsically energetic new tune “When Lockdown Lifts” by  here: