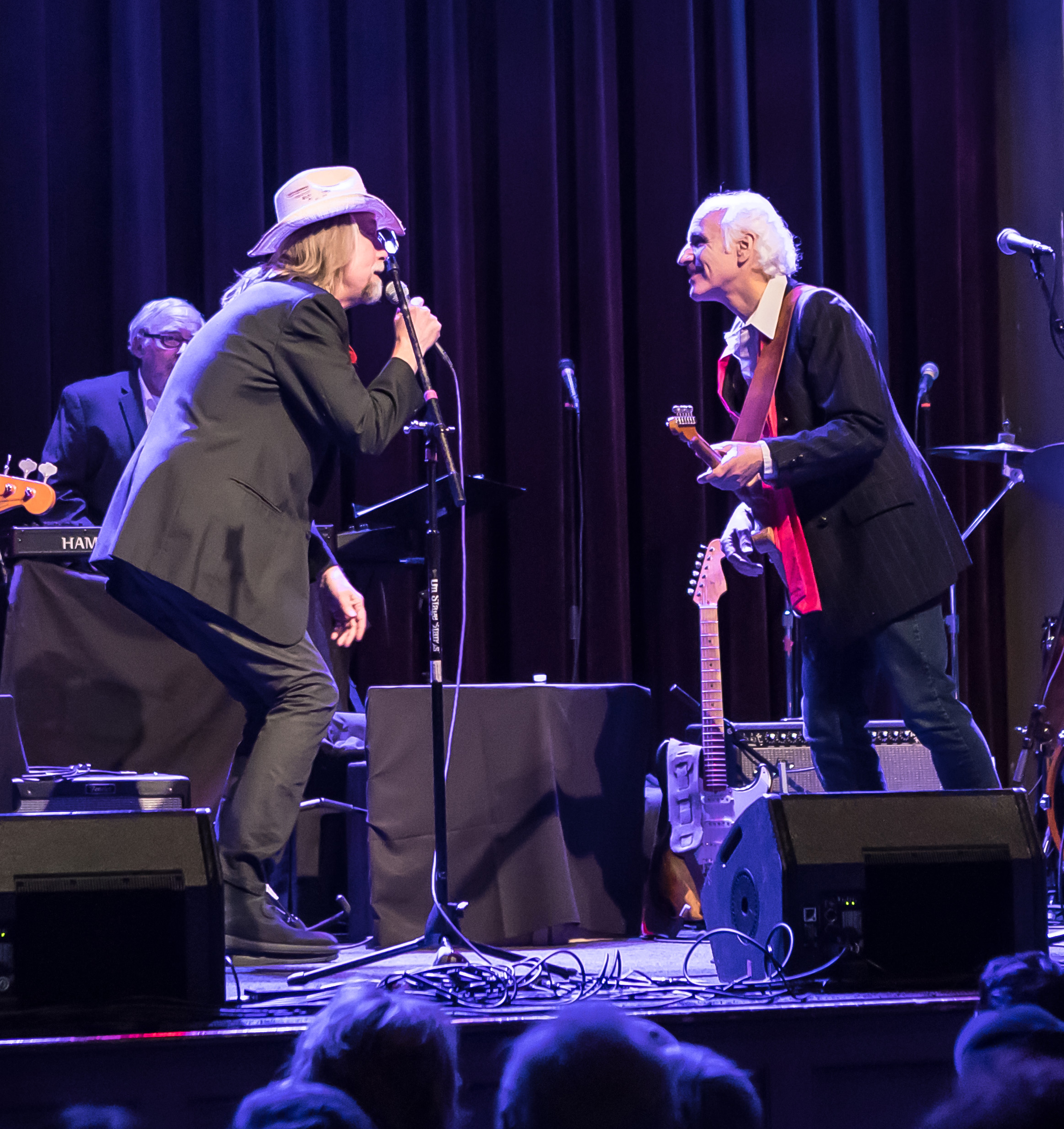 Buckwords: A Look back at the Last Waltz III

The third annual live production of The Band’s final concert, which was captured by Martin Scorsese in the classic rock documentary “The Last Waltz,” took place on Friday, Nov. 22, at Babeville. Like the previous two years, the venue was sold out and packed with music lovers eager to experience the show performed by great local musicians in the grand venue of the repurposed church on Delaware Avenue. The event benefits the Sportsmen’s Americana Music Foundation.

I’m proud to have been a part of the whole endeavor for a third year now, turning in my role as Ronnie “The Hawk” Hawkins—the rockabilly artist who first put together the Canadian musicians (with the exception of Levon Helm) then known as the Hawks—who went on to become known as The Band.

It’s a complex production that gets pulled together with only one full-cast rehearsal the night before. The key to its success is the rock-solid performance by the core members: Doug Yeomans as Robbie Robertson, Pete Holguin as Levon Helm, Jim Whitford as Rick Danko, Ron Davis as Garth Hudson, and Jim Ehinger as Richard Manuel. These guys are the glue that holds the whole night together. And there’s a lot to hold together!

Over two dozen other performers join in through the course of the evening. This being the third year, I can tell you it’s true that everyone involved looks forward to it as a kind of reunion now. Even though we’re all busy with our various other gigs throughout the year, both the rehearsal and the show have taken on a kind of folksy homecoming backstage, which is totally in keeping with the Thanksgiving season. 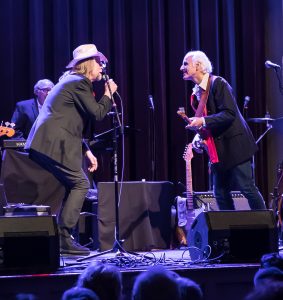 Buck and Doug Yeomans face off during “Who Do You Love.”

A really nice addition to this year’s show was the use of live streaming to make the sold-out event accessible to those who couldn’t get a ticket. No, it’s not the same as being there in the flesh, but you can still check it out at buffalo.fm. At minimum, it should whet your appetite for next year’s performance. It’s not an event to procrastinate on buying your tickets. One attendee told me during intermission that bootleg tix for this year’s show were fetching up to $200.

Guest performers included Tom Makar doing an inspired reading from the Chaucer’s Canterbury Tales a la Michael McClure in the original film. While I struggle to remember the lyrics to one song, Makar brings life to a whole speech written in Middle English.

Dan DeLano on piano turns in a rollicking version of Dr. John’s “Such a Night,” complete with the horn section of Matt Harris, Joe Parisi, Al Jaenecki and Harry Fackelman, who also bring that big, brassy sound to classics like “The Night They Drove Old Dixie Down.”

Jerry Hall is the embodiment of Neil Young on “Helpless.” “The Weight” takes on an added gospel flavor courtesy of Joyce Wilson Nixon, Erinn Benning, Rod Nickson and Alex McArthur doing a great rendition of the Staples Singers’ harmonies. The Brothers Blue (Charlie Coughlin, Matt Sperber and Ben Haravitch) then serve up a fine, homespun version of “Old Time Religion.”

Michael McGuire does an uncanny take on Neil Diamond, singing “Dry Your Eyes.” Joni Mitchell could not be in better hands than those of Leah Zicari, who flawlessly plays the jazzy chords on her guitar while soaring through the lyrics of “Coyote.”

Blowing his heart out on the harmonica, Ted Cacciatore breathes all kinds of life into “Mystery Train.” Next, Eric Crittenden tears up the Muddy Waters classic “Mannish Boy,” followed by a bonus version of “Caledonia.”

After Frank Grizanti steps up to deliver his masterful cover of Eric Clapton’s take on “Further On Up the Road” and Joelle Labert effortlessly channels Emmylou Harris on “Evangeline,” it’s time for Mark Norris to steal the show with his energetic rendition of Van Morrison’s “Caravan.”

Kevin Cox is always entertaining offering up Lawrence Ferlinghetti’s “Loud Prayer,” capturing the biting sarcasm of the famous beat poet. Bill Smith then begins the denouement of the evening with his spot-on take on Bob Dylan’s “Forever Young” and “Baby Let Me Follow You Down.” The entire cast curtain call sing-along to “I Shall Be Released” seems to be just the cathartic thing you want in a live performance, as I always see audience members joining in on the choruses.

Great credit is also due to Phil Knoerzer, whose narration strings the evening together, and – as Buffalo Bob said in his column – many thanks go to Babeville Manager Anna Kapechuk, sound by Jesse Rejewski, lighting by Kenny Maggs, posters by Jerry Hall, program editing by Elmer Ploetz and photography by Paul Panzarella.

Special thanks go to Robert McLennan with the SAM Foundation and Doug Yeomans for dreaming up this wonderful event, which has grown into a holiday tradition.

See you next year!