By Elmer Ploetz November 2, 2019 No Comments

The venerable old Black Rock bar has gone through such mind-boggling changes over the last decade that it’s nearly impossible to describe them to a newcomer. With the addition of the outdoor Sportsmen’s Park this summer, and the acquisition of The Cave—another top-notch music venue situated behind the Sportsmen’s complex, on Military Road—one thing must be acknowledged about the Hall family: They don’t seem to sleep much, but good God, they manage to dream big! 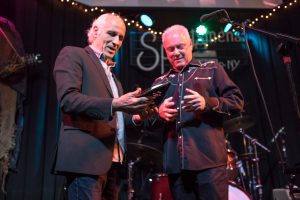 The SAM Foundation is among those dreams that have become a reality. From the not-for-profit’s Mission Statement: “To foster, promote and expand community appreciation for Americana music from Buffalo and Western New York through the production and sponsorship of performance and broadcast events and presentation of seminars and workshops on Americana music.”

The annual awards night, along with this newsletter you are reading, are just a couple of ways the Foundation is following through on its mission.

It was a packed house at 5 p.m. on a Sunday evening, with appreciative musicians and Americana music lovers mingling, partying and chatting.

Festivities kicked off with a few words from SAM Foundation Board President Bob McLennan, who has been a tireless and enthusiastic booster for Americana music in our area. He introduced the house band for the evening, the Skiffingtons, which was an amalgamation of the Skiffle Minstrels and the Kensingtons—who were co-winners in the Best Band Category at last year’s awards show.

Awards are bestowed for Best Male Performer, Best Female Performer and Band of the Year. These winners are determined by an online voting process wherein all current members of the SAM Foundation are free to let their voices be heard. David M. Miller, Ben Westlund and Elton Lammie were this year’s nominees in the Best Male Performer category; Grace Lougen, Cathy Carfagna and Grace Stumberg for Best Female Performer; Leroy Townes, Uncle Ben’s Remedy, Freightrain, Folk Faces and my band, the Steam Donkeys, were the nominees for Band of the Year. 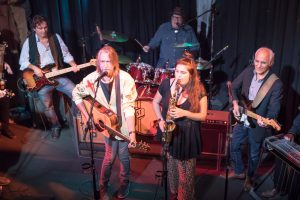 A once-in-a-lifetime combination of musicians on “Hey Good Lookin.'” (Photo by Paul Panzarella)

I was looking forward to singing the old Hank Williams tune “Hey, Good Lookin’,” backed by members of my band, as well as members of the Skiffle Minstrels and Folk Faces, who are among my favorite players in town. I was very pleased with the unrehearsed performance we pulled off, especially when you consider that Doug Yeomans had the presence of mind to ask, as the song was being counted in: “What key?” It wound up being a pretty bouncy, joyful version of the old country chestnut—which goes to show how a timeless tune can serve as a playground for great musicians.

I also need to mention the other awards that were given out at the show. The SAM Foundation Member of the Year Award went to Norm and Thuy Murray. Norm gave a very touching and heartfelt acceptance speech when presented with the plaque by Founder and original Chairman of the Board Dwane Hall.

The Bill Kirchen Pioneer Award went to guitarist, singer, songwriter, bandleader and all-around solid guy Doug Yeomans. It was an outstanding recognition for an incredibly talented and hard-working musician who’s been performing this kind of music for over four decades.

The Educator of the Year Award went to Mark Panfil, a fabulous musician and champion of bluegrass music. I had the privilege of writing up a little profile on Mark and his brother Chris upon their induction into the Buffalo Music Hall of Fame a few years ago. Having admired Mark as a musician for many years, I was doubly impressed to learn of his work as an educator at schools and summer bluegrass camps. His award that night was truly a fitting honor.

Best Male Performer went to David M. Miller, whose skill as a guitarist/singer/songwriter puts him in a zone all his own in the realm of bluesy Americana. By tirelessly performing regionally and nationally, he walks the walk. A more deserving honoree is hard to imagine. 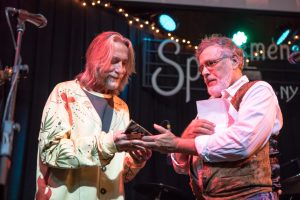 Grace Lougen won the Best Female Performer in recognition of her fiery mastery of the guitar and commanding stage presence. She turned in a very confident cover of “While My Guitar Gently Weeps” during the proceedings, which underscored the appropriateness of her winning the award.

Freightrain took the honor of Band of the Year. Led by monster bassist and front man Robert “Freightrain” Parker, the band is a regional treasure on the blues scene and also won Album of the Year at the 2018 Indigenous Music Awards held in Winnipeg, Manitoba, Canada—for a live album recorded at (where else?) Sportsmen’s Tavern! Band of the Year is another feather in their cap.

The surprise winner of the night for the Jim Lauderdale Songwriter of the Year Award was … little ol’ me. I had no idea I was even in the running. The morning of the show I boarded an Amtrak train at 6 a.m. at Penn Station in Manhattan in order to arrive in Buffalo at 3:15 p.m. My urgency was to make it there in time to sing “Hey, Good Lookin’.”

After that was over with, I was hanging out in the alley having a beer and shooting the breeze with folks when Steam Donkeys keyboardist and new SAM Foundation Board member Dan DeLano poked his head out and said: “Buck, you might wanna come inside.”

I about fell through the floor when Board Member and JAM Editor Elmer Ploetz introduced me as this year’s recipient. To be so recognized by the local music community of which I’m so pleased to be a part is a very humbling honor.

All I can really say is thank you to my wife Heather, daughter Sophie, my family, friends and bandmates—for giving me the support, encouragement, love, and perhaps most importantly, the material, from which to write songs. I am forever grateful.