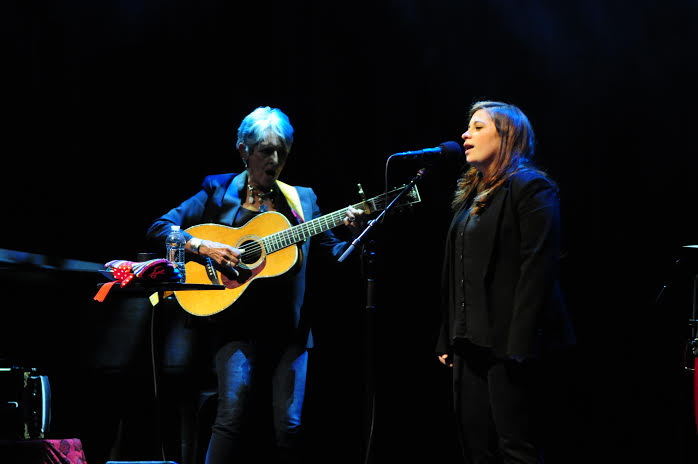 Buckwords: A Conversation with Grace Stumberg

This month I’m pleased to offer a little interview with a hometown singer-songwriter who is well known for her musical talent, her notable work ethic and her friendly disposition. She kindly agreed to conduct this exchange in the form of emailed dispatches during this summer’s European tour with folk music legend Joan Baez. Without further ado, here’s Grace Stumberg…

BQ: Could you please tell our readers where you are right now, why, and what you’ve been doing up to, say, the last 24 hours? 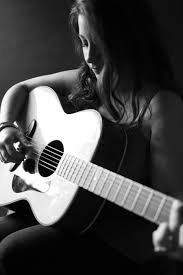 GS: Currently in the band green room in Ghent, Belgium, for a music festival singing back ups for Joan Baez. In the last 24 hours I was in Montreux, Switzerland, for the Montreux Jazz festival for another performance. I got to meet Shania Twain, my pre-teen idol, and Billy Gibbons from ZZ Top. His business card only had his name and says “Friends of Eric Clapton.” Made us chuckle! After that, it was a 10-hour drive to Ghent and the first night of “Bus Sleep” in which we all wake up feeling like zombies. We had an early sound check at 1 p.m. and the show isn’t until 10:30 p.m., so the whole tour group does their own thing. Some ride bikes. Some walk. Some gym-it. Joan rests and meditates. It’s been a long day leading up to the show, as most show days are. After tonight, we hop on the bus and head to Königswinter, Germany, for a much needed day off of travel. Jet lag is still kicking our butts!

BQ: How about you give us the backstory? How did you come to play with Joan, what this tour is, etc.?

GS: I started working with Joan as a personal assistant. I was found by her tour manager, who lives in Buffalo, and who had heard about me through some friends. Joan was looking for a young person who could tune guitars and assist because her previous assistant was quitting. I was strictly informed not to mention any musical ability whatsoever. I wouldn’t have wanted to, anyway. I never wanted to be “that” person who says, “I’m a singer too!” Can you imagine how often a famous person hears that? I also was guitar tech-ing. First tour was to London and a tour of the UK. It wasn’t until years later one of Joan’s friends heard me messing around on a piano, singing in a dressing room and told her I could sing. After that, I was singing with her for years to come at shows. I still am! This is her final farewell your. Yes, she is actually retiring and means business about that. She’s 78!

BQ: When you aren’t on the road with Joan, you maintain a very busy schedule performing gigs around town and regionally. What’s it like switching gears from, say, a big European concert hall to a local bar gig? I imagine there must be pros and cons to both experiences. What do you think?

At the Ninth Ward / Studio 112 Photography

GS: Switching from places such as Royal Albert Hall to Talty’s in South Buffalo is quite the jump. I love that both the touring and home worlds exist. Singing with Joan in front of thousands of people is an amazing experience. I also love coming back home and picking up the guitar. I miss rocking out while on the road. I miss singing my own songs. Coming back home after touring is a quick fix for “getting it all out.”

BQ: You’re well respected for your original music. Do you have a preference for playing solo versus with a full band? (If “preference” is the wrong word, can you explain how the experiences differ for you?) Also, what methods do you employ to get your music out there to fans and the general public?

GS: I don’t really have a preference for playing with a band over solo acoustic. There’s nothing like plugging in the electric and turning things up a bit. It pulls out the rock and roller in me. I also love to have only my voice and an acoustic guitar and lay it back a bit. When it comes to sharing my music with folks, I sell CDs out of the trunk of my car (haha). I hope people come to shows. I’m terrible at social media and YouTube videos. I guess you could say I’m old school.

BQ: You’ve experienced a lot of success as a young artist. Are there any tips you’d like to share with young musicians who have a similar desire to share their music but just don’t know how to begin?

GS: What I’ve learned is to write, write, write. Hone your craft. After that, hit the studio and record those babies! Book gigs where people want to listen. Book them at places that have people that are open to originality. Bring along your CD and share it with people. Nowadays people do the download cards or get music on Spotify, Apple music, etc. Most of all, be kind, always on your game, and chat with everyone. Get to know people and make friends! Those friends will follow.

GS: Now that the end of touring is near after eight years, it’s really starting to hit me these last few shows. My throat wells up as I walk up to the microphone. What’s next? I have no idea. The giant looming question mark of the future. I am keeping a clear head and am grateful to have been able to travel and sing with my dear friend Joan and the tour family. I’m going to miss this terribly and wondering myself what’s next. Whatever it is, I’m going to make it great!

You can keep up with what’s next for Grace by visiting gracestumberg.com.