Bookshelf: The Producer – John Hammond and the Soul of American Music

The Producer
By Dunstan Prial

Why a book review of a 14-year-old book? Three reasons: 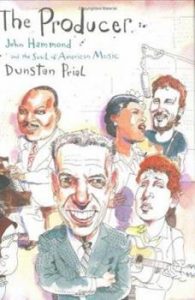 The subtitle: “John Hammond and the Soul of American Music,” says it all. Born into a family of wealth and privilege in 1910, scion of the Vanderbilt fortune, Hammond would spend the ensuing decades of the 1920s, ’30s, ’40s, ’50s, ’60s, ’70s and ’80s listening, discovering and producing music at the very center of American life. As a boy, he discovered “popular” or “race” music through the servants in the mansion. He would sneak off to Harlem to hear early jazz and blues. His connection and love of “new” music were immediate and powerful.

When telling the story of how he “discovered’ Billie Holiday, Hammond always cited serendipity as the primary factor in his chancing upon her that night. ‘My discovery of Billie Holiday was the kind of accident I dreamed of, the sort of reward I received now and then by traveling to every place where anyone performed’

“She was 17 when I first heard her … She was just unbelievable, she phrased like an improvising instrumentalist. She was the first singer I ever heard do that! To me she was unbelievable!”

Springsteen took a bus into New York Cit for a meeting with Hammond at Columbia Records, a guitar with no case on his shoulder.

Hammond recalled, “I was just absolutely knocked out. I can’t tell you. It was just ridiculous. I’ve heard so many hundreds of people and he’s the first guy who’s ever come through to me this way, much more than Bob Dylan … because I’ll tell you there’s an integrity about Bruce that comes through as soon as he opens his mouth.”

This book tells so many intimate detailed stories. After reading this wonderful biography of an American giant, I had to ask myself; How empty would the world be without John Hammond? If you don’t laugh and cry a dozen times you do not have a heart.