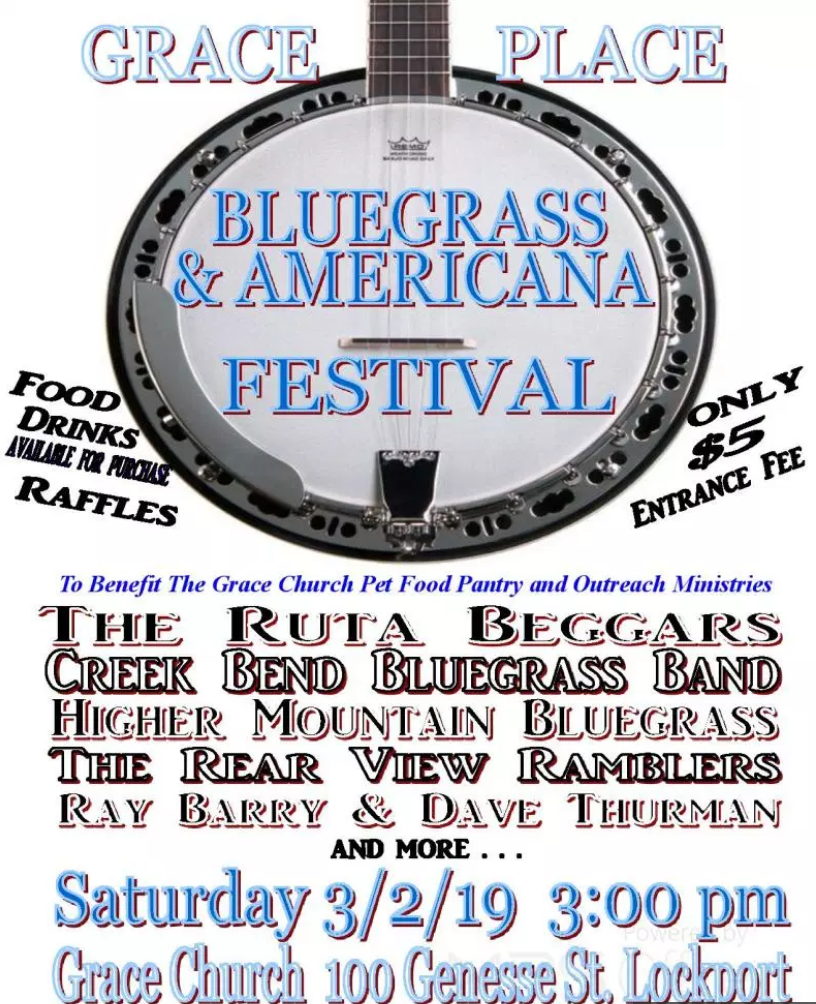 Bluegrass music in Buffalo? We don’t say “y’all” and our daddies in most cases did not sit around the cabin playing fiddle or banjo. We do have a pretty significant slice of the population that identifies with fast banjo picking and high, lonesome vocal singing about life in the hills and on the farm.

Bluegrass music is a feeling. Bill Monroe mixed styles back in the 1940s to excite audiences in the states of Kentucky, the Virginias, Tennessee, basically the rural south. He blended tight brother-style vocal harmonies with note-bending blues, Scotch/Irish fiddle tunes with the jazz and swing of the day to make his own brand of music. He kept the instrumentation locked into his vision and wrote many songs and instrumentals, but borrowed what he knew worked. This blend is what became known as bluegrass.

With audio and video recordings, the bluegrass festivals all over the world and now the internet, bluegrass music is as comfortable in Buffalo as it is in Hazard County, Kentucky.

We have monthly (Bennington and North Collins, N.Y.) and even twice a week bluegrass jam sessions (Springville, N.Y.) no more than 45 minutes from downtown Buffalo. We have national touring bluegrass bands that have been making Buffalo a preferred stop on their way from the U.S. to Canada for decades.

I am thrilled to have this opportunity to share with you some of my insight on what’s happening in bluegrass music in the Buffalo area. I will begin with some upcoming shows in March of 2019.

I’m also happy to remind everyone that the Sportsmen’s Tavern not only brings in national bluegrass acts such as Town Mountain from Ashville, N.C. (coming on March 7 at 7 p.m.), but they also present the Buffalo Bluegrass All Stars (Doug Yeomans, Phil Banaszak, Rich Schaefer and Mark Panfil) every first and third Thursday of the month for a lunch time show.

The future of bluegrass music lies in the hands of the young. Thanks to a grant from the Sportsmen’s Americana Foundation, the Buffalo Bluegrass Youth Ensemble has enjoyed four master classes on bluegrass fiddling from Phil Banaszak, member of the North American Fiddlers Hall of Fame and former New York State fiddle champ.

The Buffalo Bluegrass youth Ensemble is a free club for student musicians grades 5-12 that meets twice a month during the school year. The students learn to play and sing bluegrass from written music to totally by ear on fiddles, guitars, banjos, mandolins, bass, cello and violas.

I guess it should come as no surprise that there is a strong bluegrass music presence in this area in light of how strong the live music market is in the Buffalo area in general. At one time, we even had a three-hour bluegrass radio show produced from the University of Buffalo. When that show went off the air back about ten years ago, a new website arose that includes upcoming shows, news and all things bluegrass. The site is www.BuffaloBluegrass.com and everything I mentioned in this first article and much more can be found on that site.

So, as always, let’s all support live music in Western New York and check out some bluegrass. To all of you newcomers … you might just find you like it!