Back in the summer of 2004, my wife Cheryl and I were attending the Grey Fox Bluegrass festival in Ancramdale, N.Y., about two and a half hours north of New York City.

I had been teaching dobro to kids at the festival that afternoon, and Cheryl was shopping. Earl Scruggs and some of his sons were on the main stage, and after the set Earl and his wife, Louise Scruggs, were selling autographed banjo heads. Cheryl talked to them a couple minutes and bought me that autographed banjo head. I think it was $25 dollars and I was understandably thrilled when she gave it to me that afternoon.

And that is how it started. From that day on, I brought that banjo head with me to many workshops and concerts. Here is a little history of these iconic banjo players and where I got them to sign this banjo head. The numbers are not on the head itself but only on my photo of the head, and each number is placed as close to the first letter in the name as I could get it. The numbers do not reflect the order of when I had the players sign it. 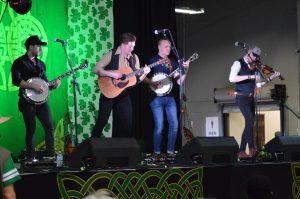 On Tuesday, Nov. 9, the Irish Bluegrass band Jigjam will return to the Buffalo Irish Center in South Buffalo. Last time they were here, they brought the house down with the hard driving power and instrumental prowess of their performance.

On Saturday, Nov. 20, Creek Bend will present a concert at the West Falls Center for the Arts in West Falls.

The Buffalo Bluegrass All Stars return to the Sportsman’s Tavern on Nov. 4 and 18 for lunchtime shows, noon to 2:15 p.m.

If you are looking for a good bluegrass song to look up for this fall season, how about trying the song “Thanksgiving” by Creek Bend or the song “God’s Coloring Book,” written by Dolly Parton and recorded by the Country Gentlemen. With Veteran’s Day coming up, you might consider listening to “More Than Just a Name on the Wall” by Dailey and Vincent.

This past October another great bluegrass musician moved up to the angel band. Phil Leadbetter was a three-time dobro player of the year for the International Bluegrass Music Association. He played with the Grandpa Jones Show, the Vern Gosdin Band, J. D. Crowe and the New South, Wildfire (founding member), Grasstowne (founding member), the Whites and the Dale Ann Bradley Band.

He was a five time cancer survivor and a very inspirational player, teacher and person. You will enjoy anything you hear by him, but perhaps start with “I’m a Ramblin’ Rolling Stone” and his version of “Closer Walk With Thee.” He died of Covid-19 on Oct, 14, 2021.

As this summer and fall fade into winter, I hope the local live music scene continues to rebound after the last 18 months or so. I hope to see you at a live concert soon, and I truly wish you good health and happiness and above all great music.