By Elmer Ploetz November 2, 2019 No Comments

The fall is traditionally the time of year that the crops were harvested and people celebrated with parties, family dinners — and barn dances! Well, bluegrass is still is a part of that tradition. Live bluegrass has appeared and continues to appear at several fall craft shows and square dances.

But first a recap:

Hopefully you had a chance to see the Yonder Mountain String Band at the Tralf on Oct. 16 and Tony Trischka and his band on Oct .25. They’re two very highly respected national bluegrass acts.

The winners of the International Bluegrass Music Awards were announced earlier this past month. Worth noting to Buffalo audiences would be Billy Strings being named bluegrass guitar player of the year. He was a featured artist at the Cobblestone Music Festival this summer in Buffalo.

Also, Joe Mullins and the Radio Ramblers received Entertainers of the year. Joe and his band recently played the Higher Mountain concert series in Clarence Center, N.Y. His latest CD is entitled “For The Record” and is an excellent project that includes a collaboration with Del McCoury on the song “The Guitar Song.”

Another winner who has recently been hosted in the Clarence Center Concert Series is the band Sideline, which won song of the year with its original song “Thunder Dan.”

Coming up in November you can square dance to live bluegrass for free at Wayside Presbyterian church in Hamburg on Friday, Nov. 1, , starting at 7 p.m. with Creek Bend.

The next night, Creek Bend travels to Niagara County to the Community Fellowship Church in Gasport for a concert and dinner, open to the public. The Bluegrass All-Stars play every first and third Thursday’s of the month at the Sportsmen’s Tavern, starting at noon for bluegrass lunch. (that’s TONIGHT if you’re looking at the web version of the JAM on the day it goes online). 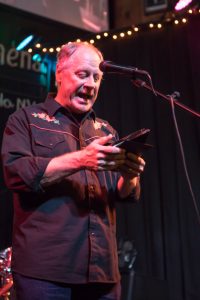 On a personal note, I would like to acknowledge and publicly thank the Sportsmen’s Americana Music Foundation for naming me the Educator of the Year at the awards ceremony in October.

The SAM Foundation supports many local programs teaching kids and adults how to play Americana music. They have brought guitar instruction to veterans and blues harmonica for kids at the West Falls Center for the Arts, helped the Buffalo Bluegrass Youth Ensemble bring in guest master artists, sponsored fiddle master classes at the Buffalo Niagara Heritage Village, organized and supported Rock and Blues classes at the International Preparatory School at Grover Cleveland High School and brought folk music to kids at the Valley Community center in the First Ward. These are just some of the projects they organize and support. I’m proud to be a small part of this wonderful Foundation.

On the sad side, we lost two local bluegrass banjo players this past month. Dick Boehm, an attorney, avid sailor and Vietnam era vet who picked banjo and volunteered his time and talents to the Buffalo Bluegrass Youth Ensemble, passed away after a long illness.

The second was a banjo player born in Williamsville but who spent most of his adult musical life in the Chicago area. Mike Sweeney played five-string banjo, guitar, dobro and fiddle, with years of playing with the pros in Chicago before he moved back to Buffalo in 1989. He could be seen playing around Buffalo in pick-up bands and his regular band, Fools Like Us.

We salute these bluegrass musicians and send our thanks and condolences.