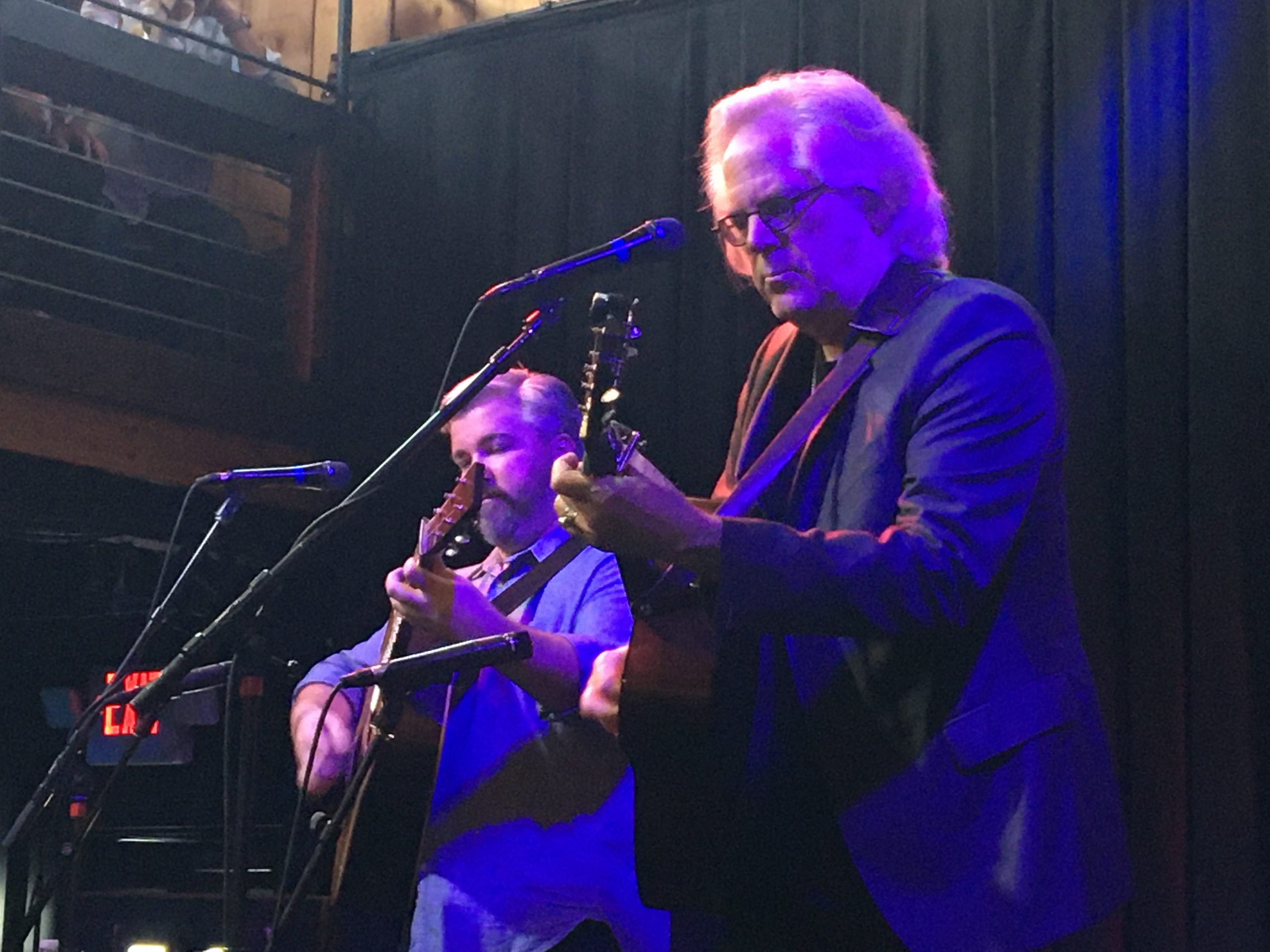 I’m writing this blog on a beautiful late April afternoon with the sun out, kids outside running around and my heart is racing with thoughts of summer and picking banjos and guitars outside again. Bluegrass festivals will spring up all over the country, Canada and Europe. Our nearby festivals can be viewed RIGHT HERE on the buffalobluegrass.com page.

On another beautiful, warm day this past April, the Sportsmen’s brought a Bluegrass super group into Buffalo. The John Jorgenson Bluegrass band played on Sunday the 24th to a very appreciative crowd of Bluegrass devotees. Here is a short review of the concert:

The band started the set with the smoking hot “Listen to That Beautiful Sound,” written by Jorgenson and banjo player Herb Pederson. The second song, written by Chris Hillman and Stephen Stills, was “It Doesn’t Matter.” The quartet, led by Jorgensen on a beautiful Gibson F5 mandolin, split the one-verse solo three ways, passing phrases from Pederson to Jorgenson to Jon Randall (on guitar), building even more energy into this song.

The next song, “Wandering Boy,” featured solid three-part vocal harmonies. It was written by Rodney Crowell, who Jorgenson proclaimed the best American songwriter. Pederson demonstrated a subtle technique on banjo using his Scruggs D tuners in the licks he was using to play a backup to the singer’s vocals. 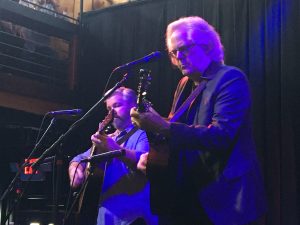 The quartet, rounded out by Mark Fain on upright bass, paid homage to Tony Rice in the next song, written by Pederson, “Old Train.”  Rice was an innovative Bluegrass guitar player, heavily influenced by guitar master Clarence White. Rice’s version of “Old Train” from the “Manzanita Bluegrass” album is a gold standard in guitar playing. Jon Randall executed the Rice solo almost verbatim to the delight of the Rice fans in the crowd.

Soon, after a fast, all-instrumental version of the popular Bluegrass jam tune and folk classic “John Hardy,” came one of the songs many of us were hoping would be played. The song, “Wait a Minute,” was written by Pederson and made famous in Bluegrass by the Washington, D.C., band the Seldom Scene. It’s a slow ballad that the Seldom Scene played with close, three-part vocal harmonies, a haunting dobro solo and lyrics that told a sad story that musician’s and their spouse’s have to live far too often. The lyrics to the chorus are, “Wait a minute, did I hear you say you’re goin’ far away again. Try to change it. I can’t take the lonely nights without your love.” 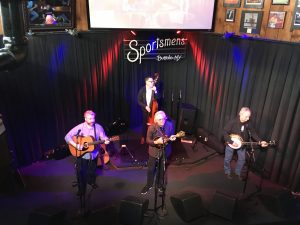 At that show at the Sportsmen’s Tavern, Pederson told the story that led to the song. He was and still is a popular sideman and multi-instrumentalist, going out on the road with whichever big name needs the instruments he can play. He had just finished a tour with Johnny Rivers and three days after getting back to town, he told his wife that he signed on for a month-long tour with Jonathan Edwards. Her response, among other things, was, “Wait a minute!” He wrote the song based on those three words and in his words, “the marriage didn’t last, but the song did.” The crowd that afternoon laughed and sat back to hear the composer and this super band delight us with beautiful harmonies and soulful solos on “Wait a Minute.”

There were many more highlights that afternoon, one of which was hearing the beautiful song, “Whiskey Lullaby,” that Alison Krauss and Brad Paisley recorded, sung by the composer, Jon Randall. Other highlights included Bluegrass standards “I’m Going Back to Old Kentucky” and “Midnight Flyer.” The encore song, “Don’t This Road Look Rough And Rocky,” ended with only a solo banjo and three-part vocals on the last chorus.

A few things stood out about this show. None of the instruments except the bass were plugged into the sound system. Therefore you heard the instrument’s tone played through a simple microphone. The players mixed the band by themselves by how close or far they were from the mics. Sound man extraordinaire Tony Coniglio had every nuance of the performance and the room set to perfection, and he worked with this supergroup to make it perfect in its simplicity. 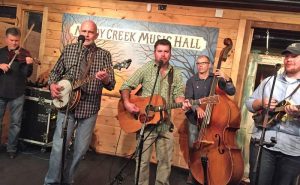 The Sportsmen’s Tavern has shown dedication to bringing great music to Buffalo and, from my perspective, shown faith in Bluegrass through the bi-weekly Bluegrass lunches and booking of touring groups like the John Jorgenson Band, the Slocan Ramblers and the Rob Ickes and Trey Hensley duo. Rob is 15-time IBMA dobro player of the year and Trey is a fantastic singer/songwriter/ guitar virtuoso. They are coming to the Sportsmen’s on Wednesday, July 13, at 7 p.m.

On Sunday, May 8, will be another open Bluegrass jam session sponsored by the WNY Old Time and Bluegrass Music Association at Bennington Lanes in Bennington N.Y. It starts at 2 p.m. and runs right up until 7. Jam sessions break out in the bar room and bands and singles will be taking the stage in the dining room.

On Thursdays May 5 and 19, the Buffalo Bluegrass All Stars take the stage at the Sportsmen’s Tavern playing from noon to 2:15 p.m. Sally and Rich Schaefer, along with Doug Yeomans and Mark Panfil, play traditional Bluegrass and Americana on fiddle, banjo, dobro, guitar and upright bass. 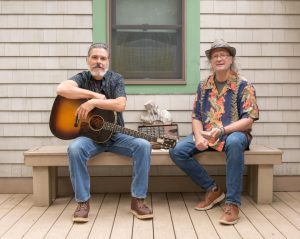 I’m hoping to see a lot of old friends and to meet some new friends as we are playing throughout Western New York this summer. Please check www.BuffaloBluegrass.com for all things Bluegrass in WNY.

Till next time, have a great month and keep on pickin’