The high and lonesome in WNY

The past month featured some great moments in bluegrass in the Buffalo area and some that make us say thank you for what we had.

March started out with a first of the year bluegrass festival, the Grace Place Festival in Lockport. The local bands really delivered great shows from the Rear View Ramblers, Higher Mountain, Ray Barry and Dave Thurman and Creek Bend.

A group of college student musicians from Berklee College of Music in Boston, Mass., the Ruta Beggers soon won over the crowd with their technical skills and highly polished stage presentation. The location was in the beautiful Grace Episcopal church and the crowd was made up of Niagara County long time fans and new fans from the church itself.
In April besides seeing the Buffalo Bluegrass All Stars at the Sportsmen’s Tavern on the first and third Thursday’s for lunch time shows, you might also want to check out these bluegrass concerts of note. 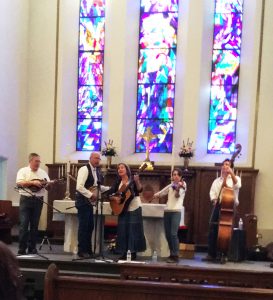 Six-piece powerhouse, traditional bluegrass band Sideline, from Asheville, N.C., and whose award winning members have toured the world and played on the famous Grand Ole Opry multiple times come to the Clarence Center Akron Mennonite church in Akron on Thursday, April 25, at 7 p.m.

At the end of the month, the Sportsmen’s Tavern brings in The Probables. Fans of the Great Blue Heron Roots Music Festival will be familiar with this rhythm-driven, folkcana/roots rock band from Jamestown. They take the stage on Saturday April 27, at 9 p.m.

It is with a sad note that we said a final goodbye to Ernie Weber, local country and bluegrass legend, on Feb. 1, 2019. He and his brothers, Fritz and Wally, entertained countless country fans over many years. In 2016, the Americana Music Foundation presented him with its Bill Kirchen Pioneer of the Year Award.

As always you can read about local bluegrass jam sessions and see more dates on the calendar at BuffaloBluegrass.com.