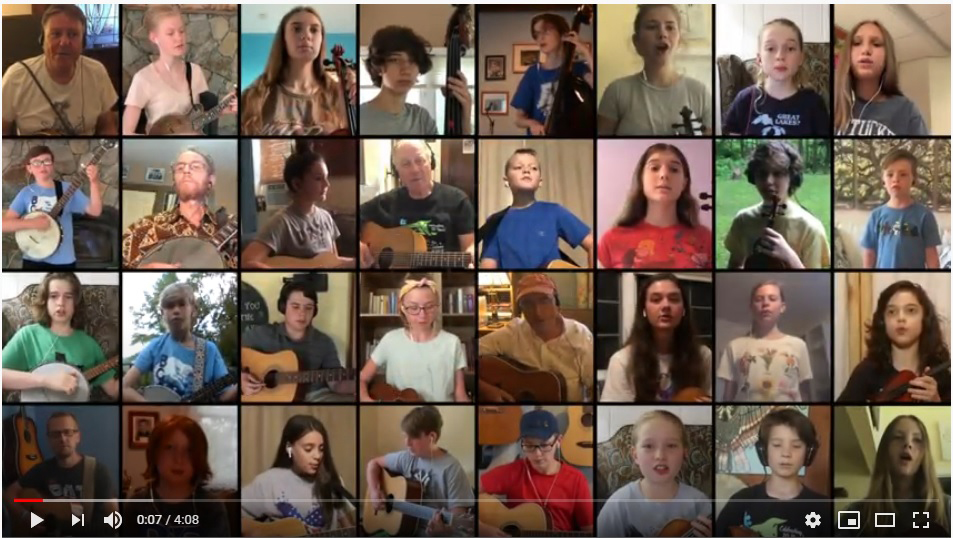 Well, it’s been a heck of a spring and summer so far.

Virtually every Bluegrass festival and music festival since March has been canceled. Countless gigs have been postponed and we went into quarantine.

But along with many tragic stories of Covid-19 appearing in the nightly news and Facebook, life went on. Babies were born, pizza and chicken wings were consumed, a bottle of wine or a six pack was emptied and music went on.

I learned more about online music sources than I ever thought possible. I even sat outside of my tent trailer in my driveway and enjoyed the Grey Fox Bluegrass festival as my friends from all over the eastern seaboard watched the performances with me. 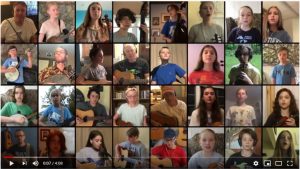 The Grey Fox Bluegrass Academy for kids paired up with our Buffalo Bluegrass Youth Ensemble.

We joked, watched in amazement as our bluegrass heroes played shows from the past 20 years of Grey Fox and even presented a new performance of the Grey Fox Bluegrass Academy for kids paired up with our Buffalo Bluegrass Youth Ensemble in a stack of 32 separate videos playing “Keep on the Sunny Side” by the Carter Family as a cohesive band.

I met up with four friends I knew from a trip in 2017 to Cosenza, Italy, to assemble a version of “Old Home Place” for YouTube. The translations of the comments on Facebook are priceless. My banjo was a “regal insertion.” You bet! These guys play great bluegrass, sing in English and embody the welcoming spirit of music and especially Bluegrass. 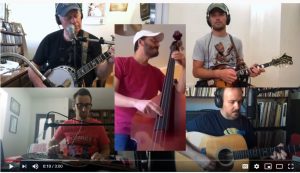 The Muleskinner Boys, from , Cosenza, Italy, with Mark Panfil.

These past weeks have also brought to light the unfinished promises of “life, liberty and the pursuit of happiness.” An individual that Bill Monroe, the father of Bluegrass music, often cited as a major influence to his development of Bluegrass was a black musician named Arnold Shultz. Monroe fused Irish/Scottish fiddle music with the blues he heard in rural Kentucky, much of it through the playing and tutelage of Shultz. This spring the International Bluegrass Music Association (the IBMA) Foundation announced the formation of the Arnold Shultz Fund, established to support activities increasing participation of people of color in bluegrass music.

With the summer progressing and our number of Covid cases decreasing, there are limited live Bluegrass music performances.

The Buffalo Bluegrass All Stars have returned for lunchtime shows at the Sportsmen’s Tavern, with one scheduled in August on Thursday,  Aug. 6, beginning at noon and returning to every first and third Thursday of the month beginning in September. The Panfil Brothers are playing outdoor shows at the Grandview Golf course in Angola on Thursdays Aug. 6 and 13 from 5 to to 8 p.m. They are also playing Sturgeon Point Marina in Evans on Wednesday, Aug. 12, from 6 to 9 p.m. The Pointless Brothers are playing the Town Gazebo in Grand Island on Tuesday, Aug. 4,, from 6:30 to 8:30 p.m.

Sadly, the Mayville Bluegrass Festival at the Big Inlet Brewery for  Saturday, Aug. 15,, has been canceled.

Stay safe and see you either in person or online.