Well, I have to say I didn’t see this coming. Probably most of us didn’t.

I had all kinds of exciting bluegrass shows coming to Buffalo in April 2020. Well, not any more.

So what do we do? What am I doing?

I’ve been staying in the house spring cleaning. Went through a bunch of CDs I’ve been meaning to get through. Listen to them, keep some, recycle some. Clean my music room, my banjo and other instruments that have needed it for years. So, what else?

One thing I’ve been enjoying through this time of isolation are the nightly live concerts that people are putting up on Facebook.

I’ve watched John McEuen from the Nitty Gritty Dirt Band singing, playing, showing old photos from the road and telling stories about the 50 years he spent with them, breaking ground with the “Will The Circle Be Unbroken” recordings and being the first American band to tour the USSR in 1977.

Doug Yeomans offered us a live solo concert by his fireplace from his home in Orchard Park. 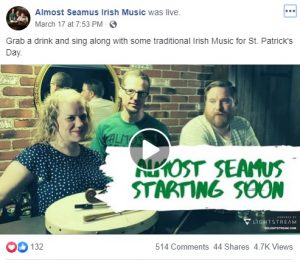 Almost Seamus went live on St. Patrick’s Day night to benefit Buffalo musicians through “Band Together Buffalo.” I’m still recovering from that one.

On Sunday, March 23rd, Tyler Grant from Colorado offered us all a chance to jam along on bluegrass standards with him from 8 p.m. to 11 p.m.

At the same time, Garth Brooks was live online on Facebook taking requests.

These are the ones that I caught but there are many more coming up every night.

These live shows are great on many levels. The music is great. Everyone from Garth Brooks to our local musicians are on the same playing stage, so to speak. An acoustic guitar, maybe a banjo, a voice, a song and maybe some harmony from a spouse. You get a front row seat. Your seat is as good as anyone in the audience.

Put on your head phones and the sound is probably as good or better. You get to interact with the performer and others in the audience.

Many of the performers take requests and will give a shout out to someone or a comment that stands out. I felt like I was in middle or high school, passing notes in the back of the class to my classmates. Laughing at comments made on screen or in private messages to friends watching in real time with me.

Last but maybe most importantly, some of the local and regional performers are out of work like so many others in the country and worldwide. They offer up a virtual “tip jar” in the form of a Paypal or Venmo contribution. This money goes right to the performer or to a good cause, as in the case of the Almost Seamus live show.

These shows are going on every day and night on Facebook. Check the Facebook page buffalobluegrass.com to see what’s on tonight.

As in any kind of music, there are the “gateway” songs, artists and recordings. In the blues, people tell me they’re Stevie Ray Vaughn or B.B. King or The Blues Brothers!

In bluegrass, how about these “gateway” suggestions? If you like the Grateful Dead, check out the Old and In the Way recordings with Jerry Garcia on banjo; start with the song “Wild Horses,” a Stones cover.

If you like Chris Stapleton’s music, check out anything by the Steeldrivers, like the song “Heaven Sent.”

If you like the jazz that Bela Fleck and the Flecktones have been playing, why not listen to the New Grass Revival with him and Sam Bush, perhaps doing the song “Hold To a Dream.” The movie “O Brother, Where Art Thou?” and its soundtrack are both worth revisiting, too.

On Youtube, where many of us are spending hours going from video to video, watch two of the hottest young artists, Molly Tuttle or Sierra Hull.

If you like to chuckle as you hear great playing, check out the Cleverlys.

Your local artists have CDs for sale too. Go to their websites or Facebook page and ask for a disc or a download. Pay them on Paypal or send a check. Rumor has it that the Panfil Brothers have a new one available by request.

To the many friends who have been attending our live shows for the past 40 plus years, stay in, tune in, stay safe and we’ll see again when this is over.

In the mean time, I hope to see you at a live bluegrass show online.