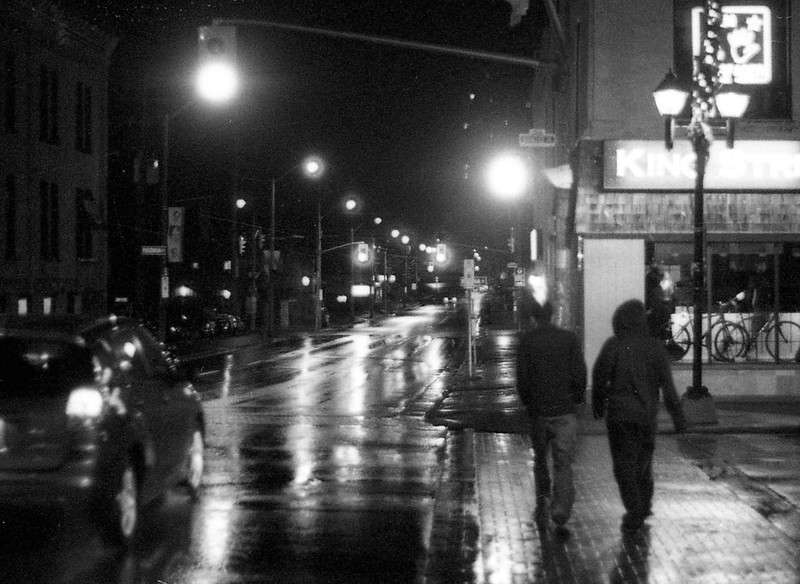 The onset of love can be as unpredictable as the path of lightning. World literature is filled with examples of great loves that seem to have been preordained. When reading about these legendary relationships we get the sense that these couples were destined to be together — that their union was as unavoidable as the formation of distant stars that burn with the passion of a thousand suns, fixed in the darkness of space, twinkling in our night sky beyond our shimmering moon (even as our oceans yearn for and reach up as tides toward that unattainable white satellite).

Often, these great loves come about unexpectedly and against all odds. The characters are frequently on divergent life paths when suddenly they come within one another’s orbit out of pure happenstance. But it is enough. That momentary friction is enough to set into motion the great wheel of fate that will spin the fibre of their beings tightly together like a string of the finest thread, destined to be woven by the breathless hands of time into the beautiful fabric of love.

And so it was, dear reader, that I saw her just a few weeks ago. I’d stopped into a little shop while I was on a secret mission to pick up an anniversary present for my wife. My pretext for going there was to provide me with an excuse to leave the house. I couldn’t very well divulge my true intent by saying “I’m going off to the jeweler’s” or my surprise would’ve been ruined. So I made up a ruse that my wife would believe. I was going out to a specialty store that I frequent in order to pick up something mundane that I use often, but that she has little interest in.

I made a clean exit and headed off to the jewelry store to buy the surprise gift for my wife. The transaction was quick and flawless. On I hurried to my next stop to make my aforementioned purchase so that I could casually display it upon my return, if need be, and thereby cover my tracks.

I cannot emphasize enough the fact that I had no intention of veering from completing my plan to make this a quick stop. In and out. I was steadfast as an oak until I had to wait perhaps one minute while another customer was finishing up ahead of me. 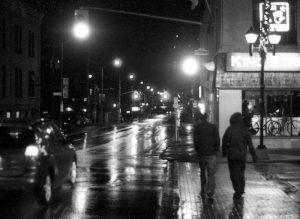 Suddenly I saw her, just hanging, oblivious to the more obvious, indiscrete customer across the room, who was obviously checking her out. I felt my feet stepping out of my place in line and I was then inexplicably picking up and setting down items I had absolutely no interest in, all for the sake of casting nonchalant glances in her direction. I got close enough to see that she was, in fact, even more beautiful up close than she appeared to be from a distance. But she was silent. I longed to hear her voice. I felt my heart racing …

I quickly turned, made my purchase and left. But I couldn’t get her out of my mind. At idle moments I found myself imagining her perched on my lap, feeling her soft curves wrapping around my leg as I gently ran my fingertips up and down the length of her smooth neck, delicately coaxing passionate sounds from deep within the hourglass shape of her glistening body with my other hand. It was driving me mad.

Finally, a week or so after our anniversary, I could take it no longer. I was going on some errands with my wife when my conscience took control and I found myself confessing everything to her: the charade I’d contrived when I left to go to the jeweler’s, and how this chance stop along the way had now grown into an uncontrollable infatuation. I explained that it was nothing I’d planned, but that life sometimes does this to a man.

After a pause, my wife demanded we go to this shop. She wanted to see “it” (as she referred to her) for herself. “Take me to there! I want to see it.”

“What?” I replied, becoming nervous.

“She probably won’t even be there,” I said.

How I dreaded that walk from the car to the shop and the coming confrontation. Was I completely insane? Why would I confess this burning desire for another to her, when at home I have all that any man could ever want? And what if she wasn’t even at the store any longer but had already left there, for good? What kind of fool was I?

Impossibly, the focus of my desire was there. Dark, confident, mysterious. Just hanging.

“It IS really pretty,” my wife agreed. “If that’s what you want, if that’s what would make you happy … then I think you should get it.”

After a little back and forth with Joe, the owner of Allentown Music on Amherst Street, I walked out with both my wife and my beautiful new Alvarez mahogany parlor-sized guitar with built in tuner, fine electronics, sweet leather strap and an extra set of strings. Gig bag included.

Now, I know that it’s a thing. Do a web search using the terms guitars and wives. I know I’m lucky because sometimes they don’t mix. The great guitarist and Nashville producer Chet Atkins used to tell a humorous story about how his wife grew sick and tired of all his guitars and gave him an ultimatum: “Either they go or I go!” He told her he would miss her.

It probably helps that I don’t have what you’d call a big harem of guitars, and I stick with acoustics primarily … so not a bunch of amps and pedals and do-dads all over the place, but still.

Ah, guitars. They’ve been a constant in my life since childhood. I could probably write the story of my life and title each chapter with the name of the guitar I was playing at the time. Some have come and gone. Others have remained with me through thick and thin. 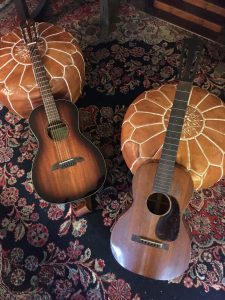 Even before I ever held one, I used to gaze at the case that held my father’s guitar. He didn’t play it very often by the time I came around, but whenever he did I was mesmerized. I fell in love with the smell of the guitar resting on the worn, purple fabric inside that case. It’s a 1932 Martin parlor-sized mahogany guitar that my great-aunt bought for him new when he was 15.

My Dad, whom everyone called Buck, used to play it at barn dances and cakewalks during the Great Depression. He even used to hop on freight trains from his small town in western Pennsylvania and ride them up to Erie to strum and sing on the live radio broadcasts. Yodeling was en vogue then.

That guitar again accompanied him around the world on a destroyer where he served as chief fire commander during World War II. He also strummed it on sandy beaches in Hawaii and used it to serenade my Mom with “My Blue Heaven” when they were young and awaiting the birth of my oldest sister in Long Beach, Calif.,  after the war had ended.

I now have that guitar, but I don’t play it because it needs some work. And I’d never want to take it out to a gig for fear of it being wrecked. Plus, being purely acoustic, it wouldn’t work for use in a live, amplified context.

This new guitar of mine reminds me so much of my dad’s Martin that I couldn’t help but love it. Best of all — and I’ve felt this myself in the past and heard this observation from other songwriters — playing a new instrument can often inspire new songs. It’s proving to be true with this one. I think that’s because having a new instrument is like getting to know a new companion who is there for you, ready to make music together, because you picked her out.

But look at the time! I believe I can hear sighs from the other room because I’m spending all this time pressing my fingers silently on a keyboard. So I bid you adieu for now, dear reader. Vive l’amour!