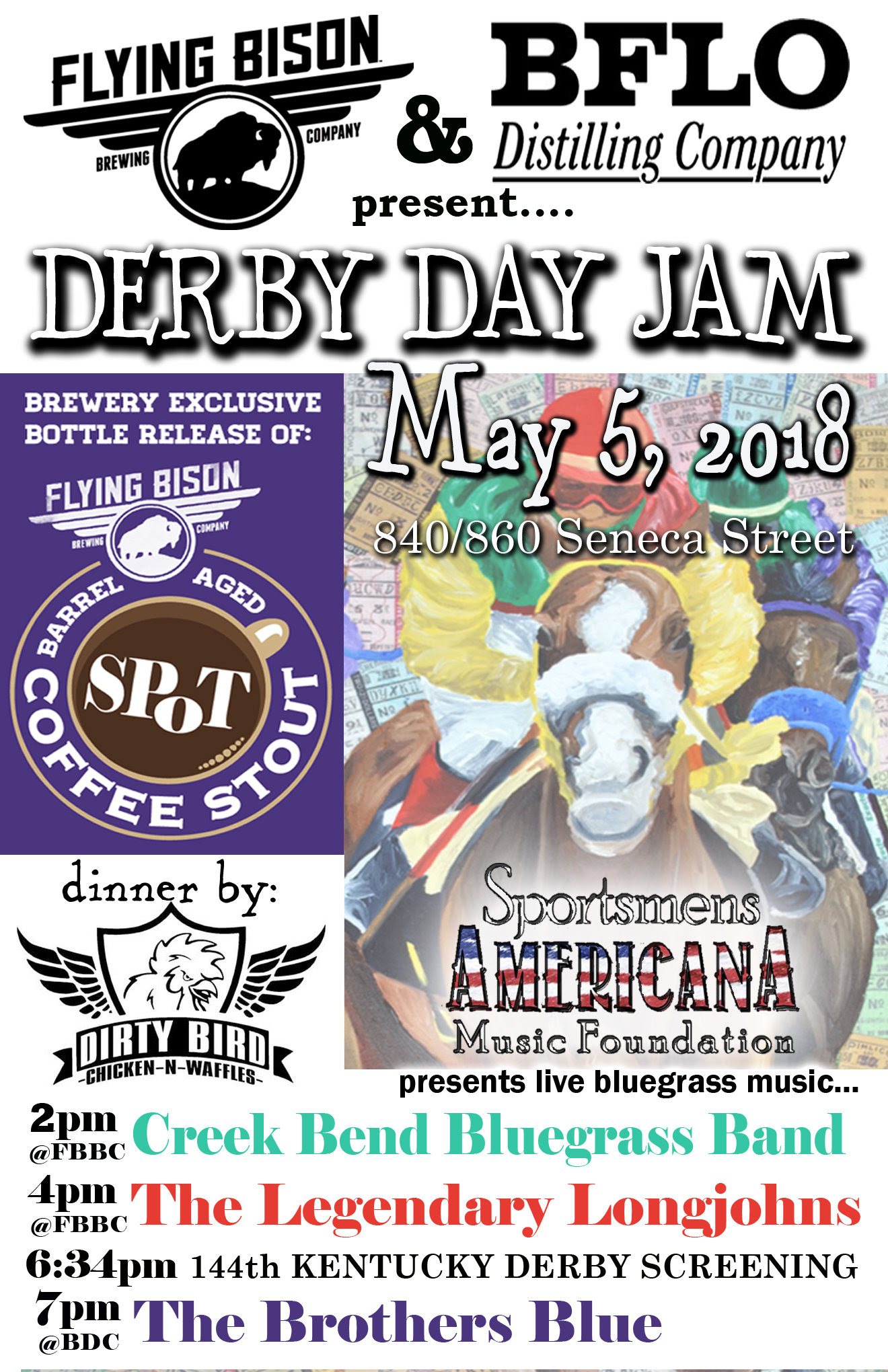 Despite the slow coming Spring weather, we hope we made your days brighter by bringing you music, education and fun this past month. Read on to see all the happenings since our last newsletter and all of the cool events and opportunities you can look forward to.

Below you will read about our successful Emerging Artists night at the Tavern on April 9th, our so-much-fun Americana Room at the Tri-Mainia event on April 14th, and updates on our educational programs.

Again, I urge you to keep your membership up to date and encourage your friends and family to join so that we may continue to grow and do the good things we’re doing.

Our next big event is a collaboration with Flying Bison and Buffalo Distilling Company for the Kentucky Derby on Saturday, May 5th. See ad at top of page. The SAM Foundation is supplying the music and we’ll be there to have a membership sign up table as well. The great Kentucky bluegrass band Creekbend will open the show, followed by a rare local set from The Legendary Longjohns, outside if the weather permits, or in the Flying Bison Brewery. The Brothers Blue will close out the evening with a show inside the Buffalo Distilling Company. SAM Foundation members get a 10% discount on admission for Derby Day and 10% off all food and drink in both the brewery and the distillery, so bring your membership card. Once again, the Sportsmen’s Tavern is offering several free ticket opportunities for our members. The Corn Potato String Band, with Tyler Wescott opening the show, May 21st. Western Centuries on May 23rd and The Howlin’ Brothers on May 30th. If you don’t know these band, look them up, Ken Biringer does an incredible job booking bands for the tavern.

Babeville is offering a pair of tickets for the May 25th show of Johnny Hart and the Mess with our own Ten Cent Howl.

Buffalo Ironworks is offering a pair of tickets for two shows, Beautiful Maladies – a Tribute to Tom Waits on May 5th and the Mumford and Sons Tribute with PA Line on May 25th.

And 189 Public House is providing a pair for Amy LaVere, with Will Sexton, on May 2nd. Email me by Thursday, April 26th at 9 PM to enter the drawing of your choice.

Among many other locations in WNY, nobody offers more support for local artists than the Sportsmen’s Tavern. Every month, on a regular basis, you can see the Joe Baudo Big Band and the Quartet, Buffalo Bluegrass All-Stars, Phil Sims Big Band, Haiku, Buffalo Dead All-Stars, Kincaid, Puleo & Winsick, McCarthyizm, The Willies, Freight Train, Skiffle Minstrels, Five to One, John and Mary & the Valkyries, the Tim Clarke Soultet, Ron Davis Combo, Argyle Street Band, Ron LoCurto,The Informers and many more.

You also have the opportunity to see some of WNY’s great artists at 189 Public House in East Aurora. In the coming weeks, David Miller, The Singlecoils, The Kensingtons, Kincaid, Puleo & Winsick, the Skiffle Minstrels and more will all be appearing there. More locations book local musicians, including Ironworks, Mohawk Place, Larkinville, Flying Bison, Buffalo Distilling Company and other venues throughout the summer. Support live music!

On April 9th, we conducted our second Emerging Artists event at the Sportsmen’s Tavern and it was a fun and successful evening. We started with a solo act, Davey O, went to a duo, The Middlemen, progressed to a trio, Rockabilly Steve and the Blue Roadhouse Trio and closed with the six piece, Copper & Gin. We had a good crowd especially for a Monday night and the artists were all very well received. I really liked all of their performances. Thanks to SAM Foundation VP Don Nelson for working the door and new Board member Patrick Gormley for helping with the introduction duties. And, of course, thanks to Jason Hall and the Hall Family for donating the tavern for the evening.

Our first Emerging Artist night a few months ago featured Tom Callahan, Meet the Bacons, Porcelain Train and Nick Kody. So this is now eight artists with little or no Sportsmen’s exposure who are now part of out Foundation’s efforts to spread the music. We’ll do it again in a few months. Pass the word; we’re looking for new artists who want to play on the stage of the best live music venue around.

In the last couple months, there have been some changes on the Board of Directors of the SAM Foundation and we’ve increased the size of the Board by two. Our founder, Dwane Hall stepped down as Chairman and was replaced by Jason Hall. Dick Donovan stepped down as well and we’ve added Patrick Gormley, Tim Franczyk and Jeff Griffin to the Board. And just this past month Ken Biringer resigned from the Board. The remaining Board members are Robert McLennan, Donald Nelson, Angela Hastings, Bernadette Walsh, Peter Stevens and Anthony Smolen. When you see them around, let them know your ideas for the Foundation. Thanks to Dick Donovan for his service, and he’ll continue to help us with some website issues. Ken has been a great help with getting the Foundation going and will be around to help with booking advice. And especially, thanks to Dwane Hall for his lifetime of support for the WNY Americana music scene and the initial formation of this Foundation. Without Dwane Hall, this organization would not exist.

As has been previously reported, the first few months of 2018 have been a busy time for your Sportsmen’s Americana Music Foundation Educators. The Foundation is very pleased to be sponsoring five multiple session workshops this spring, reaching an unprecedented number of young Western New Yorkers. In total the workshops will represent over 550 hours of musical instruction engaging, at minimum, 75 kids.

We also had several “firsts” this spring: At the Holland Boys and Girls club Doug Yeomans headed up the first Ukulele workshop for kids. The workshop wrapped up its successful ten week run Monday afternoon April 16th with the kids playing the tunes that they had worked on during the program followed by celebratory milk and cookies! Another “first” this season is our partnership with the Buffalo Boys and Girls Club located at the South Buffalo Charter School. Headed up by the multi-talented Mark Panfil the participating students have been learning, americana and even traditional Irish and Polish tunes, how to play guitar, have been introduced to instruments ranging from accordian, the banjo, penny whistles, the rub board and even the Irish Bodhran drum and have even had an impromptu mardi gras celebration!

With four more weeks to go in the program the kids asked if they could put on a performance for their families in the final session and plans are in the works to make it happen.

One other new activity for the Foundation this spring has been our participation in the Saturday morning “Community School” program conducted by PS# 198, The International Preparatory school or I-Prep, formerly Grover Cleveland High School. The program has been a big success for school and it would appear that the Foundation’s music program, consisting of both acoustic guitar lessons and an hour long jam session, is perhaps the most popular program in the Community School curriculum. With four sessions remaining in the schedule, Mark Panifl and Helen Butler have been teaming up to provide the kids with an entertaining, fun and educational musical experience.

With each new session we are attracting lots of new students along with a number of “regulars”. And of course one of the more interesting aspects of the program is that many of the students are the sons and and daughters of immigrants and refugees who have found themselves living and contributing to our community. The experience has served to prove once again that music truly is the universal language!

In addition to the new programs, Tim Pitcher and Alan Whitney are back at I-Prep for the fourth session of the very popular Rock ‘n Roll Workshop. Under Tim and Alan’s guidance the kids not only learn how to play instruments but actually learn how to play as a band. And as they did last year the students are looking forward to participating in the multi-school talent show at the end of the school year. Last year, their performance marked the first time ever that a band performed in the event and they’re looking forward to their encore performance coming up in June.

And last but certainly not least this spring has been the Americana Music Appreciation program at the Valley Community Center. Heading up the program this spring and doing a great job has been Helen Butler. Helen has been teaching the kids great traditional tunes like, This Land is Your Land, Old Joe Clark and Clementine while working with them on rhythm, keeping the beat using drums and shakers they made themselves. Helen has even had them try their hand at writing lyrics ( she got some good ones!). The Americana Music Appreciation program will conclude Tuesday May 8th with a recital for friends, family and Community center staff. Snacks-pizza, soft drinks, cake and ice cream will be served!

Even as we’re only at or just past the midpoint with most of our programs, work has already begun on our summer lineup of educational activities. With The Boys and Girls Clubs of both Holland and Buffalo inviting us back, a two day workshop planned for the Valley Community Center and the prospects of a new initiative focusing on music for seniors, we’re sure to have a solid lineup of programs up and running as we continue our quest of getting instruments in the hands and great music in the ears of kids (of all ages!) throughout Western New York! TRIMANIA and the SAM Foundation, right in the heart of the city, was a great combination. Many of the thousands who attended this outstanding party visited our room to see Shaky Stage, Ten Cent Howl, Steam Donkeys and Miller and the Other Sinners. Fantastic sound provided by Jason Hall. Thanks to our volunteers, Rose McLennan, Angela Hastings, Patrick Gormley, Crystal Smith, Dale Metzger, Carl Graetz, Gerry McCarville, Don Nelson. Artwork provided by Matt Daggett and Joe Necci

Our super stage and sound by Jason Hall was graced by Shaky Stage, Ten Cent Howl, Steam Donkeys and Miller and the Other Sinners.

Here’s your playlist for the week!